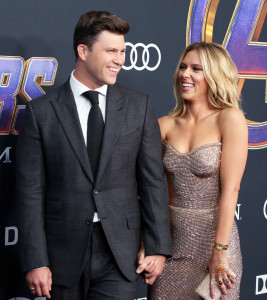 He’s a keeper! Scarlett Johansson revealed how her fiancé, Colin Jost, proposed to her during an appearance on The Ellen DeGeneres Show on Thursday, October 17.

“He killed it,” Johansson, 34, told Ellen DeGeneres. “He did like a whole James Bond situation. He’s got a lot behind that news desk. He’s very charming and very thoughtful and romantic. I was surprised. Even if you kind of imagine what that moment is going to be like it’s still a beautiful moment.”

She added, “It was a very special moment. I think more than anything when someone tells you they want to share the rest of their life with you and that is just is a lovely, special thing.”

DeGeneres, 61, asked when the wedding was so she could “clear her schedule.” However, Johansson didn’t reveal any wedding date details.

Jost, 37, proposed to the Avengers star in May after two years of dating. In an interview with Elle earlier this month, Johansson said she is “happy” and “fulfilled” in her relationship with the Weekend Update co-anchor. She also shared how she was able to portray a woman in an unhappy relationship in her upcoming film Marriage Story when she’s content in her real relationship.

Scarlett Johansson and Colin Jost: A Timeline of Their Relationship

“My ability to compartmentalize comes in handy when it’s time for things like that,” Johansson said. “I’m certainly, obviously, very happy and fulfilled in my personal life, but I’m also a sum of many parts, and able to access different parts of my story and how I got here. It’s all valuable.”

During a standup performance in July, Jost got candid about his marriage anxiety before proposing to Johansson. “I’m getting married, and it’s such a crazy thing,” Jost said at the time. “I was so scared of marriage for so long because every time I talked to someone who just got married, or was about to get married, it’s like, ‘Oh my God, you got to do it … What could go wrong?’”

The couple was first spotted together at the Saturday Night Live season 42 finale after-party in May 2017. Just two months later, an onlooker told Us Weekly they were seen “making out” over the Fourth of July weekend. The pair didn’t go public with their romance until they attended the American Museum of Natural History Gala in November 2017.

This will be Johansson’s third marriage. She was married to Ryan Reynolds from 2008 to 2011 and French journalist Romain Dauriac from 2014 to 2017. She and Dauriac are the parents of their 5-year-old daughter, Rose.