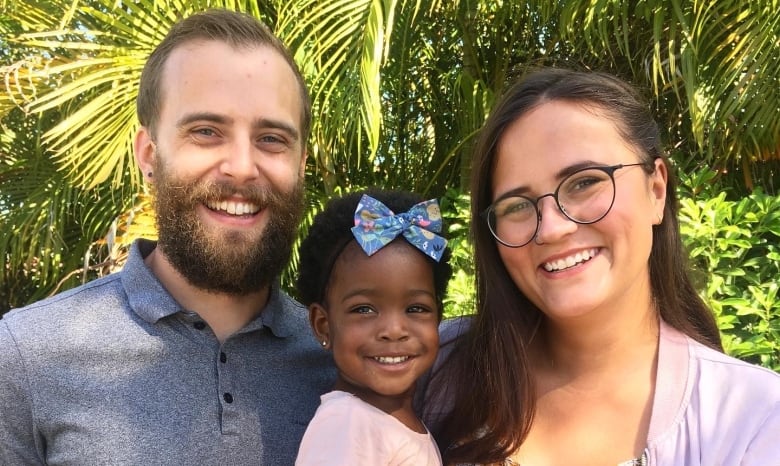 A Canadian woman who is entering the last month of her pregnancy was finally able to return home to Canada, after the federal government granted last-minute temporary resident visas to her soon-to-be adopted Haitian children.

Immigration Canada issued the visas late Friday night as the family was en route to Seattle. After spending the night in the U.S., they were able to rebook a connecting flight to Canada, a spokesperson for the Rural Refugee Rights Network, which has been assisting the family, confirmed.

The family had booked the flight to Vancouver, through Seattle, without certainty that the visas would come through.

Wallace, a midwife originally from Devon, a town west of Edmonton in central Alberta, has lived in Haiti for the better part of 12 years. She and her husband have a biological son, Jean-Jacques, who was born in 2017.

Wallace had hoped to return to Canada earlier in her pregnancy due to concerns that she might not be able to access emergency medical care.

But she had been told by Immigration, Refugees and Citizenship Canada (IRCC) that her two Haitian children couldn’t return to the country with her because their adoptions aren’t finalized.

While that normally wouldn’t prevent them from travelling to the country, under Canada’s COVID-19 travel restrictions, the children — four-year-old Jean-Moise and two-year old Eva-Maria — don’t qualify as immediate family members. In pre-pandemic circumstances, Wallace would have been able to obtain travel visas for the children as their legal guardian.

The IRCC told CBC News earlier in September that international adoptions must be completed in the child’s home country before the immigration process to Canada can proceed.

“In this case, the officer reviewing [the] request for exemption from the COVID-19 travel restrictions was not satisfied that the definition of a family member was met,” a spokesperson had said.

“My whole life is about trying to keep babies with their families, and yet here the Canadian government is forcing me to make an impossible choice between my own health and that of my soon-to-be-born baby and that of my two dependent children,” Wallace had said earlier in the week, prior to her return flight to North America.

She and her family will be self-isolating for 14 days in Edmonton.

While Wallace was able to obtain visas, at least one other Alberta family who travelled abroad to adopt is still waiting to come home.

Derek and Emilie Muth finalized their adoption of two-and-a-half-year-old Zoe in Nigeria last year. But despite her adoption being complete, her citizenship is not yet finalized. Canadian immigration staff have been repatriated from the only government office in West Africa that can finish processing their paperwork.

Zoe has sickle cell anemia, and doctors have written letters advocating for the family’s return to this country, where she’ll have more reliable access to the medication and care she needs.The immigration minister’s office told the family that the IRCC is unable to provide a timeline for when they’ll be able to return.