Buhari just indicted himself in Benue 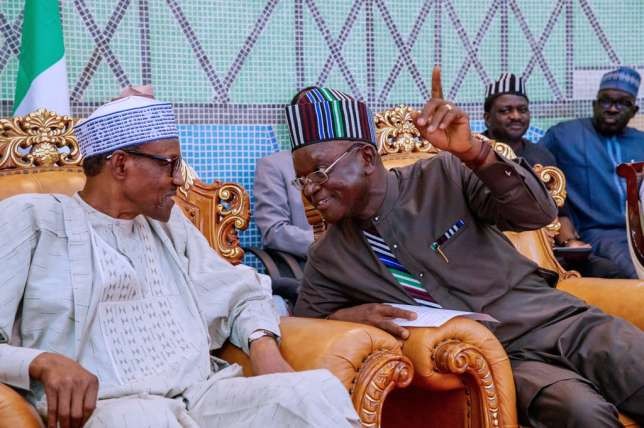 Buhari just indicted himself in Benue

Buhari says he didn’t know that his police chief only spent 24hrs in Benue. There’s no bigger indictment this week.

When President Muhammadu Buhari visited Benue on Monday, March 12, 2018, he lamented that his Inspector General of Police (IGP) Ibrahim Idris, flouted his orders concerning the herdsmen-farmers clashes that have led to loss of hundreds of lives in the north central State.

On January 8, 2018, Buhari asked IGP Idris to relocate to Benue. The order to the IGP arrived just days after rampaging herdsmen ended the lives of over 70 residents of Benue.

“I just met with the Governor of Benue State. I assured Governor Ortom of our total commitment to the security of lives and property in Benue and elsewhere. We have deployed additional security resources to fish out the attackers, bring them to justice, and prevent further attacks”, Buhari declared.

Talking tough, police spokesperson Jimoh Moshood announced that “the Force will not hesitate to deal decisively with trouble maker(s), any group(s) or individual for conduct likely to instigate the escalation of the crisis. The full weight of the law will be applied on anyone arrested for being responsible for the mayhem in the affected areas in the State”.

Instead of applying the full weight of the law in Benue like he had promised, IGP Idris picked up a fight with Governor Ortom as soon as he landed in the State.

Ortom and Idris would spend weeks engaging themselves in a war of words at the detriment of the mission.

The anti-grazing law in force in Benue was the cause of the herdsmen killings, Idris said. Not correct, Ortom averred, before accusing the police boss of taking sides with the killers.

Ortom would later state that when IGP Idris was deployed to Benue State, he didn’t spend more than a day in the troubled State and refused to arrest the culprits of the violence who had been identified by the State government.

As tempers flared, Ortom said: “With his latest demand that the ranching law of Benue State be suspended, it is now clear where the loyalty and interest of the Inspector-General of Police lies – certainly not with innocent Nigerians.

“He has now positioned himself not only as the mouthpiece of those who are killing Benue people, but indeed as their shield. Little wonder herdsmen still proudly carry sophisticated weapons and willfully terrorise innocent people in the state without being arrested.

“We wish to place it on record that contrary to the directive by President Muhammadu Buhari that the Inspector-General of Police should relocate to Benue to ensure that the killings stop, the IGP spent only one day in Benue and left for a destination where only he could tell. No one has seen him in Benue since that day”.

Days after, spokespersons of Ortom and Idris nearly engaged themselves in a fistfight on national television.

It’s been weeks and months now. And to think that Buhari is just learning of all that transpired.

“I’m not aware that the I-G did not spend 24 hours in the State as directed by me, I am getting to know in this meeting,” Buhari said as he showed up at a gathering of farmers, herdsmen, government officials, senators and members of the House of Representatives in Benue.

play Buhari in a meeting with Benue stakeholders

Which begs the questions: as Commander-in-Chief, doesn’t the president receive regular security or intelligence briefings from his service chiefs? How come the president didn’t know that IGP Idris only spent one day in Benue—epicenter of the crisis—before hopping off to Nasarawa, which is across the border from Benue?

If he wasn’t briefed, didn’t the president read media reports of all that transpired?

Security should be Buhari’s strongest suit and forte as a former Army General. However, not knowing what his police boss has been up to, speaks of a lacuna in the nation’s security architecture and a dereliction of duty between IGP Idris and the nation’s C-in-C.

What other security lapses have the other service chiefs been getting away with? Who is keeping tabs on the ‘boys’? Who monitors what they are doing out there on the field? Who commands the commanders?