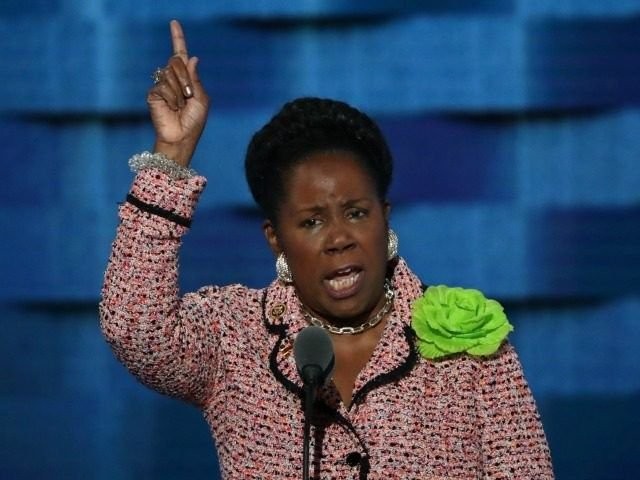 A teacher in Washington D.C., Jean-Marie Simon, recently accused United Airlines of giving her first clas seat to US Congresswoman. Sheila Jackson Lee. United Airlines admitted upgrading the congresswoman to first class, but claimed that Simon had canceled the last leg of her flight from Houston to D.C. Read here.

Now the congresswoman has reacted to the story, following several backlash from her constituents and other American citizens.

She accused the passenger, Jean-Marie Simon of being racist, adding that Simon’s complaints were because she (Jackson Lee) is black.

After more backlash, she ‘kinda’ apologized to Simon for taking her seat.

However, a congressman has claimed that Sheila Jackson Lee is known for constantly being upgraded to first class when she travels, despite paying for Economy seat. She is also known for race baiting. 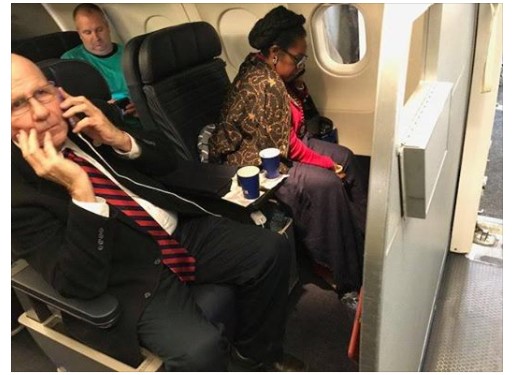 Read her tweets below: 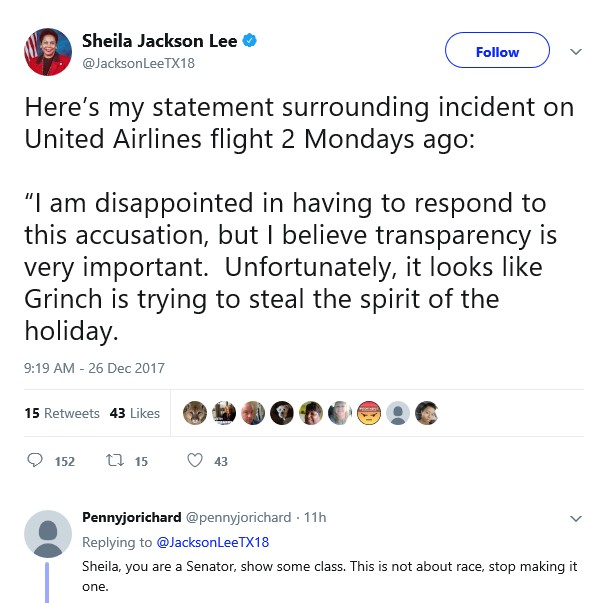 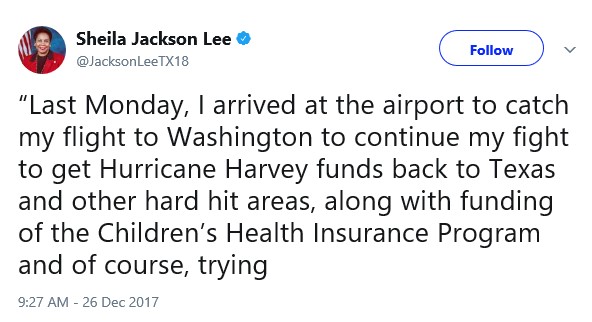 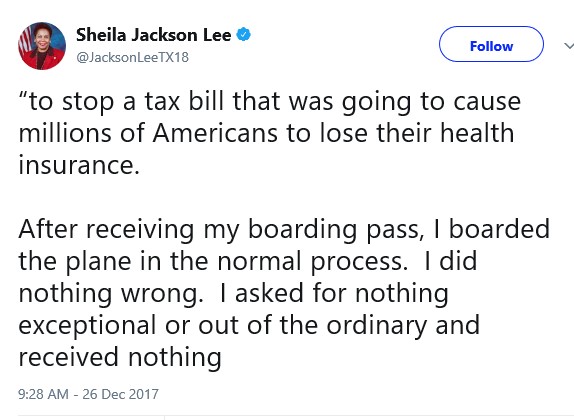 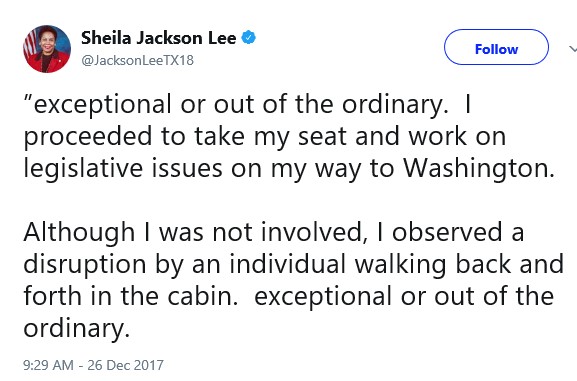 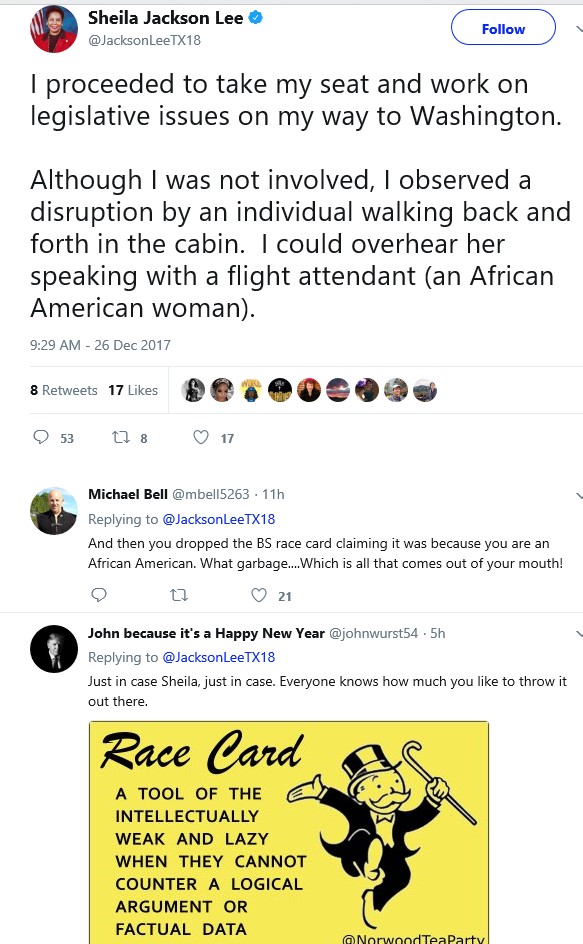 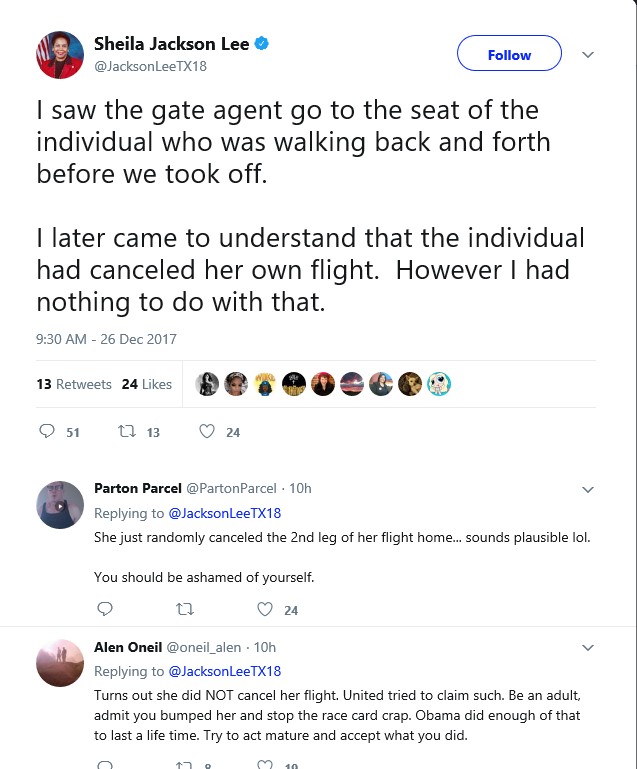 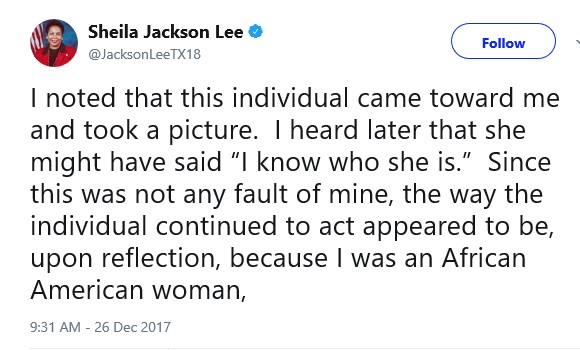 Read the rest of her tweets from bottom to top… 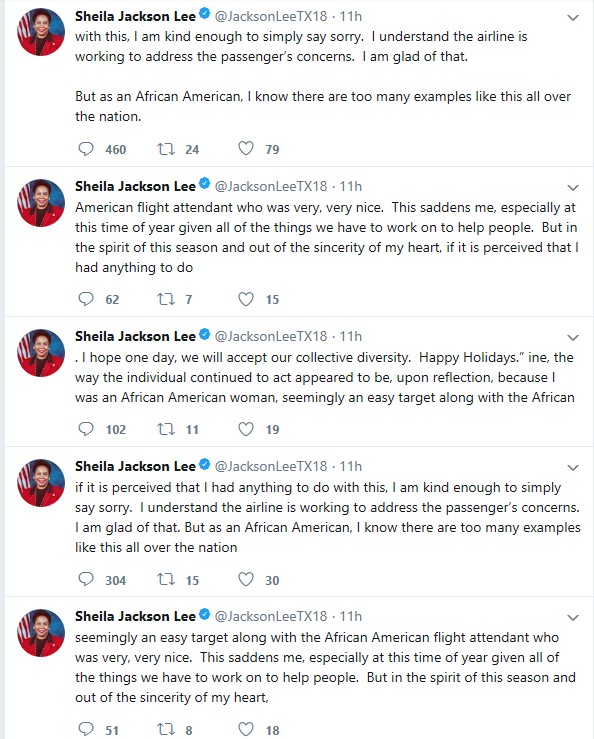 Pope Francis is Right on The Lord’s Prayer By Reno Omokri
Union urges IGP to probe shooting of students in Ibadan
Goldfrapp- Anymore (@goldfrapp)
How men should dress for a black tie
Lady Gaga puts on very sexy display as she arrives for World Series game in LA (Photos)
I watched several videos of Quadri, says Japanese star
Woman in court for alleged stealing fraud
Photos/Video: Mother of two sentenced to 6 months in prison for insulting Prophet Muhammad
16yr old girl remanded in prison for stabbing 20yr old lover to death
Marcus Rashford inspired by Brazil legend Ronaldo
In Poland Pole dies after setting himself on fire in protest Passers-by tried to put out the flames with fire extinguishers, but the man was rushed to hospital in a serious condition
Simon Cowell rushed to the hospital after fainting at home
Kevin Spacey ‘House of Cards’ actor comes out as gay, apologizes after misconduct accusation Kevin Spacey came out as gay early Monday and apologized to actor Anthony Rapp, who accused the Hollywood star of making a sexual advance on him at a 1986 party.
Yemi Alade – Go Down + Black Magic (Album) Out Now
Kim Kardashian and Kanye West Enjoy Date Night Before Baby No. 3’s Arrival