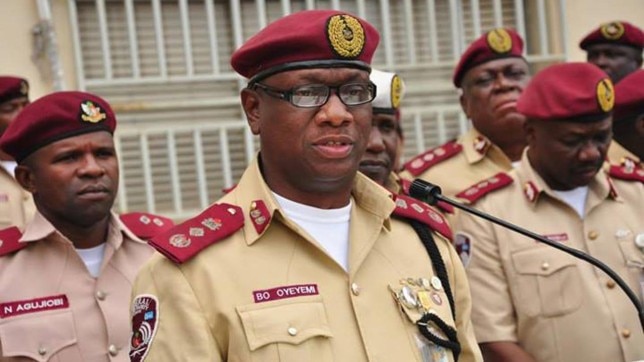 Oyeyemi said his leadership will not tolerate any form of indiscipline among officers of the Corps.

The Federal Road Safety Commission (FRSC), Mr Boboye Oyeyemi has sacked 25 officials after various corruption allegations were established against them.

The Corps Marshal Mr Boboye Oyeyemi, disclosed this on Thursday, November 30, in Ibadan, adding that there is a massive self-cleansing ongoing to rid the corps of corrupt officials.

The FRSC boss stated this when he was was fielding questions from reporters at the 2017 Press Week of the Nigeria Union of Journalists (NUJ), Oyo State Council.

He delivered a lecture, entitled, “Road Safety in Nigeria: Challenges and Prospects” at the event.

Oyeyemi said his leadership will not tolerate any form of indiscipline among officers of the Corps.

He pleaded for the cooperation of members of the public in achieving the goal.

He said, “Just on Wednesday, I sacked 25 officers over corruption-related offences and  I will still sack more.

“No corrupt officer has any business being in the Corps as the Federal Government has done everything within its power to make us comfortable.

“I will plead for the cooperation of members of the public to give information on corrupt officers and be ready to establish their allegations when they are called upon to testify against the erring officials”.

While speaking on efforts to reduce road accidents across the country, Oyeyemi said he had instructed his men to impound road unworthy vehicles during the Yuletide

He called for harmonisation of traffic laws in the federal, state and local government levels, to provide effective legal framework in addressing abuses on the road.

On the delay driver’s licence applicants face in obtaining the document, he said the problem is not from the Corps.

He said the delay came from the states after they were delivered to them for distribution.

Oyeyemi, however, said the FRSC is proposing special distribution centres across the country where applicants would go to collect their permanent drivers licenses.

Nine dead, many injured in accidents