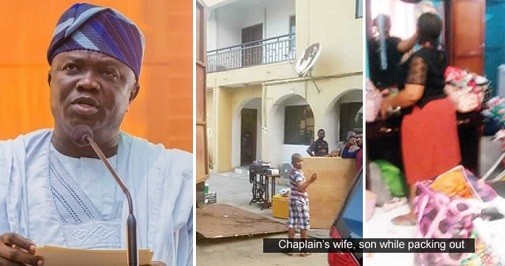 In the wake of a PUNCH’s report on the sacking of the presiding Chaplain of Chapel of Christ the Light, Alausa, Lagos State, allegedly on the order of Governor Akinwunmi Ambode, many Nigerians have sided with the priest, Venerable Femi Taiwo, while lambasting the wife of the governor for what they described as her haughtiness and overbearing influence. They also lampooned the government for ordering the priest to vacate his official residence within 24 hours.

The PUNCH, on Friday, had reported that Taiwo was sacked a day after the wife of the governor, Bolanle Ambode, stormed out of the church during an anointing service. Mrs. Ambode was said to have been unhappy that the priest did not accord her due recognition by anointing her before the other congregants.

Members of the church were said to have filed out to receive anointing oil during the service without any preference given to Bolanle, who reportedly waited endlessly with her entourage.

By Friday afternoon, the PUNCH’s story had attracted up to 370 comments on our website, 400 comments and 600 shares on Facebook and was the most talked about story in several places within the major cities in the country. Most of the comments expressed shock that the wife of the governor could take such an action.

On The PUNCH website as well, almost all the entire comments under the story were against the governor and Mrs. Ambode.

A Facebook commenter, Solape Lawal-solarin, said, “The shameful dance of the fool who thinks (s)he is a jewel. God sees everyone as equal. The only thing that sets you apart is his discretion in giving grace.

“So, because you are the First Lady of Lagos State and your husband has suddenly got carried away because of the strides he has made in his first two years in the state, showing or flaunting the office is the in-thing. You have forgotten you are from the earth irrespective of your status.”

Another commenter, Kuma Julius, said, “If she couldn’t wait for her turn because she is the governor’s wife, she should have just bought an olive oil and do the anointing service in her house or office.”

A reader, Balogun Omotunde, described Taiwo’s sacking as the “height of impunity.”

“Imagine Steve Ayorinde trying to justify the chaplain’s sacking in a way that will suit his boss. Next time, Ambode will attempt to sack God. Arrant nonsense, absolute power corrupts absolutely,” he said.

On Thursday, the Commissioner for Information and Strategy, Steve Ayorinde, had explained that Taiwo was sacked for past infractions.

According to him, the chaplain had been queried a number of times for “conduct unbecoming of his office.”

“The culmination of various indiscretions led to the Governing Council of the church issuing yet another query that led to his being relieved of his post. This has got nothing to do with the First Lady.”

But the explanation has not stopped the torrent of lambasting comments, like the one from Babatunde Adebowale Oyewole, who wrote, “This is total rubbish! Is Bolanle Ambode not equal with others before God? This is shameful! They are looking for God’s wrath if the Pastor is not recalled.”

Another reader, Darkmanx Steve, wrote, “You are bigger than the church and God’s servant because of your position as ‘governor’s wife’. You fail to realise that after death all of us would be equal and would only be separated by judgement.

“Your judgement to the poor servant of God ends in throwing him out to render him and his family homeless and frustrated.”

“Sacking someone because your wife was not attended to first. On the next election day, Ambode and his wife will join the queue and refuse to vote first, pretending they are humble and always ready to take their turn,” another commenter said.

A Facebook commenter, Patrick Perembowei Barnabas, was equally critical of the governor’s wife.

“Keep your self-esteem at home while coming to church because in the church, nobody should be worshipped except God. Good Nigerians believe in first come, first serve. We don’t have first Lady in the church,” he wrote.

“Let Ambode defend this to Nigerians if he is really a nice man. Nigerians have suffered too much in the hands of their leaders,” another reader said.

Meanwhile, Saturday PUNCH learnt on Friday that Taiwo has now settled into a new and fully furnished accommodation provided by members of his congregation.

Taiwo told one of our correspondents that he got five offers of apartment from different members of the African church congregation.

A source within the church told our correspondents that church members who were miffed by the way the priest was treated came together to help him and his family.

“Apart from the apartment he moved to, he got four offers of apartment from different members of the African church congregation,” the source said.