Why Republicans and Democrats are fighting a U.S. presidential election campaign battle in Canada 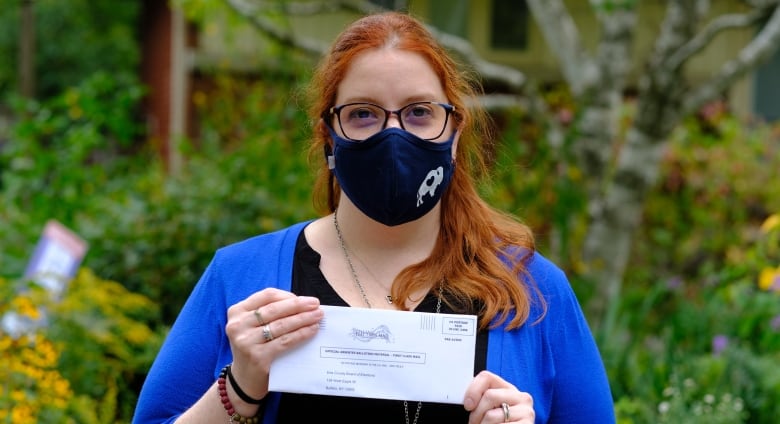 The U.S. election is being fought on Canadian soil, too.

Both the Republicans and Democrats are pushing for a share of the 620,000 Americans living in Canada who are eligible to vote in the Nov. 3 presidential election.

With tight races in battleground states like Michigan and Florida, where some of the latest polls have Joe Biden and Donald Trump neck and neck only a few weeks before the election, both parties hope that votes coming from Canada will make the difference in this election.

“We can’t sit back anymore,” says Heather Peterson, 37, as she plants a sign on a front lawn in St. Catharines, Ont., that reads “Americans can vote from Canada.”

Peterson was born in Buffalo and votes in New York state, but lives as a landed immigrant in St. Catharines. Three months ago, she helped start a brand new Niagara chapter of a group called Democrats Abroad Canada.

Peterson’s goal is to motivate as many Americans on the Canadian side of the border as she can to vote for Joe Biden.

“What’s on the ballot for me this time around is voting for women’s rights, Black rights, gay rights,” Peterson said.

“I am just seeing this dark cloud over everything. I wish there was something brighter in the world again.”

When asked what another four years of the Trump presidency would mean to her, Peterson can’t hold back her tears.

“I don’t want to think about it,” she said. “I am so broken that I can’t. I just have a fear that if it continues down this path, that we won’t be able to undo it anymore.”

Peterson admits she won’t say Donald Trump’s name out loud, because she dislikes the president so much. “His name infuriates me,” she says.

“American democracy is on the ballot this time around,” said Steve Nardi from his backyard in Mississauga, Ont.

Nardi is the chair of Democrats Abroad Canada. And while he doesn’t support Donald Trump in any way, he says the president has done wonders for the growth of his organization.

Nardi says his membership has grown by 73 per cent over the past four years, with 35 per cent of that occurring in the past seven months. The increase in membership has been so strong that in the past two years Democrats Abroad Canada hasn’t just opened the new chapter in Ontario’s Niagara region, there are also new ones in Windsor, Ont., and in the Atlantic provinces.

“People are angry, people want to make a change,” he said. “And they are finally beginning to hear the message that they are eligible to vote, even if they live outside the U.S.”

While there are roughly 620,000 Americans who are eligible to vote from Canada, most of them don’t. Four years ago fewer than 33,000 cast ballots.

He has 400 volunteers working to get out the vote — 150 of them are making calls to reach potential U.S. voters across Canada.

“My life is head-down, focus on this game,” Nardi said.

“On the morning of Nov. 4, my team and I need to wake up and know that we have put everything in the tank on the table, into the game. No ‘would’ve, could’ve, should’ve.'”

One state Nardi and the Democrats are targeting is Michigan — where he himself votes.

Trump won the state by only 10,704 votes in 2016, and Nardi insists at least that many Democrat Michiganders live in Canadian border cities like Windsor. That’s why Democrats Abroad have run ads in local media and on buses.

“I strongly believe the Michigan vote is there,” Nardi said.

There’s another reason Nardi is so committed to winning this election — it’s become personal for him.

As the only Democrat in his family, he admits that the past four years have been taxing.

“I called my father three days after the election [in 2016],” Nardi remembers.

“It was veterans day in the U.S. He’s a Silver Star medalist, so I called him to thank him for his service, and he gloated. It was the heartiest laugh that I had heard in 20 years from him. And all I said was, ‘what concerns me is the unbottling of hate that this man [Trump] seemed to have uncorked.’ And he yelled at me for 20 minutes. That broke my heart.”

Nardi says he and his father have come to a truce.

“Politics is a third rail,” he said. “We stay away from that, but if he puts on Fox News, things go downhill.”

With only a few weeks until the election, Nardi says he is cautiously optimistic that he’ll get the win he wants so badly.

Ask the chair of Republicans overseas, Toronto lawyer Mark Feigenbaum, who he’ll vote for in 2020 and he just laughs.

“Well, that’s a secret ballot,” he says. “I vote in California — I’ll leave it to you to figure out who I voted for.”

While California has tilted to the Democrats in every election since 1992, Feigenbaum still makes a point to cast his ballot.

Feigenbaum is a tax lawyer and has been involved with Republicans Overseas since 2000. He’s aware that his organization isn’t doing as much in Canada to get out the vote as the Democrats — but he’s not worried.

“The Democrats are really motivated because they have a fear that people aren’t going to vote,” Feigenbaum said.

“They are coming up from behind at this point and trying to win this election — and so you ask me why are they so active? Well, that in itself is an admission that they have a lot of work to do to win this thing.”

Feigenbaum says he hopes all Americans who are eligible to cast ballots from Canada will vote, but he isn’t convinced that Democrats Abroad Canada can make a difference in battleground states like Michigan.

“I think they are trying, but there are so many Republicans everywhere that are gonna vote, that want the current government, that as much as they [the Democrats] try they are going to fall short,” he said.

‘The most important election of my lifetime’

Not every Republican voting from Canada is as confident.

Georganne Burke introduces herself as an “unabashed supporter of Donald Trump.” She says it worries her that the Republicans are less active in Canada.

Burke has been a political operative in the United States and Canada for years, and she is the senior vice-president of a government relations company called The Pathway Group. However, for the next few weeks she will be campaign manager for Julius Tiangson, the Canadian Conservative candidate in the Oct. 26 federal by-election in the riding of York Centre. It’s fair to say that elections are in her blood.

“I believe that the vote, and the actual ballot itself, is a sacred thing,” she said.

“I can’t express enough how important and sacred and what a duty it is to vote in an appropriate and ethical way. I haven’t missed a single election in the U.S. in all the years I have lived in Canada,” Burke added.

“It matters a lot to me to continue to vote. I am very devoted to voting and I will do it until my last breath.”

Burke casts her ballot in the swing state of Florida where Trump won in 2016 by a little more than 100,000 votes. She knows it will likely be just as close this time around.

“Maybe he will win by one vote, and maybe that one vote will be mine.

“This election is so crucial to what the heart of the U.S. is and what it stands for,” she added. “I am worried, and I am not even sure the election is going to fix the problem. This is, without question, the single most important election of my lifetime.”

That sentiment seems to be shared by both Republicans and Democrats on this side of the border in the run-up to Nov. 3.