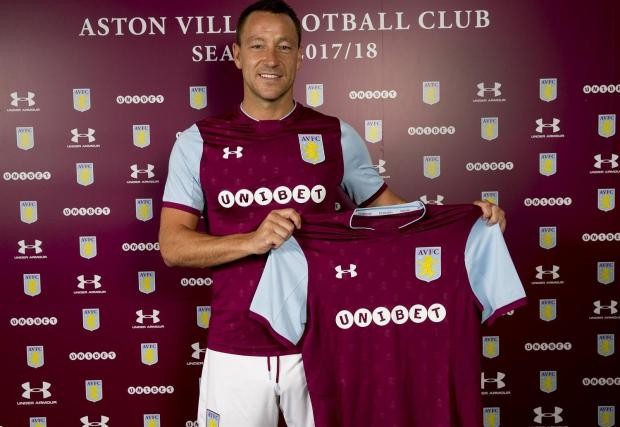 Former Chelsea captain John Terry has embarked on a final challenge by signing a one-year contract with Championship side, Aston Villa, at the age of 36.

In the age of huge-money moves to football’s new world, Terry’s career choice represents a throwback to a time when players dropped down a division to draw a final paycheck.

But where most went in search of an easier life, Terry said his decision did not indicate a softening in his footballing ambitions.

The winner of five English Premier League titles said it was more about ensuring he avoided playing against the club for whom he appeared more than 700 times.

“The mental side of playing against Chelsea was too much to kind of get over for me,” Terry said at his unveiling at Villa Park.

“It was 22 years and I am very proud of that, I wish Chelsea well next season. But now my thoughts are 100 per cent here (at Aston Villa). I am delighted to be here as a player.

“It is obviously a huge club. I had a few conversations with (manager) Steve (Bruce) over the summer. I am very hungry to still play at the top with a club and a manager who still has the same ambition as me.

“I am ready to play and give it everything this year. I am here, I am ready to fight for the Villa shirt and for this football club.’’

It is a deal Bruce predicted would be “worth every penny” if it kickstarts a promotion challenge for the club who were relegated in 2016 and finished a disappointing 13th last season.

“He is worth every penny because we know what he brings,” Bruce said. “It is not often that you get a natural leader of men these days.

“I have watched him from afar for a long, long time, and to get him here is a great coup for all of us.”

“We made him a good offer. I would be a hypocrite if I said he was not a top player. Aston Villa have signed a top player,” he said.

Terry will wear the No. 26 shirt, the same as he did at Chelsea, and is tipped to become the club’s captain.

He is expected to fly to the club’s pre-season camp in the Algarve ahead of their season opener against Hull City, Bruce’s former club, on Aug. 5.

By a strange symmetry, he would have spent his entire career at clubs who have won the European Cup.

Aston Villa won the Cup in 1982, while Chelsea claimed the trophy, recast as the Champions League, in 2012.