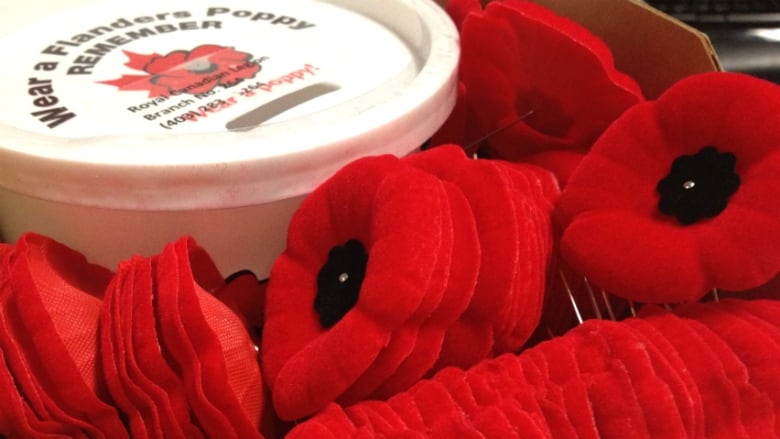 Less than a week before millions of Canadians are set to pay their respects to veterans by wearing a poppy, a national grocery store chain has banned its employees from wearing the symbol of remembrance while on the job.

But the company won’t say why.

An employee of the Whole Foods in Ottawa says she was told by a supervisor that wearing the poppy would be seen as “supporting a cause.”

“I was basically told … if they allowed this one particular cause, then it would open up the door so that they would have to allow or consider allowing other causes,” said the employee. CBC News has agreed not to name her as she is concerned about reprisals at her job.

“I was in shock actually. I was appalled. I couldn’t believe it.”

She said in the past few years, she’s been able to wear a poppy — a symbol of remembrance that hearkens back to the First World War — while on the job. But this year was different.

The Whole Foods uniform consists of an apron, coat or vest, a hat and name badge.

A poppy does not comply with that policy, the company confirmed, but did not provide a reason why.

The first poppies were distributed in Canada in 1921. The donations they bring in are an important source of revenue for the Royal Canadian Legion that goes toward helping ex-servicemen and women buy food, and obtain shelter and medical attention.

But legion branches across Canada have been struggling from loss of revenue due to the pandemic and some have expressed fears this year’s poppy campaign will bring in significantly fewer donations.

“We are thankful for the many partners and retailers like Whole Foods who contribute in various ways to the National Poppy Campaign,” said Danny Martin, director of corporate services at the legion’s national headquarters, in a statement.

“While retailers must set their own corporate policies, unless there are safety concerns we do encourage wearing poppies at all times as a show of respect for our Fallen, and as a symbol that helps educate Canadians about the sacrifices of our Veterans.”

Wearing a poppy could be considered a display of a political belief, according to employment lawyer Alex Lucifero with the firm Samfiru Tumarkin, and thus, would not be protected under the Human Rights Code in Ontario.

However, human rights codes in other provinces may be different, he says.

But, he added, it is “generally speaking, not good PR for an employer to take a position like this.”

Whole Foods, which is owned by Amazon, says it is supporting the legion by donating more than $8,000 to the poppy campaign. It also said employees at each of its stores will observe the traditional moment of silence at 11 a.m. on Nov. 11.

“We’re talking about people who have sacrificed their lives and families, people who have lost you know, husbands, wives, mothers, fathers, sons, daughters … People have died for our country to keep it safe and to keep it free and this is the one time of year we get to honour them and say ‘Thank you. Thank you for everything you have done,'” she said.