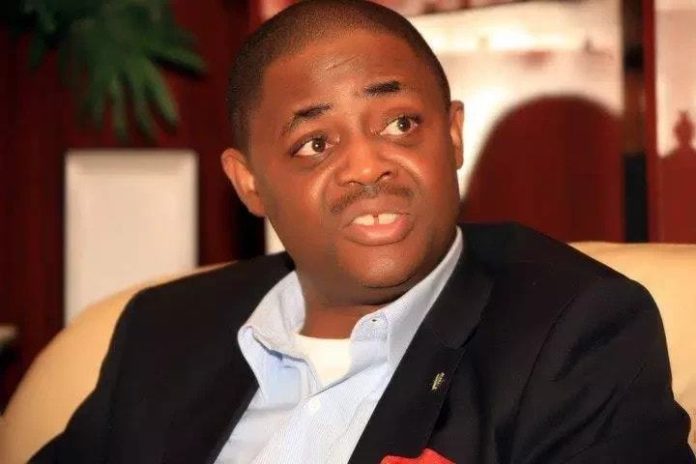 DAILY POST reports that the men of the Nigeria Police Force stormed Senator Melaye’s Abuja residence on Friday to arrest him, but Melaye posted on Twitter that he was not at home.

The Senator said he will report to the police this week.

The police, however, on Sunday said Melaye is around and vowed to remain at his residence until he surrenders.

But reacting, Fani-Kayode took to his Twitter page to condemn President Buhari for what he termed ‘vicious persecution’ of Senator Melaye, Dasuki and other Nigerians.

According to him, Buhari will pay a price for the alleged persecution.

Fani-Kayode wrote: “Buhari will suffer for the vicious persecution that he has meted out to the opposition over the last 3 years.

“He will also pay a heavy price for the evil he has subjected Adeyanju Deji, Dino Melaye,Sambo Dasuki,Ibrahim El Zak Zaky and others to.

“We will never forgive or forget.”

Meanwhile, the Senate President, Dr. Bukola Saraki has urged President Muhammadu Buhari to direct the release of social critic, Mr. Deji Adeyanju and ensure that his fundamental human rights are not continuously abused by the Police.

Saraki, in a statement signed by his Special Adviser (Media and Publicity), Yusuph Olaniyonu, said Adeyanju’s case was portraying the present administration in bad light as a government that was intolerant of criticism and suppressing views of the opposition.

He stated that a situation where Adeyanju was re-arrested after being given bail by a court indicated a deliberate attempt to put him out of circulation.