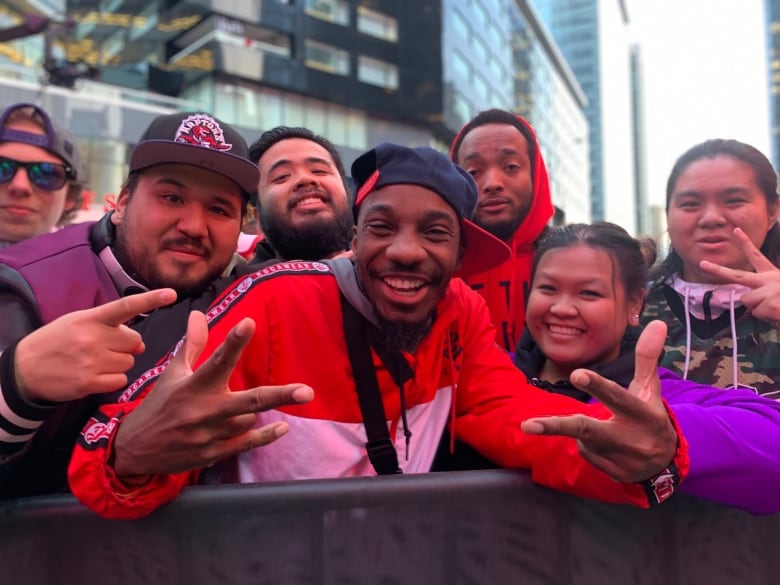 Fans cheer on the Toronto Raptors as they play the Philadelphia 76ers in Game 7 of the NBA Eastern Conference semifinals in Toronto on May 12. That game was one of a few rare moments of joy for Raptors fans in “Jurassic Park.” (Tijana Martin/The Canadian Press)

TORONTO — The amount of heartbreaking moments for Toronto sports fans who gather inside the concrete jungle referred to as both Maple Leaf Square and Jurassic Park is starting to add up.

Though, in many ways, being in the square for a Toronto sports team playoff loss is a rite of passage.

It’s been a place for minimal celebration — an epicentre of pain for fans of the city’s basketball and hockey teams.

Inside the fenced-off area, there is a tidal wave of emotions. Despair and shock in most moments and limited euphoria in others.

Kawhi Leonard’s bounce-around-the-rim buzzer beater to send the Raptors into the Eastern Conference finals is undoubtedly the greatest moment for fans in the square since they’ve been gathering there.

Kawhi Leonard poured in 41 points, including a dramatic game-winner as the Toronto Raptors beat the Philadelphia 76ers 92-90 to advance to the Eastern Conference Finals. 1:23

Since 2013, fans of Leafs and Raptors have been coming together out front of the arena to cheer and chant and collectively support their teams during their playoff runs.

They begin each game with an abundance of hope and optimism, that perhaps maybe this time is going to be different — that this time it might just end in a championship.

Then the games start and the harsh reality of being a sports fan in Toronto sets in. Take for instance the first time fans started to gather in the square. April 2013, Maple Leafs fans decked in blue and white braced themselves for a playoff battle with Boston.

An epic third period meltdown, up 4-1 in the third period, only to lose in overtime. The fans in the square were devastated. That was, perhaps fittingly, how fans gathering in that space all began.

And remember how Raptors fans’ adventures at Jurassic Park started? That came in 2014 when Masai Ujiri was so overwhelmed by emotion during the game one rally against Brooklyn he dropped an expletive over the loud speakers that sent the crowd into a frenzy.

It also resulted in Ujiri being fined. And the series ended in more heartbreak. Yet another Game 7 defeat for a Toronto sports team, this time at the hands of Brooklyn.

There have been flickers of fun and winning though, too. Mostly thanks in large part to the Raptors.

Lifelong fan Tivon James has gathered in the square with his “squad” too many times to count over the last number of Raps’ playoff runs. He says there’s nothing quite like the energy of the fans when the team gets rolling in a game. 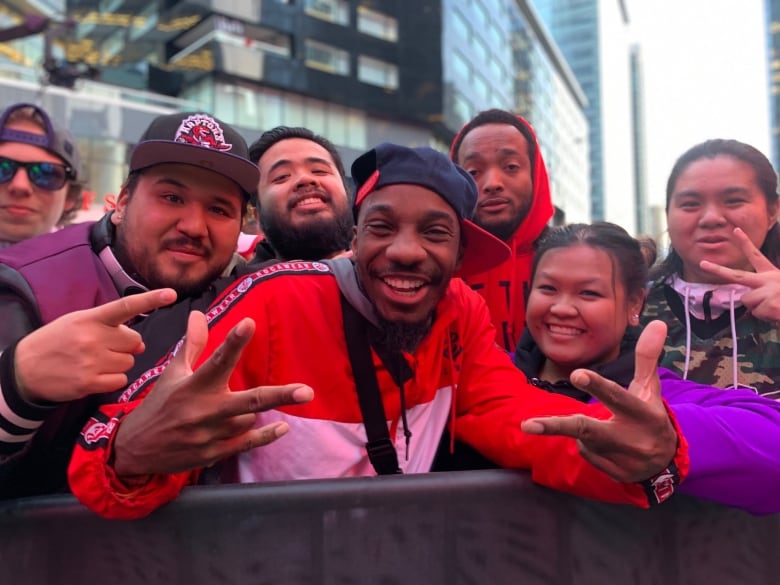 Tivon James, centre, and his squad were on hand for Game 2 against Milwaukee on Friday.

“I was speechless the first time I came here. It felt like everyone was a family,” James said. “Honestly, I love everyone here. The energy. The vibe. And I get to watch the game on this massive screen.”

James was in the square Friday night for Game 2 of the Eastern Conference finals, deflated by the team’s lacklustre effort against the Milwaukee Bucks to fall behind in the series 2-0.

Giannis Antetokounmpo had 30 points and 17 boards in the Milwaukee Bucks 125-103 rout of the Toronto Raptors. The Bucks now lead the Eastern Conference Final 2-0. 2:01

He isn’t losing hope in this team’s ability to get back in the series and even win it.

“I have faith in them. They just have to get out of their minds,” James said.

He’ll be back for every game the Raptors play this season because James says there’s nothing quite like being surrounded by the crowd.

For as many times as Toronto sports fans have left the square dejected, they’ll keep coming back. It’s just what they do.

And it’s what Lara Gerhardt and Sarah Lennox plan on doing for Sunday’s Game 3.

They made their first-ever trip to Jurassic Park on Friday to watch the Bucks thump the Raptors. 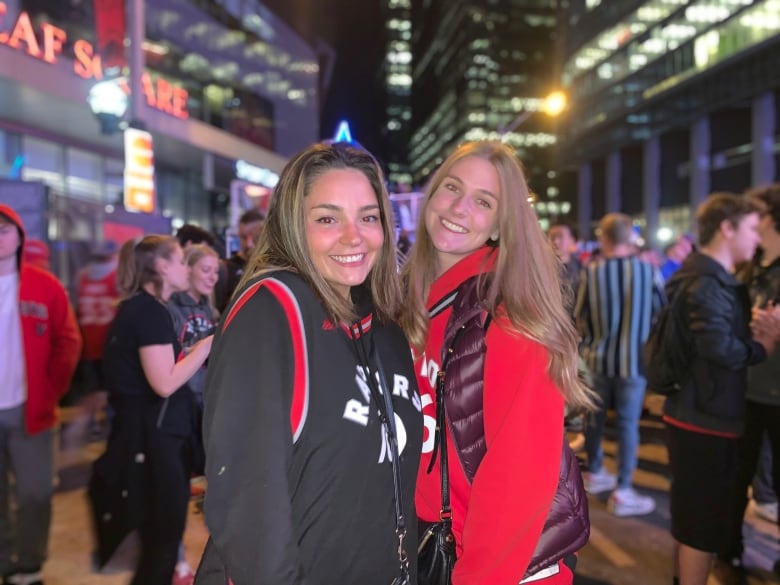 Lara Gerhardt, left, and Sarah Lennox, right, say they will be back at Jurassic Park to support their team on Sunday night.

“I wanted to experience Jurassic Park and I love Kawhi,” Gerhardt said. “This is amazing.”

By halftime, many fans had headed for the exits, unimpressed by their Raptors’ performance. Gerhardt stayed until the bitter end.

“We’re coming back on Sunday to experience them winning,” she said. “It’ll be better the next time.”

Always next time. It’s what keeps them coming back. The optimistic bunch never stop believing spring after spring.

“We need some positivity. That’s what it means to be a Raptors fan. We have to support until the end,” Lennox said.

Share
Facebook
Twitter
WhatsApp
Pinterest
Linkedin
ReddIt
Email
Print
Tumblr
Telegram
Mix
VK
Digg
LINE
Viber
Naver
Previous articleHave you jumped on the bidet bandwagon yet? You should
Next articleYes, cultural appropriation can happen within the Indigenous community and yes, we should be debating it