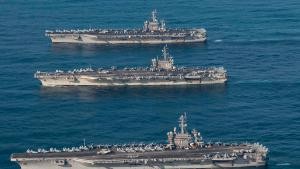 Three US Navy aircraft carriers put on show of strength in the Western Pacific Ocean over the weekend, the first time three of the 100,000-ton behemoths have sailed together in a decade.

The USS Ronald Reagan, USS Theodore Roosevelt and USS Nimitz and their multi-ship strike groups are participating in the four days of exercises, which are expected to end Tuesday. 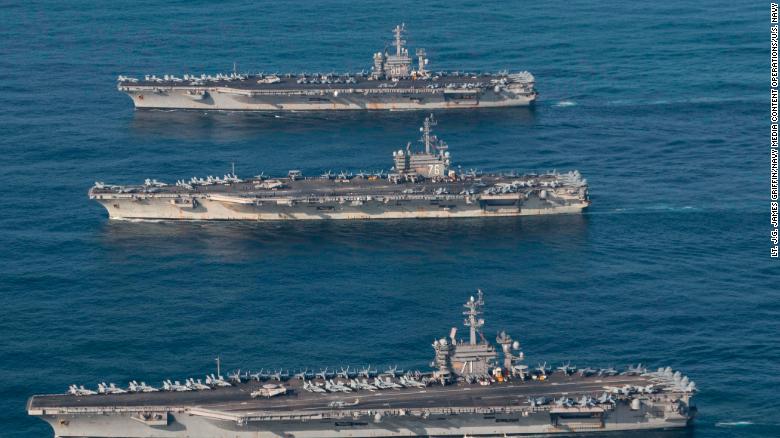 The aircraft carriers USS Ronald Reagan (CVN 76), USS Theodore Roosevelt (CVN 71) and USS Nimitz (CVN 68) and their strike groups conducti operations in the Pacific.
“Multiple carrier strike force operations are very complex, and this exercise in the Western Pacific is a strong testament to the US Pacific Fleet’s unique ability and ironclad commitment to the continued security and stability of the region,” Adm. Scott Swift, the commander of the US Pacific Fleet, said in a statement.
A South Korean Defense Ministry official said the three US carriers held drills on either side of the waters separating the Korean Peninsula and Japan. Exercises closest to the Korean coast involved US and South Korean ships, while those closest to Japan involved US and Japanese ships, the official said.
The presence of the three-carrier flotilla in Pacific waters is seen as a signal to North Korea that the US will not be intimidated by Pyongyang’s continued testing of nuclear weapons and ballistic missiles. 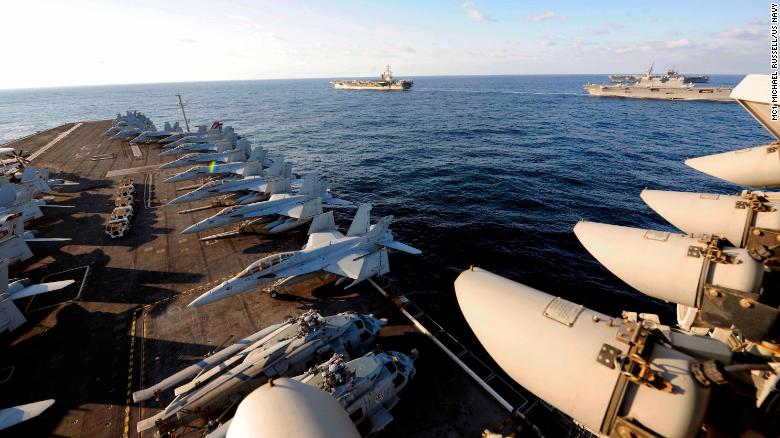 Three US carriers have not operated together in the Pacific in a decade.
“We sent three of the largest aircraft carriers in the world (to the Korean Peninsula) and a nuclear submarine is also positioned,” US President Donald Trump said after his arrival in South Korea last week.
During his trip, Trump struck a tough tone on North Korea, calling for an end to its nuclear program and saying “we hope to God we never have to use” the military strength the US has on the Korean Peninsula. 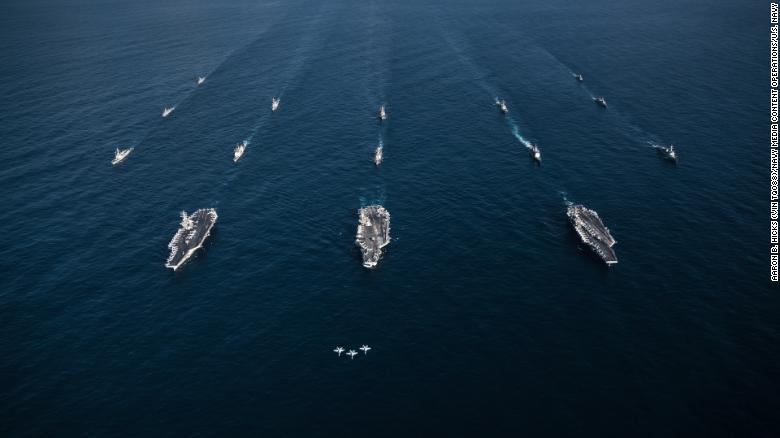 Three F/A-18E Super Hornets lead a flotilla of US and South Korea ships in exercises on Sunday.
But Pyongyang has seen any US military exercises as a threat and the presence of the three carriers has been received no differently.
The state-run Korean Central News Agency said Saturday that the presence of the three carriers was part of Washington’s “sinister intention to maintain military hegemony in the region.” 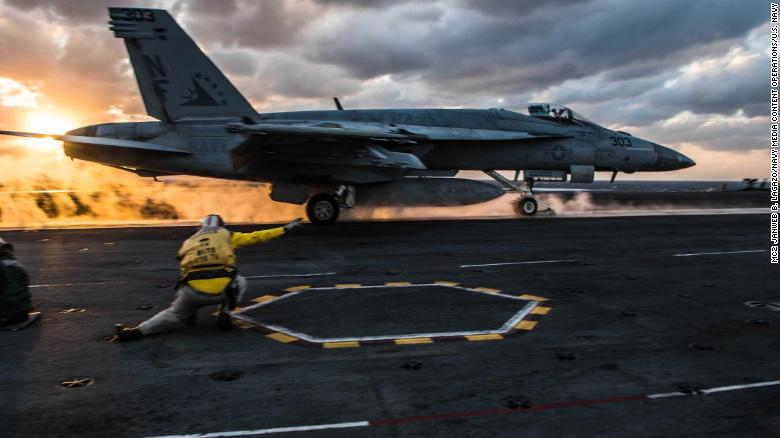 An F/A-18E Super Hornet launches from the flight deck of the aircraft carrier USS Ronald Reagan.
KCNA also cited other recent US military moves, such as the first deployment of stealthy US Air Force F-35 fighters to Okinawa, as signs Washington is ramping up for war against North Korea.
Pyongyang also accused the US and its allies, including Japan, of trying to “escalate the military tension and increase arms race in the region with each passing day.” 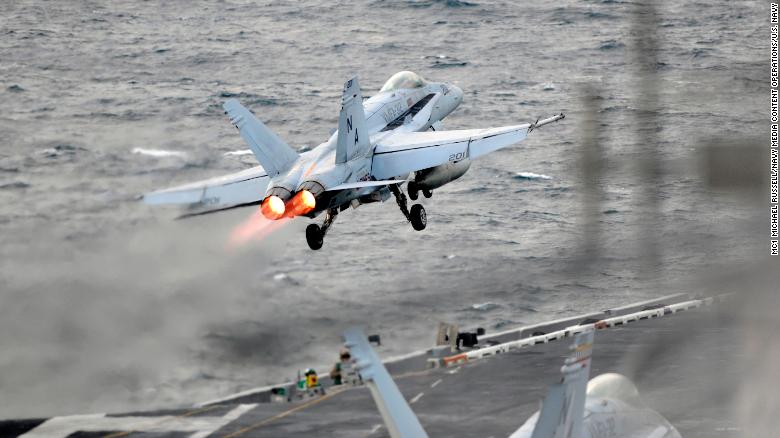 An F/A-18E Super Hornet launches from the flight deck of the aircraft carrier USS Theodore Roosevelt.
North Korean government officials told CNN’s Will Ripley in Pyongyang last week that the US was increasingly taking action that could “ignite another Korean War.”
“Nobody knows when and how the ‘war maniac’ Trump will ignite the ‘wick of war,'” the officials said, referring to the presence of the carriers near the peninsula. 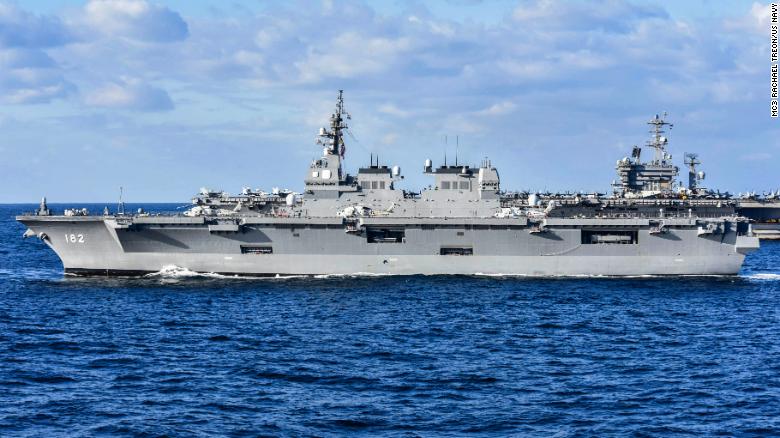 Japan’s Maritime Self-Defense Force helicopter destroyer JS Ise sails alongside the aircraft carrier USS Nimitz .
Joining the three US carriers and their strike groups were three Japanese Maritime Self-Defense Force warships including the helicopter destroyer JS Ise, a guided-missile destroyer and general purpose destroyer.
N Korea accuses US of practicing sneak attack 02:20
“The JMSDF is always using every opportunity to strengthen the JMSDF-USN alliance, and joining an exercise like this is a natural event to stabilize regional security,” a statement from the Maritime Self-Defense Force said.
South Korean vessels joined exercises with the US warships on Sunday, according to US Navy photos.
The South Korean Defense Ministry said it sent two destroyers equipped with the Aegis anti-ballistic missile defense system as well as five other warships to the exercises.
Each US aircraft carrier holds more than 60 aircraft, including F/A-18 fighter jets, airborne early warning and control aircraft and helicopters for anti-submarine warfare. 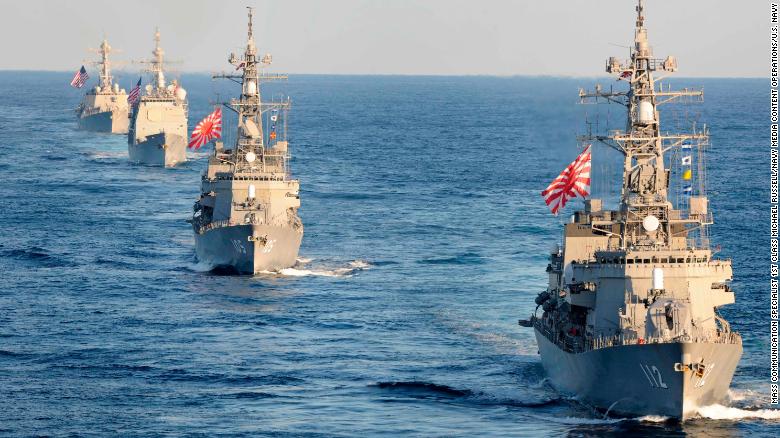