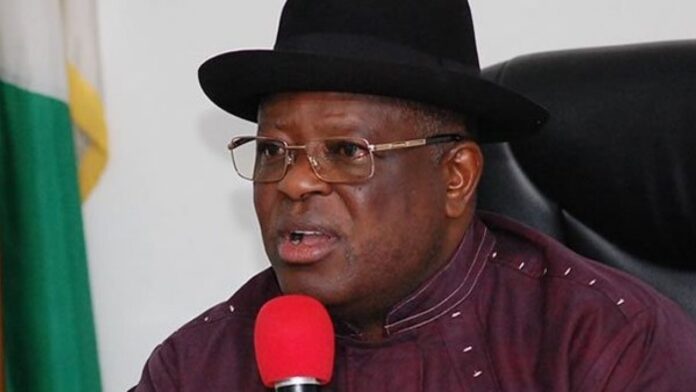 Ebonyi State Governor, Chief David Umahi on Thursday alleged fraud in wage bills in the state and thereby suspended the payment of pensions to pensioners, especially retired permanent secretaries, and directors among others.

Umahi made this known while addressing journalists shortly after the executive council meeting that took place at the New Government House, Centenary City, Abakaliki, the state capital.

The governor, who spoke through the Commissioner of Information and State Orientation, Mr. Uchenna Orji, expressed shock over a continued increase in the wage bills of the state.

He, however, ordered the immediate re-validation and re-verification of pensioners in Ebonyi State.

According to him: “EXCO received a memo on the re-validation and re-verification of Pensioners in Ebonyi State due to a continuous increase in wage bills. The office of the Head of Service had made discoveries of payments made to deceased pensioners in the State and this is one of the reasons for this verification exercise.

“EXCO approved the re-validation of all pensioners in the state beginning with the retired Permanent Secretaries and Directors in the State.

“EXCO also further approved that payment of pensions to these pensioners be suspended until the end of the exercise which will not exceed twenty (20) working days after which payments to all cleared retirees will be reinstated,” he stated.

Umahi also revealed the preparedness of his administration to establish a public complaint and anti-corruption commission serve as EFCC, to prevent all forms of fraud and corrupt practices in the state.

He said: “EXCO received a memo to establish a Public Complaints and Anti-Corruption Commission Law in the State from the Honourable Attorney-General and Commissioner for Justice. EXCO members were directed to study the draft law and make their contributions during the next EXCO Meeting.”

In a related development, the governor tasked a new commissioner, Prof. Humphrey Nwobasi to carry out a campaign against the use of fake fertilizer products in the state.