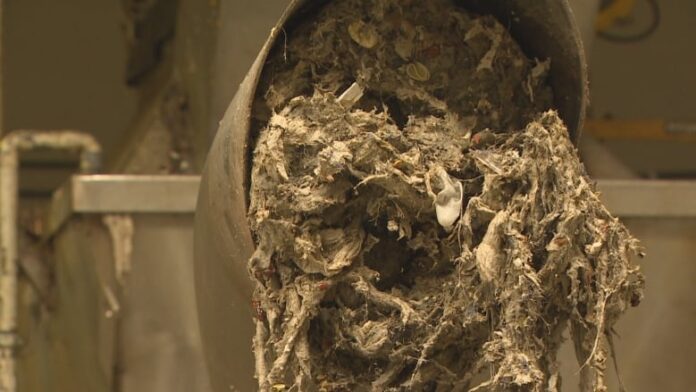 Waste from more than a million toilets flows out of giant sewage pipes, creating a swirling stinky river that has to be processed at the Annacis Island Wastewater Treatment Plant which serves a large section of Metro Vancouver.

It’s just one of many facilities across Canada and around the world seeing an uptick in discarded masks, gloves and wet wipes being flushed down the toilet and causing treatment problems since the advent of COVID-19.

“It looks like we saw a few masks going up,” said plant supervisor Dave Hoffman, as he pointed to a giant metal mechanical screen that separates items that don’t biodegrade from the usual sludgy mass of poop and toilet paper.

Personal protective equipment (PPE) and other items that don’t biodegrade are dried before ending up in a large waste pile nearby. At this point, they’re matted into a putrid, grey mass, but a few medical gloves and items such as condoms stand out.

It’s a problem that’s drawn the attention of researchers at the University of British Columbia who are at work on creating a protective mask that biodegrades or can be recycled.

He says there’s been an uptick in this type of waste since the outbreak of the pandemic, but it hasn’t been quantified.

This adds to the problem highlighted by the infamous fatbergs — wet wipes and kitchen fats clogging up sewage systems around the world after so-called “flushable wipes” surged in popularity.

COVID-19-related personal protective equipment (PPE) is adding to the problem, because even a small percentage of improperly disposed of items can clog pumps, pipes and other infrastructure.

Dobrovolny said colleagues across Canada who run sewer and solid waste systems are seeing a similar rise in improperly disposed of PPE, and taxpayers end up footing the bill.

“What we’re finding now with COVID is that those numbers are increasing. Across the country, it can total over $250 million a year in increased maintenance costs,” said Dobrovolny.

Masks made from plastic fibre

Metro Vancouver is putting new emphasis on an existing campaign to encourage people to be careful what they send into the sewer system. He reminds homeowners that they, too, can face personal costs if their home sewer system gets clogged.

Disposable masks, for instance, may feel like soft cotton, but they’re almost all made from non-biodegradable material such as polypropylene.

In addition to people flushing them down the toilet, cities are seeing personal protective equipment discarded on the street. A spokesperson for the city of Vancouver says that’s raising concerns for crews who have to deal with the waste.

Also, something dropped on the street can then get flushed into storm drains, many of which empty straight into streams or the ocean.

Richard Thompson, a professor of marine biology at the University of Plymouth in the United Kingdom, says society needs to understand and deal with what happens to all disposable items after they’re used.

“The persistence of litter is incredibly long-lasting — hundreds if not thousands of years — and that’s why it’s really important that that end-of-life phase is fully thought out,” he said.

And he notes that this new waste stream is adding to the already serious problem of microplastics, the tiny pieces of debris now found in every ocean.

“The sea is sort of downhill from everywhere, and so there’s a tendency for materials to accumulate there carried by rivers or carried by wind.”

At a research lab at the University of British Columbia, a group of scientists saw the problem and decided they could put a dent in the growing waste pile.

They recently formed an ad hoc team to come up with less-damaging mask.

“This is all paper — all wood fibre,” said Orlando Rojas, a professor at UBC’s Bioproducts Institute, pointing to an array of materials and mask prototypes on a workbench.

Canada has a long history of making paper products, and he’s confident once the right formula is found, millions of eco-friendly masks and other protective gear can be produced at low cost.

“People are very conscious about sustainability, so this flies really high in people’s minds. If we match that interest with the performance of wood fibre, we likely have a winner here,” Rojas said.

It would also help reduce dependency on foreign suppliers, a huge ongoing problem, as demand for PPE far exceeds supply.

The key is creating a soft, durable paper product that can still filter out viruses.

WATCH | PPEs create a waste problem, but Canadian scientists are working on a solution:

All those disposable gloves, masks and wipes that people are using to protect themselves against COVID-19 are creating a waste problem, but scientists are working on a made-in-Canada solution. 2:04

Rojas said many of the initial technical hurdles have already been solved, and talks are underway with manufacturers.

It could be a long-term proposition, with people all around the world now wearing face masks and concern growing over their impact on the environment.

A made-in Canada-solution, with the potential for local manufacturing would also help ensure the country isn’t caught short again when it comes to supplies of crucial equipment needed to fight the pandemic, said Rojas.