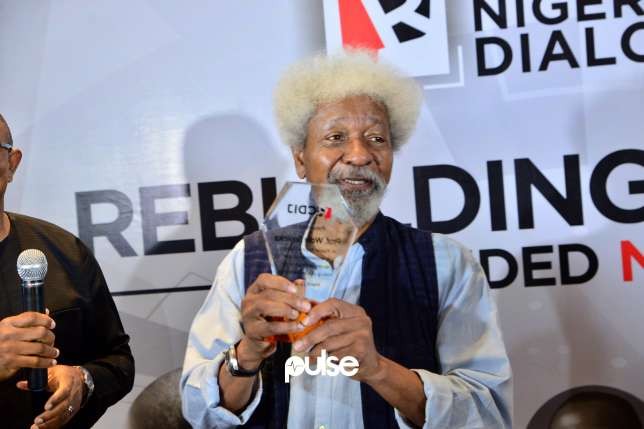 Speaking at a Ripples Nigeria dialogue session in Lagos with the theme: ‘Rebuilding trust in a divided Nigeria’, Soyinka said the Nigerian Twitter user is the reason US President Donald Trump called the country a ‘shithole country’.

“Just look at what goes on in Nigerian twitter. You are complaining that Donald Trump called you a shithole country. When I saw the danger that this man was going to become, the dangerous commodity he would turn out to be, I said I was going to tear my green card if he became president.

“And then what happened? Nigeria Twitter, all of you launched an avalanche of hate speech on me. Do I want to see you hanged? No. I want to see you shamed. If Trump calls you shithole, don’t complain. You have not earned the right to feel insulted.

“I actually want to see some of you hanged. All I do these days is laugh kwakwakwa”

Soyinka also said the national assembly would be wrong if it puts forward a hate speech bill for the president’s assent.

Pundits believe that the bill is targeted at Nigeria’s growing army of keypad warriors.

“Nobody will dare hang anyone for hate speech. They just want to silence people. And I shouldn’t feel sorry for some of you, but I do”.

In the wake of the US presidential election of 2016, Soyinka fell out with Twitter Nigeria after he was criticized for not ripping apart his green card in the event of a Trump win, like he had promised.

“If in the unlikely event he does win, the first thing he’ll do is to say [that] all green-card holders must reapply to come back into the US. Well, I’m not waiting for that,” Soyinka had said at the time.

“The moment they announce his victory, I will cut my green card myself and start packing up,” he had added.

As Trump swept the electoral college to emerge president on the morning of November 9, 2016, Nigerians flooded the internet to remind Soyinka of his pledge.

It was the moment Soyinka and Twitter Nigeria became sworn enemies.