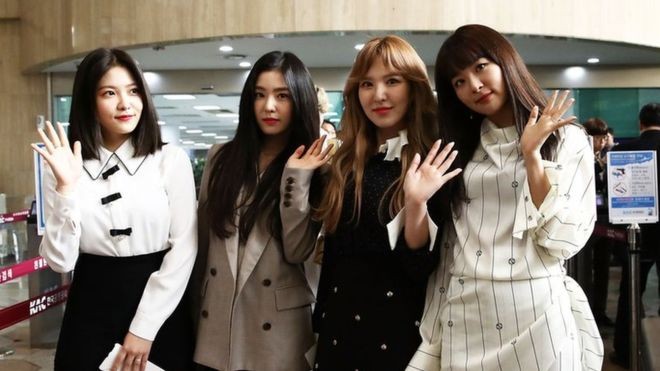 South Korea’s K-pop stars are due to perform in North Korea for the first time in more than a decade as the two countries on the divided peninsula prepare for a rare summit.

More than 150 artists are in the capital Pyongyang for two shows.

It is a reciprocal visit after the North sent performers to the Pyeongchang Winter Olympics earlier this year in South Korea.

It comes amid thawing relations between the Koreas after months of tension.

One concert takes place on Sunday, with another set to follow on Tuesday. The delegation mixes K-pop, rock and other genres.

The third inter-Korean summit – there were also meetings in 2000 and 2007 – is due to be held on 27 April. No date has been set for the US-North Korean summit.

Meanwhile, the US and South Korea have begun their annual military drills, which have been scaled down compared with previous years as both countries prepare for talks with North Korea.

In the past, the drills have infuriated North Korea but correspondents say that this time Pyongyang is keeping relatively quiet. Mr Kim reportedly told visiting South Korean officials that he understood that the exercises had to go ahead.

The musicians set to perform in Pyongyang include:

A five-member girl group, Red Velvet headlined at the Pyeongchang Games this year.

The popular quintet who first formed in 2014 are still seen as relative newcomers, but have already managed to scoop up their fair share of awards.

They have also got a large following on social media, with some 4.5 million followers on Instagram alone.

A member of undoubtedly one of Korea’s most famous K-pop groups, Seohyun made her music debut in 2007 as a member of the all-female Girls’ Generation.

The group shot to stardom in 2009, making Seohyun one of today’s most recognisable K-pop singers.

In February, the 26-year old performed alongside North Korea’s 137-strong Samjiyon Orchestra, which was part of North Korea’s art troupe during the recent Winter Games.

An industry veteran, Cho is considered one of the most influential figures in South Korea’s music scene.

In an interview with Billboard in 2013, the 68-year-old singer was dubbed a “K-pop legend”.

This is not his first performance in North Korea.

Mr Cho made his first debut in Pyongyang in 2005, where he held a solo concert attended by some 7,000 North Koreans – making him the most recent South Korean singer to perform in the North.

Another iconic singer in South Korea, Lee Sun-hee first made her debut in 1984.

The now 53-year-old travelled to the North for a joint concert in 2003, which marked the opening of the Ryugyong Chung Ju-yung Gymnasium – one of the performance venues for the upcoming concert.