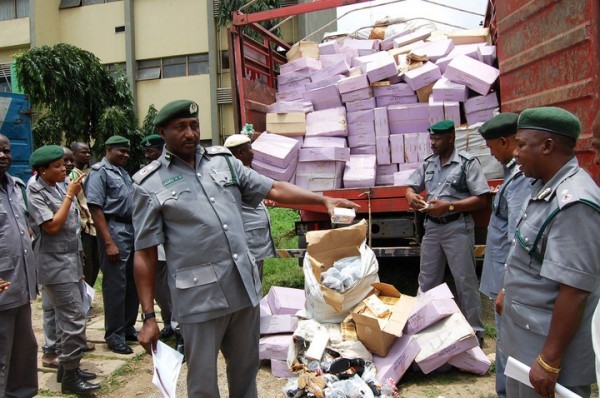 The Area Controller of the Oyo/Osun Area Command of the Nigeria Customs Service, Udo-Aka Emmanuel, has alleged that rice smugglers are repackaging contaminated rice from the Republic of Benin with the aim of supplying them to the Nigerian market.

Emmanuel spoke while showing journalists a truck and two buses loaded with contaminated rice, which were impounded along Iseyin-Oyo Road.

The Area Controller said that 853 bags of rice were found in the three vehicles, adding that apart from the rice, 395 (25 litres) kegs of imported vegetable oil were also seized from smugglers at different locations.

He said the seized bags of rice had passed their shelf lives, having been stored in various warehouses at the Republic of Benin for so long after the owners found it difficult to smuggle them to Nigeria. He said that to make the rice attractive to buyers, the bags were changed to reflect new expiry dates.

He said, “These seized bags of rice have been stored in warehouses at the Republic of Benin without proper pest control, making them prone to all manner of diseases. We should also understand that most of these smuggled products have exceeded their shelf lives and therefore expired and are not safe for consumption. Yet they are re-bagged and relabelled and dumped in our country.

“The smugglers took advantage of the recent mass deployment of officers and men in the Nigeria Customs Service to indulge in their unwholesome activities with the belief that we will be caught off guard. The duty paid value on the rice is N14.6m while that of the vegetable oil is more than N3m. No suspect had yet to be arrested because the drivers and motor assistants abandoned the vehicles and ran away on sensing that they had been trapped by the patrol team.”

Emmanuel said the command would always try as much as possible to avoid unnecessary bloodshed when confronting smugglers, stressing that the command would continue to rely on intelligence gathering from sources to arrest suspects.