Singh says he disagrees with Hamilton MP’s post on racism in Quebec, but demands no apology 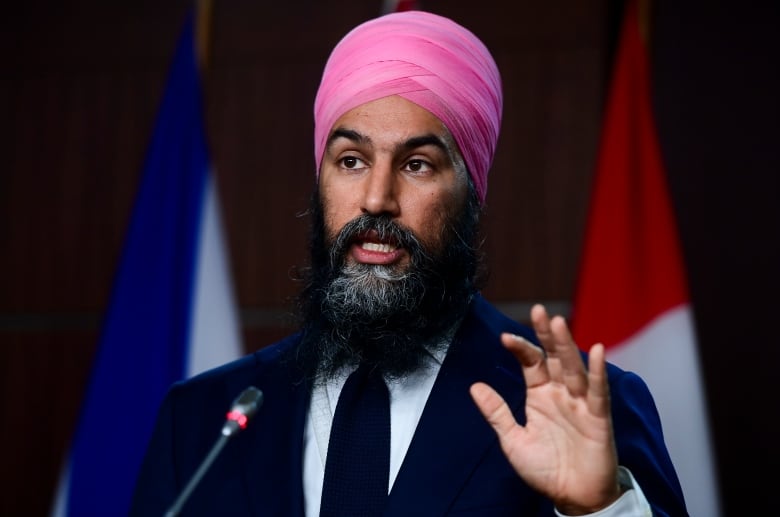 New Democrat Leader Jagmeet Singh says he does not agree with accusations that Quebecers are racist, after one of his Hamilton MPs applauded controversial remarks on the subject by a University of Ottawa professor.

Nonetheless, Singh said Hamilton Centre NDP lawmaker Matthew Green, who is Black, has the right to express himself as a racialized Canadian and that every province and territory continues to struggle with systemic racism.

“A racialized MP who has had experiences in his life and who fights against systemic racism has the right to speak,” Singh said in French at a press conference in Ottawa on Tuesday. “He doesn’t have to apologize.

“I’m absolutely not in agreement with the idea that Quebecers are racist,” he added, but said that “white supremacy exists across the country.”

In a Twitter post Monday evening, Green gave “kudos” to law professor Amir Attaran “for standing his ground against the racism he sees perpetuated in Quebec.” Attaran has claimed on social media that Quebec is led by “a white supremacist government” and resembles an “#AlabamaOfTheNorth.”

Attaran’s statements, and the University of Ottawa’s move to distance itself from them but not apologizing, drew blowback in Quebec.

At a joint press conference in Trois-Rivieres on Monday, Prime Minister Justin Trudeau called for an end to “Quebec bashing” and Premier Francois Legault said he was disappointed with the institution’s response.

Bloc Quebecois Leader Yves-Francois Blanchet said Attaran’s remarks themselves amount to a kind of racism against Quebecers as a minority group. The professor rejects the accusation on the grounds that residents of any particular province, and francophones, “are not races.”

“What this teacher said and wrote repeatedly is a terrible thing, because it’s false. I am worried that those values and convictions of his might transpire in his teachings, and that would be a really worrying thing,” Blanchet said Tuesday.

In October, Blanchet stood on the other side of the free-speech debate, defending a different University of Ottawa professor’s use of a racial slur on the grounds it was uttered “in the context of education.” The university suspended the professor, Verushka Lieutenant-Duval, in September after a student filed a complaint.

Like clockwork the culture of white supremacy demands “freedom of speech” for white folks to spew racist rhetoric than demands censorship from anyone who calls them out on it.<br> <br>Kudos to <a href=”https://twitter.com/profamirattaran?ref_src=twsrc%5Etfw”>@profamirattaran</a> for standing his ground against the racism he sees perpetuated in Quebec. <a href=”https://t.co/huf8mebltM”>https://t.co/huf8mebltM</a>

“Like clockwork the culture of white supremacy demands ‘freedom of speech’ for white folks to spew racist rhetoric than (sic) demands censorship from anyone who calls them out on it,” Green said in his tweet.

Freedom of expression ‘not a buffet’

University of Ottawa president Jacques Fremont said in a letter to Parti Quebecois Leader Paul Saint-Pierre Plamondon on Sunday that the institution does not share Attaran’s opinions, but that they were posted on his personal Twitter account and thus not subject to sanction, as words spoken in the classroom might be.

“I deplore these kinds of highly polarizing statements made in public forums, particularly on social media. Along with others, I find it disturbing to see such a vindictive tone and personal attacks posted on Twitter and other platforms,” Fremont wrote.

“Nonetheless, freedom of expression, we will agree, is not a buffet where one can pick and choose what kind of speech is deemed acceptable or not.”

Plamondon had asked for an apology from the university following the remarks from Attaran, whose blunt, provocative Twitter posts have prompted numerous social-media dust-ups.

He has called Quebec’s culture racist and accused its nurses of “medical lynching” in regard to Joyce Echaquan, a 37-year-old Indigenous woman who died in a Quebec hospital in 2020. He has also said the federal government shouldn’t send field hospitals to Alberta in light of that province’s relatively permissive handling of the COVID-19 pandemic.