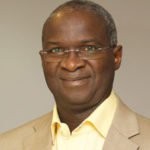 The Senate and House of Representatives are squaring up to Works, Housing and Power Minister Babatunde Fashola over allegation that the legislature messed up the ministry’s 2017 budget.

They labelled the minister’s allegation as wrong information, half truth and blackmail.

Fashola, last week, accused the lawmakers of slashing his ministry’s appropriation for some critical projects, and at the same time introducing 100 new projects to the 200 uncompleted ones he inherited from the Jonathan administration.

The first response came from the Senate whose spokesman, Aliyu Sabi Abdullahi, said Fashola did not give the public full details about the Lagos-Ibadan Expressway.

Abdullahi said the project commenced as a private finance initiative whereas the minister prefers an arrangement that allows the Ministry to continue to award contracts and fund the project through government budgetary allocation at a time when the nation’s revenue is dwindling.

According to him, the Bureau of Public Procurement, and the Federal Executive Council in 2013, approved the reconstruction, rehabilitation and expansion of the Lagos-Ibadan expressway as a Public Private Partnership project using the Private Finance Initiative, with the Federal Government providing about 30 percent of the funding while the balance shall be provided by the private sector.

The project was on course for completion by end of 2017 when the private finance initiative was being implemented, with over 30 percent completion rate attained as at early 2015.

Abdullahi further noted that in a blatant disregard for existing agreements, constituted authorities and extant laws, Fashola on assumption of office got government through the Ministry to start voting money for the implementation of the project.

“Even as at last year the 2016 Appropriation Act voted N40 billion for the project on the insistence of the Ministry and only N26 billion was released. If we had known, the rest N14 billion could have been allocated to other critical roads across the country”, he said.

He added: “In the spirit of consensus building and effective stakeholder engagement, the leadership of the Senate met with key relevant stakeholders, including the Ministries of Works and finance.

“It was agreed that we should give the Private Finance Initiative a chance to complement government’s resources in the delivery of critical infrastructure assets across the country. Hence, in this year’s budget, we have engaged with the Government and private sector groups who have assured that they will resume funding of the project.

“So, we only provided the fund in the budget that would ensure work does not stop before the funds from the private sector start coming in .What we reduced from Lagos-Ibadan Expressway in the 2017 budget estimate was spread on Oyo-Ogbomoso road in the South-west, Enugu-Onitsha road in the South-East, and two other critical roads in the North-East and North-West; and this was done to achieve equity. The Minister should realise he is Minister for the entire country and not just that of Lagos State.

“It is our view that the Federal Government cannot fund the reconstruction and maintenance of all the 34,000 kilometres of roads under its care. We are looking for private funds for some of these roads, particularly those with high potentials of attracting private investors. These include the Enugu-Onitsha road, Kano-Abuja road and Abuja-Lokoja road. It has been our hope that the Lagos -Ibadan road would be a model for private sector funding of infrastructure in the country.”

The Senator said Fashola’s   statement was in bad taste and should “desist from spreading half-truths.”

“When he said the National Assembly imported projects into the 2017 budget, he did not mention that these include the 26 projects which the Federal Government approved in the 2016 budget, awarded contract for them in January 2016, but totally omitted them in the 2017 budget. One of them is the Abuja-Kaduna road. These ones would have become abandoned projects. We reduced funds across board to make provision for these omitted projects that are of critical importance to the socio-economic development of the country in line with equity and fair play.”

For its part, the House of Representatives said Fashola’s remarks were meant to paint the National Assembly as an irresponsible institution, “one not concerned with the welfare of the people, and set the Executive and Legislature on an unnecessary collision course on matters of power rather than issues that benefit the Nigerian people.”

House Spokesman, Abdulrazaq Namdas said ” the decision to redistribute the projects proposed by  the ministry was in order to ensure an even spread of projects across all regions, which the proposal of the executive had failed to do.

“The truth is that in the 2016 Budget, N12 billion was appropriated for the second Niger Bridge and not a kobo was spent by the Ministry. Not a kobo. The money was returned. The Ministry could not provide the Committees of the National Assembly with evidence of an agreement on the Public Private Partnership (PPP) or a contract for the 2nd Niger Bridge.

“The projects include – N2.5 billion extra for Enugu/Onitsha Road, N1 billion more for 9th Mile/Nsukka/Makurdi Road; additional N500m for Oturkpa- Makurdi to take care of evacuation of agricultural produce up to Maiduguri; N1 billion more for Ikot Ekpene-Aba-Owerri Road etc. These are strategic Roads in the South-East and North Central parts of Nigeria that had inadequate allocations.

“The National Assembly had to intervene to fund some other critical roads that were totally neglected in the Executive Budget proposal, including the Abuja- Kaduna – Zaria – Kano Road that had Zero allocation from the President’s proposal and no contract, even in spite of due process certification.

“N5 billion was provided in the 2016 Budget. It was not utilised. In 2017 Budget, the National Assembly again provided N3 billion for this very critical road that connects many states and where incidents of kidnapping are rife because of bad roads, as we believe that all parts of Nigeria deserve attention or would the Minister also claim that this road has no design?”