Security guard lands in jail for sleeping on duty 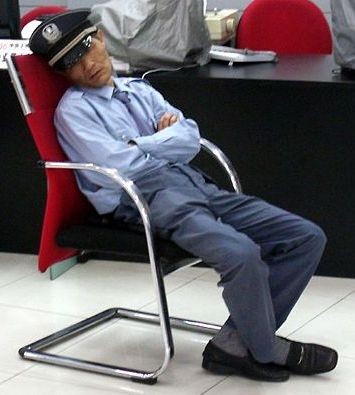 A Karmo Grade 1 Area Court, Abuja, on Wednesday sentenced a security guard, Zakaria Jacob, to four-month imprisonment for sleeping at his duty post.

As a result of his alleged night nap, the court said, thieves burgled his employer’s premises.

Jacob, 32, who resides at Waru Apo village, Abuja, is standing trail on a count charge of negligent conduct.

Jacob pleaded guilty to the charge.

The judge, Mr. Abubakar Sadiq, however, gave him an option to pay N20,000 fine, and warned him to be more committed to his work.

Prosecuting counsel, Dalhatu Zannah, had told the court that one Okandza Pieme of 350, Williams St., Utako, Abuja, lodged a petition on the matter at the Utako Police Station on June 3.

Zannah said the complainant employed the convict to work as a security guard in his house.

He said the convict was expected to be on duty at the time the crime was committed.

Zannah said Jacob was however sleeping and abandoned his duty post, paving the way for burglars to gain access into the complainant’s apartment.

He said the burglars made away with the complainant’s laptop, three Samsung cell phones valued at N610,000, cash and some other valuable items

The prosecutor said that all efforts by the Police to recover the stolen items proved abortive.

Zannah said the offence contravened Section 196 of the Penal Code.