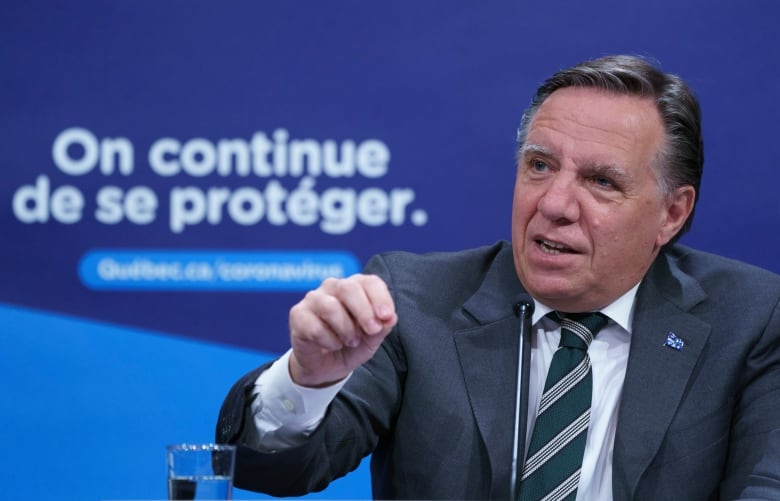 The announcement frustrated some health experts, who believe the province needs to follow other jurisdictions around the world to also make masks mandatory in all indoor public spaces, such as stores.

The new rule will apply to anyone over the age of 12 who is taking a bus, commuter train or the Metro. For children younger than that, wearing a mask is strongly recommended by the province, but not obligatory.

Following a two-week grace period — that is, after July 27 — transit officials will be required to bar access to users who refuse to wear a mask, Legault said.

But, he added, there will be no fines for people who disobey the new rule, nor will police be specifically tasked with enforcing it.

“We also need to count on the respect and solidarity of the population,” Legault said. “The goal is to respect other people.”

Mask use needs to be more widespread

His government stopped short of making masks mandatory in other indoor public spaces, such as stores.

That additional measure is being adopted by a growing number of jurisdictions amid concerns a new wave of infections could erupt sooner rather than later.

Toronto Mayor John Tory is pushing for his city to adopt a temporary bylaw making masks mandatory indoors, which he hopes to have in place by the time new rules for masks on his city’s public transit go in place next week.

Ontario’s Peel region, just outside Toronto, announced Tuesday it was making masks mandatory in stores and other indoor public spaces.

In the United States, 18 states have rules requiring a mask when physical distancing isn’t possible, such as at the grocery store or on public transit.

“We are lagging behind in adopting this measure,” said Dr. Amir Khadir, an infectious disease specialist and a former opposition politician. “The government risks destroying its credibility.”

Khadir was among 30 health experts who signed an open letter earlier this month calling on the Quebec government to require a mask anywhere that physical distancing is impossible.

The group pointed to a recent study, which is awaiting peer review, that demonstrated COVID-19 transmission chains could be broken if 80 per cent of the population wears masks in public.

Reaching that 80 per cent threshold in Quebec, Khadir said, will require the government to make masks mandatory beyond just public transit.

“If there is a game-changer, this is it,” he said.

‘It has to become a social norm’

So far in Quebec only the Montreal municipality of Côte Saint-Luc has passed a bylaw making a mask mandatory in businesses.

At Tuesday’s news conference, Legault didn’t rule out the possibility that Quebec would eventually follow suit with a province-wide rule.

He said the decision would be based on a number of factors, including how the COVID-19 situation evolves.

In recent weeks, the number of cases, hospitalizations and deaths has trended downward across the province, even as lockdown measures continue to be lifted. Bars, spas and water parks were allowed to reopen last week.

But projections released this week by Quebec’s public health research institute warned Montreal could be hit with another wave of infections as early as August if Montrealers waver in their obedience to public-health guidelines.

WATCH | How will Quebec enforce the wearing of masks on public transit?

There won’t be fines for those who don’t comply, but transit authorities will have to bar people from getting on board a bus or metro. 1:52

The province’s public-health director, Horacio Arruda, said regardless of whether it is mandatory to wear a mask inside a public space, Quebecers should nevertheless make it a habit.

“It has to become a social norm,” Arruda said, comparing it to taking one’s keys when leaving the home.