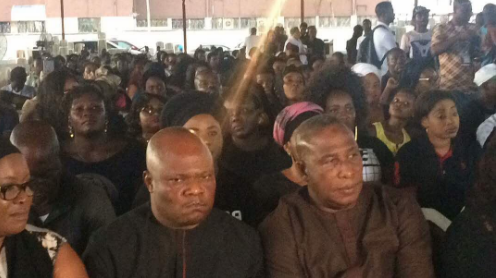 With the high turnout of mourners, especially Nollywood practitioners, at the obsequies of actress, Moji Olaiya, one may be tempted to think that everybody who has ever appeared before a camera in ‘Yoruba Nollywood’ was at the memorial service held at LTV8, Ikeja, and the funeral service, the next day at Ikoyi Vaults.

However, that was not the case as some prominent actors  who had acted alongside the deceased in her lifetime, were nowhere to be found at the two-day event.

While the reason for the absence of some of them could not be ascertained, Bimbo took to her Instagram page to state why she wasn’t there. She wrote, “Sun re. I could not attend your burial because of work but I will never forget you. Your gentleness, your smile, your beauty, your talent, your laughter. I will cherish the memories of you I have, even though we had not seen each other for a while you always were in my heart. Rest in peace Moji #gonetoosoon”

In a chat with Mr. Latin, he disclosed to our correspondent that he was ill during the funeral service, hence his absence. He said, “I wasn’t feeling too fine on those days. But I have done what I was supposed to do for the family.”

In a similar vein, Sanyeri, told Sunday Scoop that he was in faraway Kogi State during the days slated for the last rites of the actress and he couldn’t make it. He also said that he had reached out to Moji’s family to render his support.

Funke Adesiyan had earlier lambasted her colleagues for failing to come up with financial support towards the burial of the late actress. She wrote, “Life is funny. People are really not worth the trouble. The essence of being part of an association, group et al is so you can be there for one another in matters related to you all. It’s really a shame that many artistes came on social media, flooded Moji Olaiya’s house shedding tears and when it boils down to extending a helping hand, many chickened out. Artistes were billed 100k each to bring Moji’s body down. If 50 of us contribute N100,000, we have 5million which is about $15,000 (medical rate). Many didn’t contribute a penny. All they know how to do is flaunt wealth that they don’t have on social media. The house you live in is being paid for by others, the car you drive na dash, the supposed business you own, you are not making a dime from. My sister/brother, quit living large and forming rich on other people’s largesse…”

Explaining the reason for her absence, Adesiyan told Sunday Scoop, “I attended the special prayer that NASFAT held for the deceased at Magodo before the burial, alongside some colleagues in the industry. As for the artiste night and burial ceremony, I wasn’t in the country. I just got back.”

Shortly after Adesiyan’s post, Biodun Okeowo had also written, “To those looking for celebrity comments, nobody needs to drop a comment to counter Funke. She may be right to some extent, that doesn’t mean that I concur to this post because washing our dirty linen in public is uncalled for. If there are artists who have done nothing to support, that might not be too good but it should be an in-house thing; not for the public. At the same time, we should not forget that fingers are not equal. Besides, no artist will come on social media to give lists of artists who dropped their widow’s mite towards bringing Aunty Moji’s body home…”

Sunday Scoop reached out to the absent actors but Biodun Okeowo, Liz Da Silva, Funke Etti, Kunle Adegbite, Bukky Wright did not pick their calls. Funke Akindele answered the phone but as soon as she heard what Sunday Scoop wanted to know, she hung up the phone and didn’t pick subsequent calls put through to her.