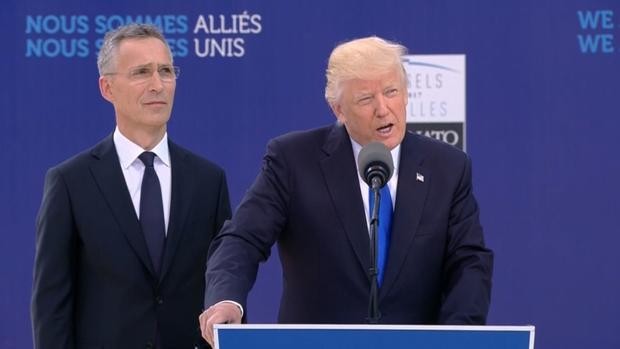 United States President Donald Trump has been caught sleeping while their Italian host, Prime Minister Paolo Gentiloni, was speaking during the G-7 Summit held in Italy this weekend.

In the clip, the camera pans across a board of world leaders all listening intently with their headphones to translations of Gentiloni’s speech.

German Chancellor Angela Merkel was seen giving her fingernails a swift glance as she listened and Tunisian President Beji Caid Essebsi closed his notes as he sat back in his chair.

Then US President Donald Trump appears in the frame. He appears to be wearing a very serious facial expression as he listened to the Italian speech.

But there’s one very obvious difference between him and the others: He is not wearing headphones as are other world leaders, making people to wonder if he speaks Italian fluently as not to need a headphone.

The President’s Press Secretary, Sean Spicer, however gave an explanation concerning why Trump wasn’t wearing headphones, though many observers disagreed with him, saying Mr. Trump did everything at that moment except listening to the speech.

In Spicer’s tweet explaining his principal’s posture he wrote:

As usual @POTUS wears a single ear piece for translation in his right ear https://t.co/Opm2qk1hOQ