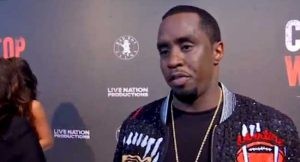 Veteran musician Sean Combs, known also as Puff Daddy or P Diddy, stepped out to premiere his documentary “Can’t Stop, Won’t Stop: A Bad Boy Story” ahead of its release on Apple Music on June 25.

The film follows the businessman as he prepares to put on two Bad Boy reunion concerts in Brooklyn over a three-week rehearsal period.

“I really was trying to do a concert tour documentary but it turned into something bigger,” Combs said at the premiere.

“When we started shooting it, it was like life and art collided so we had to deal with our past and different things that got us to this point so it turned into a bigger film. It turned into a feature film rather than a regular documentary,” he added.

The film delves into the origin of Combs’ career and also features the killing of his protege, Notorious BIG, in a drive-by shooting in 1997.

Combs was recently announced by Forbes as being hip hop’s wealthiest artiste with an estimated net worth of $820 million, because of numerous lucrative business deals.

“I’d say I’m a combination of art and commerce, a perfect blend,” he stated on the red carpet. “I’m an entertainer, more like a ringmaster, so the ringmaster vibe goes through performance and even business.”