Osinbajo Assures G7 Of Africa’s Collaborations In Security, Others 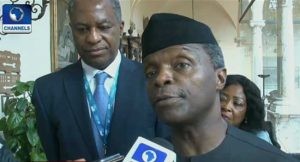 Speaking on the sidelines of the just concluded summit in Italy, the Acting President described as fruitful, stressing that Nigeria is looking to ensure that the promises made are kept.

He also held discussion with the world leaders on possible partnership in the areas of technology, agriculture and sustainable energy.

Professor Osinbajo told Channels Television that it was a great opportunity to meet with the G7 countries to exchange ideas on what to do as nations in Africa going forward.

“The major issues discussed were the possibilities that innovation offers for development in Africa and indeed all over the world.

“But I think that we were particularly concerned with the collaborations that are possible with the G7 countries, especially with respect to technology in agriculture, technology in some of the work that we’ve been doing in social investments, payment systems and environment, especially the use of renewable energy.

“And we talked extensively also about security and about some of the very great partnerships that have been formed with the U.S., Italy, Germany, France and the UK.

“In particular, our joint-intelligence unit which is located in Abuja, and we had an opportunity to discuss a bit of detail about how that has worked very well and some of the challenges we expect to see going forward,” he explained.

The Acting President commended the G7 countries for their support in the fight against Boko Haram insurgency, especially the United States, France and the UK as effective partners in the Lake Chad basin.