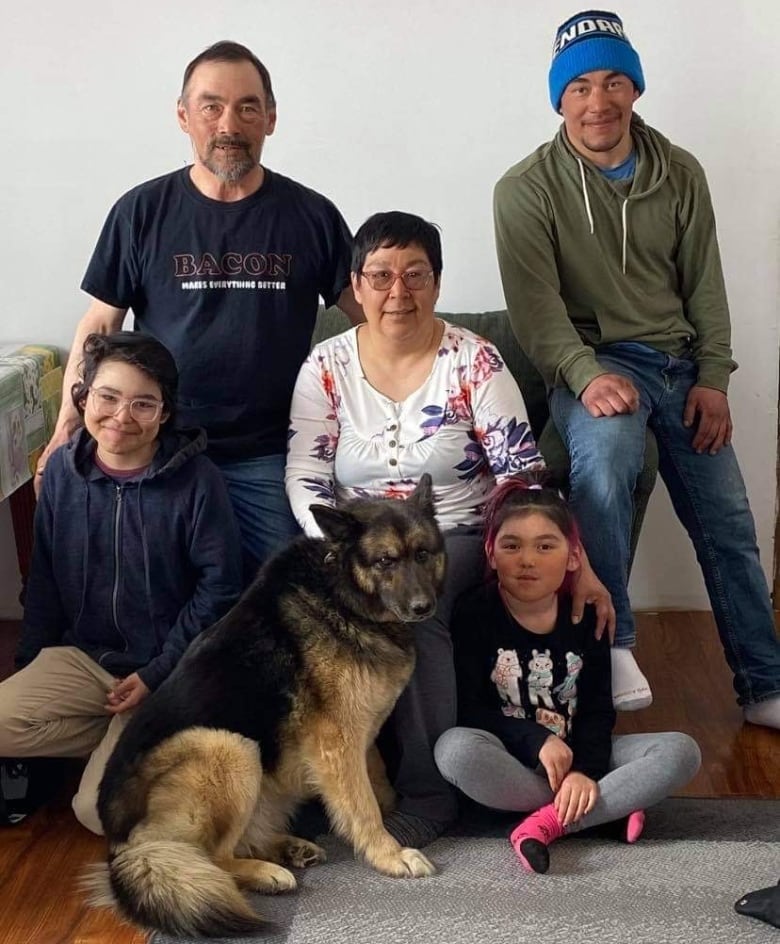 Donna Adams wouldn’t have guessed that her dog Pepper had it in her.

But the 10-year-old German shepherd — typically found lolling about outside Adams’s home in Rankin Inlet, Nunavut — floored everybody by making a 70-kilometre journey along the remote Hudson Bay coast on her own, to track down her family in a distant community she’d never been to.

“We were elated. Like, I just couldn’t believe it,” Adams said, recalling the dog’s surprise arrival in Whale Cove.

“She just likes to laze around. We used to get a lot of charges from the bylaw for having an untied dog, but even I think they gave up too, because she doesn’t go anywhere!”

Pepper’s big adventure earlier this month began on a sad note — a death in Adams’s family, with a funeral to be held in Whale Cove, a smaller community down the Hudson Bay coast. Adams’s family planned to fly there from Rankin, but a cancelled flight prompted them to travel by snowmobile instead.

They were getting ready to set out when Pepper started to act up.

“She was really, really trying to follow us. She even hopped on the sled. We told her to get off and go inside, go home,” Adams recalled.

“I think she felt the grief or the trauma that we were feeling. She just knew something was up, and she didn’t want to leave us.”

Eventually, Pepper was coaxed back home. One of Adams’s daughters was still there, at least until the next day when she would catch a rescheduled flight to meet her family in Whale Cove.

Adams figures it was some time after her daughter left that Pepper also skipped town. Her son had stayed behind in Rankin but was at work that day, and Adams’s husband came back later that night to find Pepper gone.

“They looked everywhere. And she doesn’t move around anymore. She doesn’t leave,” Adams said.

The family was distraught, and puzzled, but they were also dealing with a family tragedy and so finding Pepper was not their top priority.

“We just let it go. We kind of just accepted that, well, she’s gone,” Adams said.

‘The land freaks her out’

It wasn’t like Pepper to just take off, and not just because she’s usually a lazy homebody. According to Adams, the dog just doesn’t like being out of town.

“The land freaks her out, like it’s too quiet,” Adams said. “There’s nothing around, she’s too big and slow to catch siksiks [ground squirrels] … no people and nothing around — that’s what bothers her.”

Adams and a couple of her kids stayed on in Whale Cove. They had been there for a few days when someone in town showed them a picture of a dog that had seemingly wandered into the remote village.

It was Pepper. Somehow, the dog had swallowed her fears and travelled alone for days across the vast, silent landscape of ice and tundra to find her people.

Whale Cove is pretty small, so it took Adams and her family about 10 minutes to track Pepper down after the dog was first spotted.

“She looked a lot, like 10 years younger — because she lost a lot of weight!” Adams said, laughing.

“I burst into tears the moment I saw her. I don’t think I’ve ever experienced that. Just burst in tears of joy.”

Adams said Pepper’s incredible journey was soon the talk of the town — in Whale Cove, and back in Rankin Inlet.

“Everybody was so happy to hear of the story. I mean, especially on her own, completely on her own! And she’s never been taken to Whale Cove with us before,” Adams said.

“We were all so excited, and relieved — and very proud of her.”