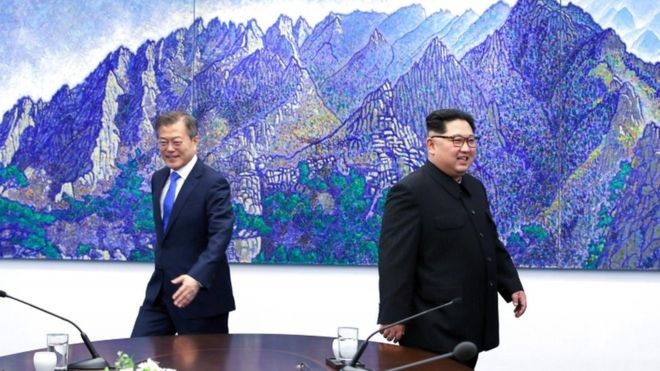 Chinese Foreign Minister Wang Yi is to visit North Korea this week, after historic talks between the North and South last Friday.

The trip comes amid a flurry of diplomatic activity following the landmark day on the peninsula.

China is North Korea’s only remaining economic ally, but this will be its highest level visit there in years.

South Korea has already spoken to the leaders of US and Japan.

According to Beijing, Mr Wang’s visit on Wednesday and Thursday is being made at the invitation of the government in Pyongyang.

In March, Mr Kim made a surprise visit to Beijing to see Chinese President Xi Jinping, his first international trip since taking office, underlining the importance to Pyongyang of its relationship with China.

On Friday, the North Korean leader and the South’s President Moon Jae-in agreed at an historic summit to “completely cease all hostile acts against each other” and to work towards denuclearising the Korean peninsula.

The meeting followed months of warlike rhetoric and missile tests from the North.

Mr Kim and Mr Moon said they would also pursue talks with the US and China to formally end the Korean War, which ended in 1953 with a truce, not formal peace.

Mr Trump has since said talks with North Korea could take place “over the next three or four weeks”.

Many analysts, however, remain sceptical about the North’s sudden enthusiasm for engagement.

Among the announcements on Friday, Pyongyang said it would change its time zone to run in sync with the South again “as a first practical step for national reconciliation and unity”.

The current Northern time zone – 30 minutes behind the South – was created in 2015 to mark the 70th anniversary of Korea’s liberation from Japanese occupation after World War Two.

According to North Korean state media, Mr Kim said it was “a painful wrench” to see clocks showing different times on the wall during the summit.

Also on Monday, South Korea said it would take down its loudspeakers which have historically blasted propaganda into the North over the border.

A defence ministry spokesman said it was a “rudimentary” step to help build trust between the Koreas, the Yonhap news agency reports.

The loudspeakers had already been turned off ahead of Friday’s summit.