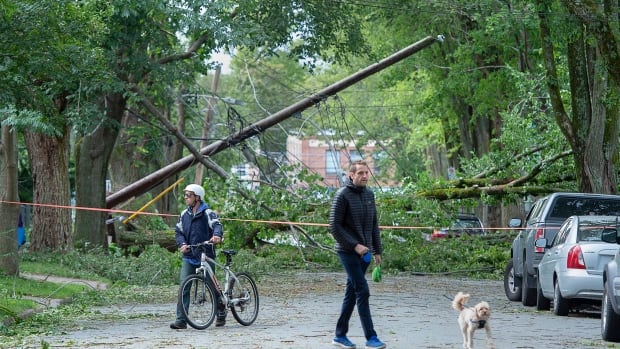 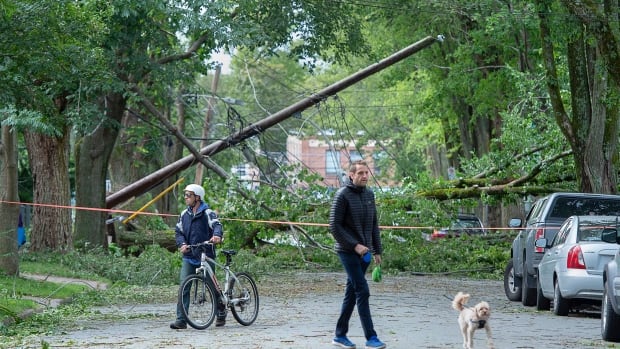 All Nova Scotia public schools will be closed Monday as a result of the damage left behind by Hurricane Dorian, a powerful Category 2 hurricane that became a post-tropical storm as it swept through the region on Saturday.

“It really is about keeping buses and kids at home and safe, so that we can try to restore power and get rid of any of the real dangerous situations like trees that are hanging over wires, or power lines that are down, and get those cleaned up and have kids back in school on Tuesday,” said Premier Stephen McNeil at a press conference Sunday.

The Conseil scolaire acadien provincial announced its schools would also be closed Monday.

Nova Scotia Power says it could be days, not hours, before some customers have their electricity restored.

“We know that it’s frustrating we can’t give [customers] a specific time right now, but we would rather try to be more accurate,” Karen Hutt, president and CEO of Nova Scotia Power, said during a press conference on Sunday.

“And so I ask that you give us a little bit of patience and you can bet as soon as we know information, we’re going to convey it.”

Most populated areas to be restored first

According to Nova Scotia Power’s outage map, some customers could be waiting until Wednesday at 11 p.m.

Some of the communities with the longest waits for power restoration are in Cape Breton.

Five comfort centres have been opened to help:

The most populated areas will be restored first, Hutt said.

She said crews are coming in from Maine, in addition to crews already in Nova Scotia from New Brunswick, Ontario and Quebec.

Some crews from Florida affiliated with Emera — Nova Scotia Power’s parent company — have also been called to Nova Scotia to help.

What to keep in mind Sunday and Monday

By end of day Sunday, Nova Scotia’s Emergency Management Office and the Halifax municipality had issued updates for Monday.

Anyone with a court date scheduled for Monday should check in with their lawyer or call the courthouse to confirm whether a specific court is open.

Officials are asking for patience as emergency vehicles are given priority at gas stations.

Residents are still encouraged to stay home and off the roads.

“There have been instances of drive-thru lines impeding emergency vehicles,” EMO said.

Halifax Transit operations will return to normal on Monday morning and the municipality is encouraging people to take the bus instead of driving in order to “assist work crews with their clean-up efforts by reducing the number of vehicles on the road.”

Most Halifax municipal offices will be open for business, depending on access to power.

Residents can expect to see members of the military in numerous locations across the region as they help municipal work staff, Halifax Water and Nova Scotia Power restore services.

The Halifax municipality is also asking residents to keep out of parks.

Regularly scheduled garbage pick up for Mon., Sept. 9, has been cancelled and postponed until Mon., Sept. 16 and will include a full collection of garbage, organics and recycling.

Anyone collecting branches for pick-up should bundle them in armload-size bundles, to a maximum of 10 bundles for collection day of the next two weeks.