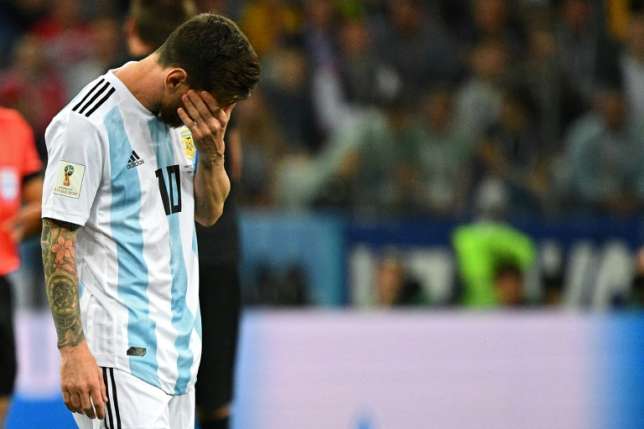 Lionel Messi’s Argentina were on the brink of a humiliating World Cup exit on Thursday after they were humbled 3-0 by Croatia on a dramatic day at the World Cup that saw the European side join France in the knockout rounds.

Lionel Messi’s Argentina were on the brink of a humiliating World Cup exit on Thursday after they were humbled 3-0 by Croatia on a dramatic day at the World Cup that saw the European side join France in the knockout rounds.

Argentina knew they had to chase a win in Nizhny Novgorod after their disappointing 1-1 opening draw against Iceland but instead collapsed in the second half to leave their campaign in tatters.

A horrendous mistake by goalkeeper Willy Caballero and two further goals from Luka Modric and Ivan Rakitic mean the two-time former champions have to rely on an unlikely sequence of results if they are to progress in Russia.

It was the heaviest defeat for the two-time world champions in the first round group stages of a World Cup tournament since they lost 6-1 to Czechoslovakia in 1958.

The result spelt another night of misery for Barcelona star Messi, who missed a penalty in Argentina’s opening match against Iceland.

In stark contrast, his eternal rival Cristiano Ronaldo, who last month won his fifth Champions League winner’s medal, has already scored four goals in Russia and looks a shoo-in to win his sixth world player of the year award.

Croatia sit at the top of Group D with six points. Iceland have one point, the same as Argentina, and Nigeria have no points, but both teams have a game in hand on the South Americans.

“I had to devise a plan for this match. If I had set things up differently, things might have turned out much better. I don’t think it’s realistic to put the burden on Caballero (for his mistake),” said Argentina coach Jorge Sampaoli.

“I think because of the reality of the Argentinian squad, it clouds Leo’s brilliance. Leo is limited because the team doesn’t gel ideally with him as it should. As coaches we need to realise these things and try to deal with them and I’m the one that needs to accept it.”

Yet Sampaoli’s remarks, implying that Messi’s team-mates were to blame, drew a blunt response from normally affable striker Sergio Aguero, hinting at tensions in the Argentine camp.

“Let him say what he wants,” Aguero said, when asked to comment on Sampaoli’s verdict.

It is the first time that Croatia have progressed past the World Cup group stages since their third-placed debut in 1998.

“Argentina weren’t confused, we were excellent.”

But a fierce post-mortem was already under way in Argentina, where the press tore into Messi and his team.

“Catastrophe against Croatia, Argentina disappoints and is on the way out of the World Cup,” the Clarin newspaper wrote on its website.

France, who won the tournament on home in 1998, earlier joined Russia and Uruguay in the last 16 with a 1-0 win against Peru, who cannot now progress from the group stage after two defeats.

Paris Saint-German star Kylian Mbappe tapped into an empty net in the 34th minute in Yekaterinburg and the South Americans were unable to respond.

Mbappe is now the youngest French goalscorer at a World Cup, aged 19 years and 183 days, beating David Trezeguet’s record of 20 years and 246 days.

Denmark, also in France’s Group C, stayed on course for the knockout rounds after drawing 1-1 with Australia in the early game of the day in Samara.

Christian Eriksen’s half-volley was cancelled out by Mile Jedinak’s VAR-assisted penalty after Yussuf Poulsen’s handball, giving Denmark four points, while Australia are stuck on one point.

Australia coach Bert van Marwijk said the “last piece of the puzzle” — goals — was missing for his side who had several chances to win the game, leaving their survival in the balance.

“We had chances to win and we deserved to win, so I’m disappointed,” the Dutchman said.

Russia have defied pre-tournament predictions that they would struggle by qualifying for the knockout round for the first time since the Soviet era. They will be joined by Uruguay, condemning Mohamed Salah’s Egypt and Saudi Arabia to an early exit from Group A.

Morocco will also be leaving Russia after the first round following their defeat by European champions Portugal, who are level with Spain on four points at the top of Group B.