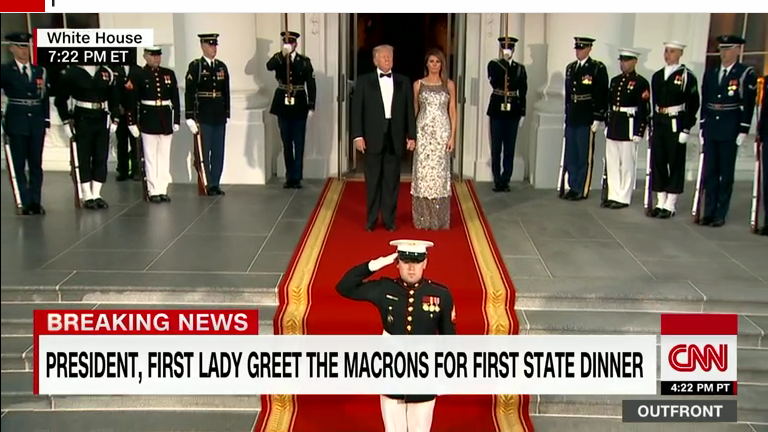 Without speaking a word, dressed in a white Michael Kors Collection asymmetrical blazer and skirt — and an eye-catching, custom-made Hervé Pierre hat — Melania Trump spoke volumes. This was her house, her dinner and her terms.
It has truly been a spotlight week for the first lady, kicking off with her attendance at Barbara Bush’s funeral, the sole White House representation joining other first ladies and former presidents and culminating with her first state dinner. In many ways, the events showcased Melania Trump’s contrasts with her husband — where he is impulsive, she is meticulous; where he is combative, she is compassionate. 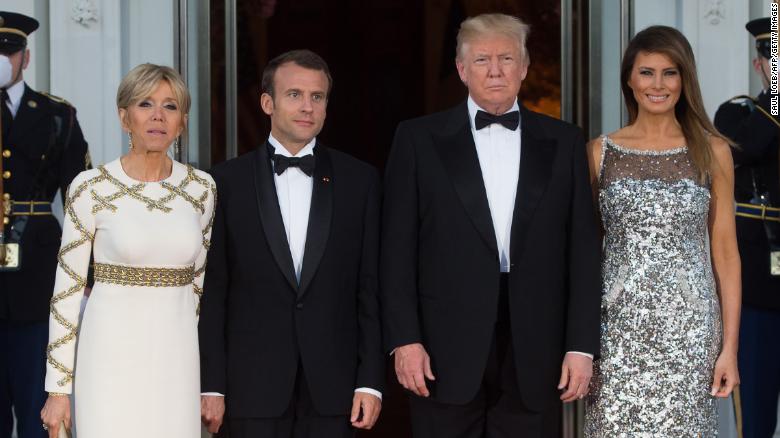 US President Donald Trump and First Lady Melania Trump pose with French President Emmanuel Macron and his wife Brigitte before a State Dinner at the White House.
The first lady paid homage to France with a Chanel Haute Couture gown, hand-painted with silver and embroidered with crystals and sequins. Dresses for state level events are allowed to be gifted by the designer to be worn at the occasion and then are the property of the National Archives.
READ: The complete guest list for Trump’s first state dinner
The President gave his wife a warm thank you for all her efforts on the dinner during his toast Tuesday night.
“To America’s absolutely incredible first lady, thank you for making this an evening we will always cherish and remember. Thank you, Melania,” he said to applause. 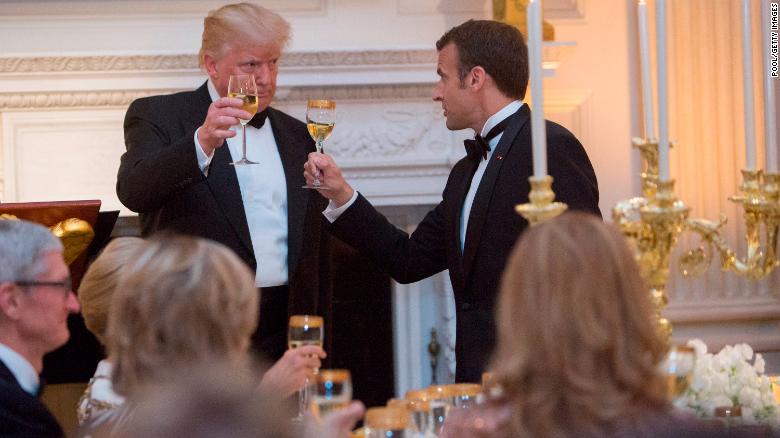 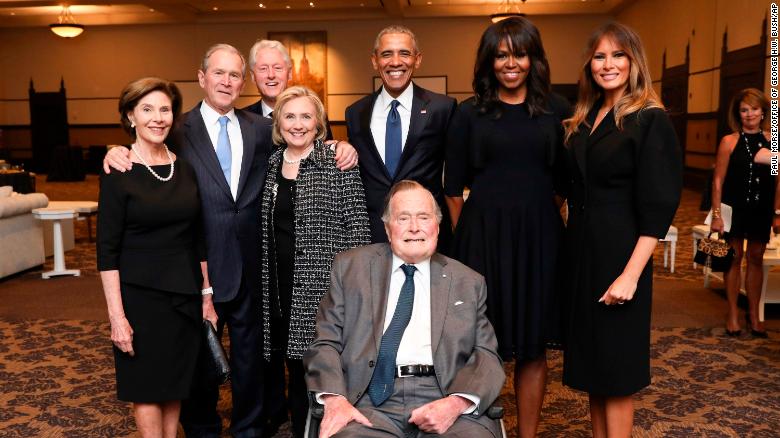 Every last detail for Tuesday evening’s state dinner has been thoughtfully and carefully overseen by the first lady, who, unlike some of her predecessors, did not hire an event planner or other outside consultants for the event.
“Mrs. Trump selected every item and every detail for the dinner,” White House social secretary Rickie Niceta told CNN.
Relying solely on her own research and aesthetic instincts, Trump crafted a cream and gold color scheme, with details spanning the patterns on the chair cushions to the honey with dessert made by bees in the White House hive.
Each of her selections for the Macrons’ visit was chosen with meaning behind it, down to the china (from the Clinton presidential era), flowers (white sweet peas and 1,200 branches of cherry blossoms), and menu (rack of lamb with accompanying Cajun-spiced jambalaya, with herbs from the White House Kitchen Garden). 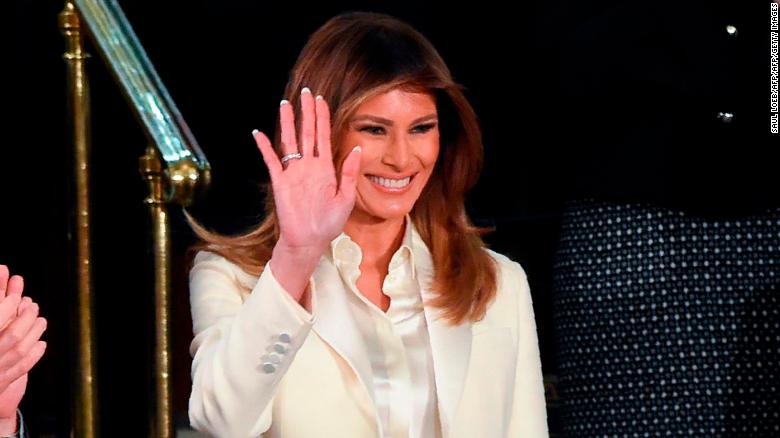 Melania Trump looks to history for inspired state dinner with the Macrons
It shouldn’t be a surprise that Trump wanted to take ownership of planning the dinner; her design background and experience in New York’s social circles and entertaining at her multiple homes make her well-suited to set the stage for a diplomatic dinner party on a grand scale. Here, she clearly felt empowered by her personal expertise, something that has been relatively absent in most of her role to date as first lady.
Prior to her husband taking office, Trump was an unfamiliar political spouse, a very private woman who had spent several years being a full-time mother. But with the state dinner, she had the chance to set the tone for one new thing in her husband’s somewhat tumultuous administration.
Trump also chose to hold the intimate dinner in the State Dining Room, which can accommodate 100 to 150 seated guests, rather than tent a larger space outside on the lawn to allow for more people, something Michelle and Barack Obama opted to do for their last couple of state dinners.
“She has been very focused on the experience of the guests, and wants to ensure they are able to truly enjoy and remember the occasion. When you are invited to a dinner at the White House, it is very special to be able to sit in the State Dining Room. After all, this is the People’s House, which is rich with history and tradition,” East Wing communications director Stephanie Grisham said.
Every detail, per the office of the first lady, was meant to “complement and pay homage to the long-standing friendship between the United States and France.”
Even the wine selection was chosen with the French-American relationship in mind. The Domaine Serene Chardonnay “Evenstad Reserve” 2015 was grown from French plants from Dijon “that thrive in the volcanic Oregon soil.” The Domaine Drouhin Pinot Noir “Laurène” 2014 “uses the motto ‘French soul–Oregon soil.'”
Following a less formal dinner with the Macrons at Mount Vernon on Monday evening, the first lady hopped off the Marine One helicopter and did one final late-night run-through, personally inspecting each detail, including the white lilac centerpieces, the dripless candles and the entry to the evening, a grand hallway decked out in soft light and pink florals.
While reports have indicated that no Democrats from Congress were invited to the affair, the first lady is making a subtle nod to bipartisanship: Guests will dine on Bill Clinton and George W. Bush presidential china settings.
Entertainment for the evening will be provided by the Washington National Opera. 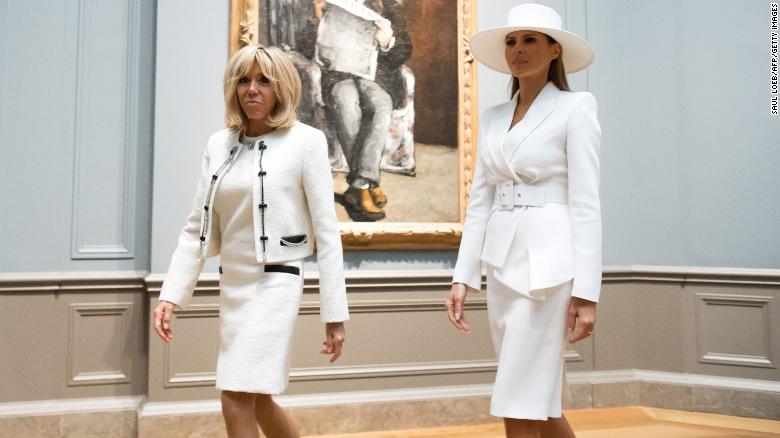 Following the morning arrival ceremony and “review of the troops,” Melania Trump hosted Brigitte Macron on a outing at the nearby National Gallery of Art.
While the President jokingly brushed “dandruff” off his French counterpart’s shoulder, the first ladies had a decidedly more dignified public visit. They toured the museum, including an exhibit showcasing French post-impressionist painter Paul Cézanne.
“Paul Cézanne’s work is a celebration,” Trump said in a statement. “It was perfect timing to have these exquisite paintings in Washington while Mrs. Macron was in town.”
The two also viewed the impressionist galleries, including the works of American artist Mary Cassatt, who worked in Paris in the 19th century.
The women kept a casual pace, listening attentively to museum officials.

One of the most challenging aspects in planning a state visit is the selection of the perfect gift for a visiting world leader. Following protocol and preserving tradition was a priority for Trump, who sought to highlight history with her gift choice.
The Trumps presented the Macrons with a framed section of upholstery from one of the chairs in the White House Blue Room. Featuring a golden eagle surrounded by laurels, the chair was part of the furniture suite inspired by Pierre-Antoine Bellangé, who designed royal palaces in France and created the 53 carved and gilded pieces for the Blue Room, which he was commissioned to create by President James Monroe. Monroe had previously served as a diplomat in France and had taken a shine to French décor.
Though President James Buchanan got rid of the set in a redecoration decades later, it was first lady Jackie Kennedy who found the spare pieces and brought them back during her quest to restore the White House. Kennedy worked with a French designer to reproduce missing items, including re-creating the fabric through the French textile firm Tassinari and Châtel.
The Trumps will also give the Macrons a photo album upon their departure with pictures of their visit, as well as a Tiffany & Co. silver bowl engraved with the presidential seal and the signatures of both Trumps.
That thoughtfulness is being reciprocated by the Macrons, who on Monday presented the Trumps with a 4½-foot-tall European sessile oak sapling from Belleau Wood, in Aisne, France, the site of a landmark World War I battle in June 1918, where nearly 10,000 US Marines and soldiers were killed or wounded. The Macrons and the Trumps planted the oak on the White House South Lawn together on Monday afternoon.

Over the last week — and the first year of the administration — Melania Trump has practiced a quiet diplomacy at contrast with her husband, not hesitating to assert her independence and saying more with her fashion choices, her selective public appearances and her attention to details than with her words.
On Saturday, she entered a lion’s den of his political rivals, traveling to Houston to pay her respects to the late Barbara Bush. She fit in with the group, many of whom the President has directly criticized, in a way her husband never could have.
Seated next to Barack Obama, the former president made the first lady crack a brief smile. She even stood, smiling, for a photo with the whole group of former presidents and first ladies.
The services for Bush capped a week that included hosting Japanese Prime Minister Shinzo Abe and his wife for two days at Trump’s Mar-a-Lago estate in Palm Beach, Florida.
Share
Facebook
Twitter
WhatsApp
Pinterest
Linkedin
ReddIt
Email
Print
Tumblr
Telegram
Mix
VK
Digg
LINE
Viber
Naver
Previous article1.9m terror related posts deleted in 3-months by facebook
Next articleNigerian man, two Brazilians arrested in India with 2.650 litres of liquid cocaine concealed in condoms