May apologises to own MPs for election ‘mess’ 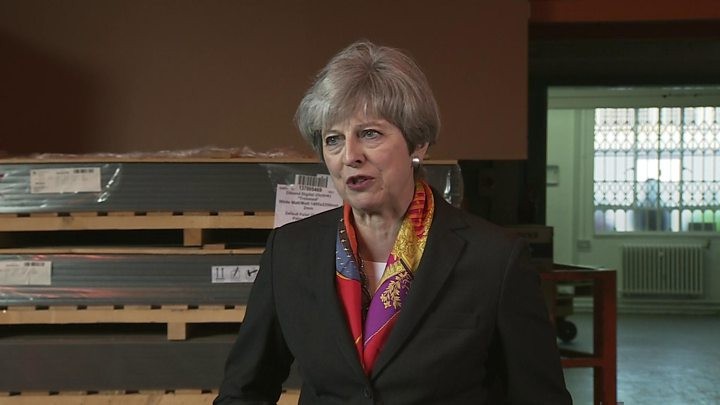 British Prime Minister Theresa May took the blame for the Conservatives’ disastrous performance in last week’s election as she faced her party’s angry MPs on Monday, seeking to ward off any challenge to her leadership.

“I got us into this mess, and I’m going to get us out,” May told Conservatives MPs during a crunch meeting in Westminster.

May’s Conservatives unexpectedly lost their majority in parliament in Thursday’s snap vote, causing political chaos ahead of Brexit talks with the European Union set to start next week and prompting calls — from within her own party — for her resignation.

But one MP present at the meeting said there was no discussion of a leadership contest, adding “she’s won, she’s got to be prime minister”.

The chaos has also weighed on the pound, which has plunged almost two percent since Thursday, and the government may have to delay the announcement of its policy plans to parliament.

May vowed to stay on despite the poor results, and on Sunday unveiled a largely unchanged new cabinet, which met for the first time on Monday.

Foreign minister Boris Johnson, who was reported by British media to be lining up a leadership bid, insisted May should stay.

“The people of Britain have had a bellyful of promises and politicking,” he wrote in The Sun tabloid. “Now is the time for delivery — and Theresa May is the right person to continue that vital work.”

DUP leader Arlene Foster is due to see May on Tuesday for crunch talks, which could force the delay of the government’s presentation of its legislative programme to Parliament by Queen Elizabeth II, due on June 19.

“Obviously until we have that we can’t agree the final details of the Queen’s Speech,” said May’s deputy Damian Green, referring to a an agreement with the DUP.

“The reason for leaving the single market is because we want to take back control of our borders, they’re not compatible,” he told BBC radio.

He also said the government would “walk away” with no deal if talks broke down on ending Britain’s four-decade membership of the European bloc.

But Ruth Davidson, the pro-EU leader of the Conservatives in Scotland, called on May to “reopen” the government’s Brexit plans.

“The idea that the UK led by this prime minister and this government can just blunder into negotiations starting one week today, I just don’t think it’s a credible proposition,” she told reporters in London.

– ‘Dead woman walking’ –
May has a busy schedule on Tuesday, hosting a cabinet meeting and talks with the DUP leader before travelling to Paris to meet French President Emmanuel Macron.

Brexit will likely be on the agenda at the Paris meeting after May confirmed she will stick to the negotiating timetable.

“Going abroad and being seen to be the prime minister and talking to the president of France… is a classic move to shore up authority at home,” said Colin Talbot, professor of government at the University of Manchester.

May tried to reassert her shattered authority at the weekend by announcing her new cabinet — with no changes among her top team.

In a surprise move, Michael Gove was appointed environment and agriculture minister less than a year after the prime minister sacked him as justice minister.

After the opposition Labour party made hefty election gains by focusing heavily on national issues, May listed areas such as education and housing as top policy priorities.

May has shown little public contrition for the electoral gamble that backfired spectacularly but was forced to accept the resignations of her two top aides — reportedly a requirement by cabinet colleagues for allowing her to stay in office.

On Monday, she faced members of the Conservatives’ 1922 Committee, which can trigger a vote of confidence in a party leader if it receives letters from 15 percent of the party’s MPs.

DUP leader Arlene Foster said there had been “positive engagement” so far.

“We are going into these talks with the national interest at heart. The union, as I’ve said before, is our guiding star,” she said.

Defence Secretary Michael Fallon said the government was not looking at a formal coalition but would seek assurances that the DUP would vote with May “on the big things”.

He stressed he did not share their ultra-conservative views on issues such as abortion and homosexuality, which have caused disquiet among many Conservatives.

The deal has also caused consternation in Dublin, with Irish premier Enda Kenny warning such an alliance could upset Northern Ireland’s fragile peace.

London’s neutrality is key to the delicate balance of power in Northern Ireland, which was once plagued by violence over Britain’s control of the province.