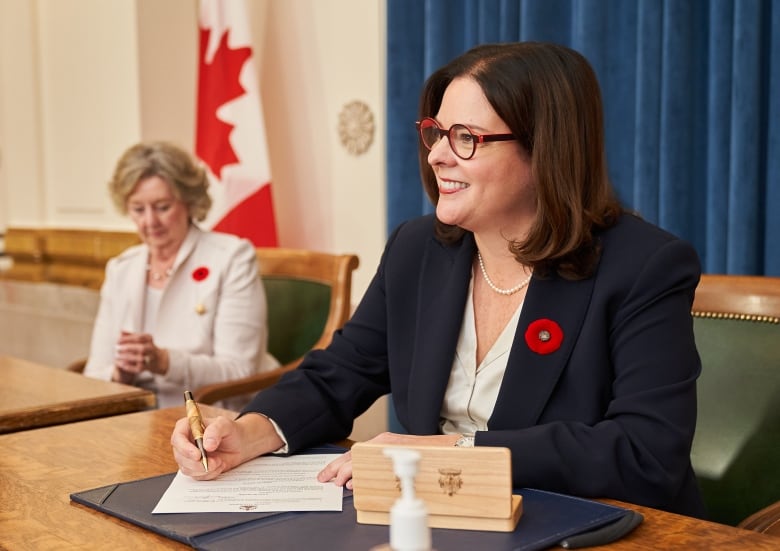 Fearing the long-term damage that could result from a drawn-out leadership dispute, the Manitoba Progressive Conservative Party has agreed to face former candidate Shelly Glover in a courtroom before Christmas.

In court documents filed on Monday, the Progressive Conservative Party of Manitoba has agreed to allow a court to decide whether the party’s Oct. 30 selection of Heather Stefanson as its leader should be declared invalid.

Stefanson won that race by 363 votes and was sworn in as premier on Nov. 3.

Glover did not concede defeat and asked the Manitoba Court of Queen’s Bench to throw out the result — and order up a new election — on the grounds the total vote count fluctuated on election day and that the party failed to secure ballots.

The two sides were slated to argue whether or not the court has jurisdiction over the case on Friday.

In documents filed Monday, the PCs agreed to grant the court jurisdiction over the case instead of arguing Glover should have appealed to the party directly.

Lawyers Neil Duboff, Kaitlyn Lewis and Harley Schacter said “the nature of the allegations” and “the regrettable, divisive tone to the dispute” means the matter is best left to a court to decide.

“This is because in this unique situation, no matter the result of an internal appeals process, there remains the potential for either candidate to later complain (perhaps in a supplementary court process), that the result of the internal appeal process was not the product of an independent, fair and unbiased process,” they argued.

“While the PC Party has confidence that no such grounds would exist, unfounded allegations and drawn-out proceeding would be detrimental for the PC Party to carry out its role and to the long-term reputation of the PC Party.”

The PC lawyers and Glover’s lawyer Dave Hill agreed to “the importance of an expeditious resolution” and intend to ask Justice James Edmond for a hearing on or before Dec. 20.

In a separate brief on Monday, lawyers for Stefanson asked to intervene in in the case.

“Stefanson has a clear and direct interest in the subject matter of these proceedings and has the ability to provide a unique contribution to the proceedings not offered by Glover or the PC Party,” lawyers Jonathan Kroft and Richard Bars said in a brief.

Glover’s lawyer Hill said he consented to the intervention.

During an initial court proceeding on Nov. 4, Kroft said he didn’t believe the court has jurisdiction to review the decision of the Crown to swear in Stefanson on Nov. 2.

“By virtue of the Canadian and Manitoba constitutions, Ms. Stefanson will remain premier until she dies, becomes unable to serve, resigns or loses the confidence of the House,” he said at the time.

A hearing is scheduled for Nov. 19 to determine who will be party to the case.

Stefanson’s office declined to comment because the case is before the courts.