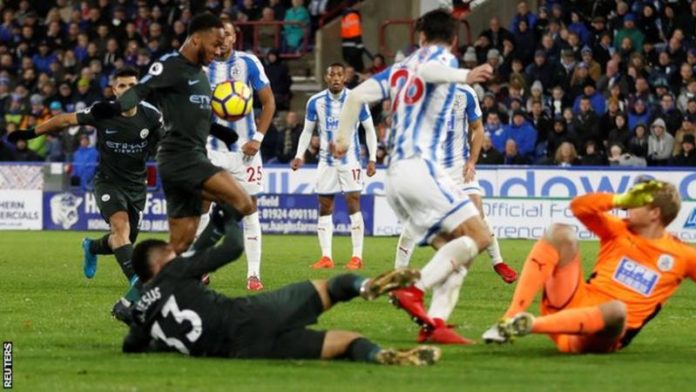 The league leaders equalled a club record – set in 2015 – by securing an 11th successive Premier League victory, despite falling behind through a Nicolas Otamendi own goal.

Sergio Aguero’s penalty early in the second half drew City level, and Raheem Sterling struck the winner with only six minutes to go.

“If you want to win the title you cannot expect easy games,” said Guardiola. “We have to live these kinds of situations and we spoke at half-time about how we are going to react.”

This was the first time City have come from behind at half-time to win a Premier League away match since April 1995.

Victory meant City re-established an eight-point lead over second-placed Manchester United. Since being held 1-1 by Everton on 21 August they have won 18 consecutive games in all competitions.

“The 18 games in a row is amazing, and we have 11 in the Premier League in a row so that’s good. We have a good moment and with the spirit we can go further.”

Defeat – Huddersfield’s second at home in their first Premier League campaign – leaves the Terriers 11th in the table.

City’s total of 37 points after 13 games is a Premier League record – and the last time a team led the top flight by eight or more points at the same stage was in 1993-94. Then, Manchester United were 11 points clear and on course to win their second consecutive title.

Guardiola’s men arrived here with 40 goals from their 12 previous league matches, but they lacked their usual ruthlessness in front goal against resilient hosts.

Home goalkeeper Jonas Lossl denied Aguero on several occasions, while Sane hit the crossbar with a free-kick after his side had drawn level.

The league leaders wore the home side down, making 336 successful passes after the break compared to Huddersfield’s 37, with Sterling’s winner looping agonisingly over Lossl after he had saved from Gabriel Jesus.

Huddersfield were brave and bold at times in front of a passionate home crowd, and defender Mathias Jorgensen went close to opening the scoring from close range in the first half.

Mounie has failed to score since the opening day of the season, and the Benin international only appeared off the bench in the 86th minute against City.

David Wagner’s side face trips to Arsenal and Everton this week and, after Huddersfield failed to manage a shot on target against City, the German will be hoping for more threat in front of goal to end a run of two straight defeats.

What the managers said

Terriers boss David Wagner: “I think the players have done everything to get a draw, they were solid and focused. Unfortunately we were not able to get over the line. Manchester City is a top team.

“I saw everything I wanted to see from my team apart from the loss. The first goal was very good for us and the crowd, who played a huge part. I think it was a penalty to City, it was holding in the box.

“We were then unlucky with the second goal.

“We have played 13 games in the Premier League and have proved we are competitive. I take a lot of positives, it is unfortunate about the result.

On van La Parra’s red card: “I’ve not seen the video, I only hear the barging and gripping in the face. The referee has seen it and decided it was a red card.”

City manager Pep Guardiola: “We spoke at half-time about how to react, we had enough chances to score and the first time Huddersfield had a chance they scored. We spoke about not giving up, to keep going.

“It was a brilliant move to win the penalty.

“It is impossible to win every game easily, this league is so tough. The guys competed amazingly, which is why we won.”

Man of the match – Raheem Sterling

No away-day blues for City – the stats