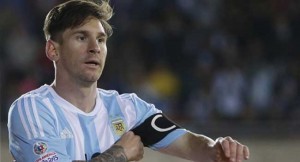 The Argentine hometown of Lionel Messi is bracing for one of the soccer’s biggest nights, the wedding of the Barcelona star to his childhood sweetheart Antonella Roccuzzo Today.

The Argentine city of Rosario is expected to host stars such as Neymar, Shakira and Luis Suarez for the occasion. With local media predicting some 600 guests to attend the event, security is high in the city.

Although Messi now lives in Spain, locals in Rosario have a soft spot for the local boy from humble beginnings who hit the big time in soccer.

A mural is going up in the city to honour the soccer great.

Messi and his wife-to-be Roccuzzo met in Rosario and have been inseparable since. The pair also still have friends in the city that they reportedly keep in regular contact with.

No word on where Messi will spend his honeymoon. He is not due back on the soccer field until August in a World Cup qualifying match for his country.

Argentina have struggled in South American qualifiers and are teetering outside of qualification for the tournament.