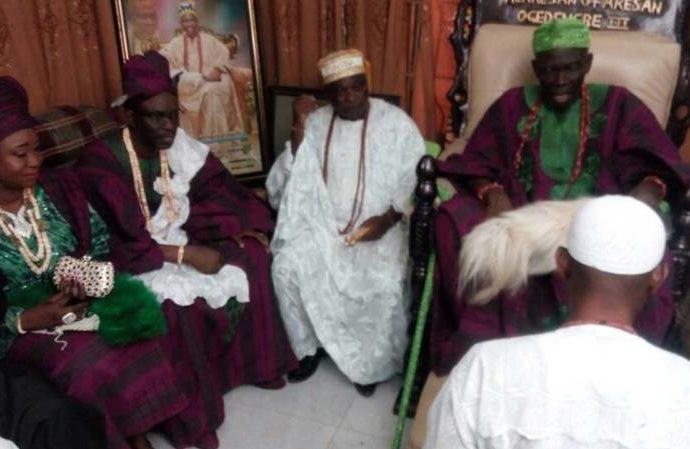 The Vice Chancellor, Lagos State University, LASU, Olanrewaju Fagbohun, on Thursday made a grand entry into the Akesan Palace, three months after his father became king.

The News Agency of Nigeria reports that Gbadewolu Fagbohun, father of the VC, was crowned as the Alakesan of Akesanland in Alimosho Local Government Area of the state on April 22.

In line with the tradition of the town, the VC, being the Aremo (first son) to the king, did not attend the coronation.

He was also not expected to see his father or enter the town until three months after the coronation.

A grand entry was organised by the kingdom to welcome the prince to the land and reunite him with his father, ahead of traditional rites to be performed for him (the Aremo).

Speaking while receiving his son, Mr. Fagbohun said the event was significant and historic in the annals of Akesanland.

The royal father remarked that during the three months of the Aremo in “exile’’, he and every other member of the family, were paying for his safe return.

According to him, there have been incidents, in the past, of evil befalling some princes, who eventually are unable to return to the palace.

He said it was not easy for him not to see his son for three months but tradition must be adhered to.

“But in my own case, here is my son, the Prince is back to the palace, hale and hearty.

“Two weeks to his return, we all became over-anxious and I intensified prayers for his safe return,” the royal father said.

In his own brief remarks, the vice chancellor expressed happiness for arriving into the warm embrace of his father.

“I appreciate everyone for their prayers for this successful return to the palace,” he said.

He also thanked the friends, associates and the people of Akesan for their moral, financial and spiritual support.

NAN reports that in commemorating the event, different traditional rites were performed on the prince.

Prayer was also offered by the king, chiefs and several religious groups.

The best of traditional displays by the ‘Egun’ and ‘Zamgbeto’ masquerades, among others, were showcased.