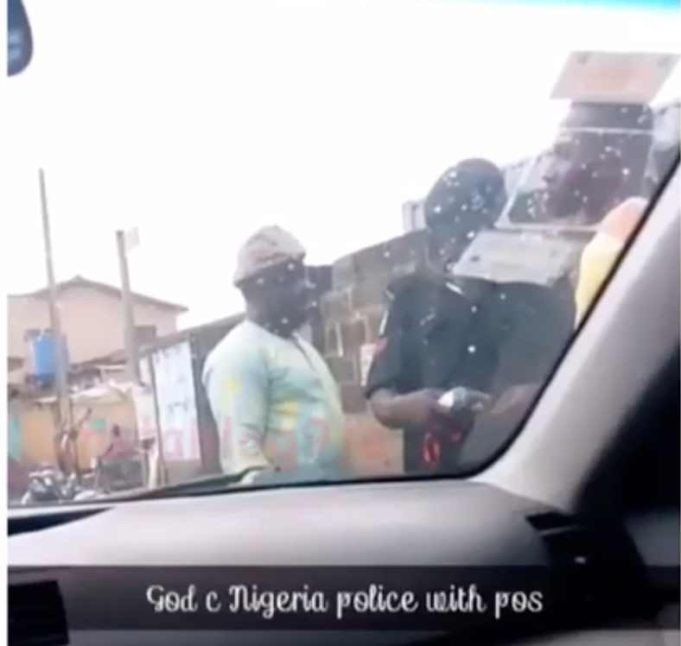 THE Lagos State Police Command on Wednesday cleared a policeman attached to the Makinde Police Division of allegation of extortion.

A seve-second clip  filmed by a female motorist had shown the policeman holding what looked like a Point of Sale terminal.

He was seen taking what appeared like an Automated Teller Machine card from a man who had disembarked a motorcycle.

The woman who was filming the incident from her car was heard in the background accusing the policeman of extortion.

Efforts by our correspondent to speak with the woman were abortive, as the poster of the clip on Instagram said she sought anonymity.

The poster told PUNCH Metro that the witness was in her car when the incident happened.

After the video went viral on the social media, many Nigerians expressed shock and dismay at the attitude of the cop, which they said represented the level of corruption in the Nigeria Police Force.

Our correspondent visited Olowora Street, in the Mafoluku area of Oshodi, where the incident reportedly happened on Tuesday, June 20, 2017. He established the spot of the incident from the video evidence, but no resident owned up to witnessing  the incident.

Instead, the residents, including motorcyclists and traders, lamented that policemen from the Makinde and Akinpelu divisions were notorious for extorting money from commercial motorcyclists in the area.

A trader close to the scene of the incident noted that policemen from the Makinde division sometime stayed at the junction to extort money from motorists and motorcycle riders.

A resident of the area said, “Extortion by policemen is not new here.  There is a woman selling roasted corn down the road. They stay close to her place. But I did not witness the one in the video.”

An executive member of one of the motorcycle riders association in the community, who watched the video, said it was not impossible for the policemen to do such a thing.

He said, “It is a normal occurrence around here. In fact, it happens on a daily basis. Those policemen always stay in that area to stop motorcycle riders and motorists. But I believe the man that was being extorted in that video is not the motorcycle rider. It must be his passenger, who could be a yahoo-yahoo boy (Internet fraudster). When policemen ask them (fraudsters) for money, they give excuses. The excuses may have forced the policeman to devise the method of the POS terminal.

“But for us as motorcycle riders, they collect between N5,000 and N10,000 when they seize our motorcycles. They have told us that we are their ATM. The policemen fond of this are from the Akinpelu and Makinde divisions.”

Another motorcycle rider in the community said cops sometime threatened to take them to the Special Anti-Robbery Squad where they would be detained for robbery.

“We all have been victims at different times. Sometimes, they ask us not to park close to banks or pick more than one passenger. They could say we have been asked to stop using a particular park and they will arrest us and start demanding money,” he added.

A resident listed some of the points of extortion to include Akinniku Street, Bolade Junction and Oshodi Express bus stop.

“There is nobody to call them to order; they just do as they like,” he said.

The state Police Public Relations Officer, Olarinde Famous-Cole, said the command was aware of the video, adding that the policeman involved was arrested and detained.

He said, “The policeman was on a stop-and-search on Tuesday. From what we gathered, he stopped a commercial motorcycle rider who was carrying a passenger with a bag. He asked the passenger what he had in his bag and he stated them.

“The policeman searched the bag and found the POS terminal and other documents. When he asked him what he was doing with the POS, the man claimed he was using it to pay utility bills and that he worked with an electricity distribution company.

“The policeman demanded a proof of identification and he tendered it. The policeman then asked him to go since there was nothing implicating on him. Unknown to all of them, a passerby was filming the scene without their knowledge.

“We arrested the policeman initially. But this morning (Wednesday), we saw the same commercial motorcycle rider and asked him to give an account of what transpired. The  rider gave the same account, saying the policeman did not collect any money from the passenger.”