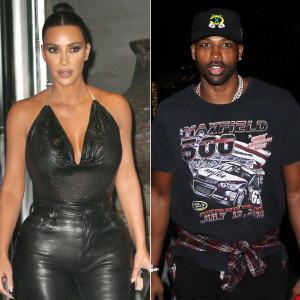 Oh, to be a fly on the wall! Kim Kardashian and Tristan Thompson were spotted at dinner together on Wednesday, September 11, nearly seven months after the athlete’s messy split from Khloé Kardashian.

Khloe Kardashian and Tristan Thompson: The Way They Were

The KKW Beauty founder, 38, and the NBA player, 28, were accompanied by La La Anthony, Jonathan Cheban and Simon Huck at Estiatorio Milos in New York City, an onlooker tells Us Weekly. In photos snapped by a social media user, Kim could be seen seated right next to Thompson.

The reality star wore a sultry black ensemble while Thompson opted for a graphic sweatshirt for the outing. Cameras were on hand to capture the conversation, seemingly for the new season of Keeping Up With the Kardashians.

Khloé ended her relationship with Thompson in February after he was spotted making out with Kylie Jenner’s former BFF Jordyn Woods. The drama came 10 months after the Cleveland Cavaliers power forward made headlines for cheating on the Revenge Body host while she was pregnant with their now-17-month-old daughter, True.

On the last season of KUWTK, Khloé’s split played out in a series of emotional episodes. The season 17 premiere of the hit E! show aired on Sunday, September 8, and showed Khloé and Thompson reunite for True’s first birthday party.

Most Shocking Celebrity Splits of All Time

“This was such a horrible time in my life but time really does heal and help people move on,” the Strong Looks Better Naked author tweeted as she watched the episode. “Thank you for that! That saying ‘that nothing lasts forever’. Not the good, sadly, but happily, not the bad. The good will always come back.”

Despite the sticky situation, the former couple have put their differences aside for the sake of their little girl. “It’s still sometimes awkward, but I think we’re both doing a really good job,” Khloé previously told Us. “I mean, whenever he wants to see her, he can.”