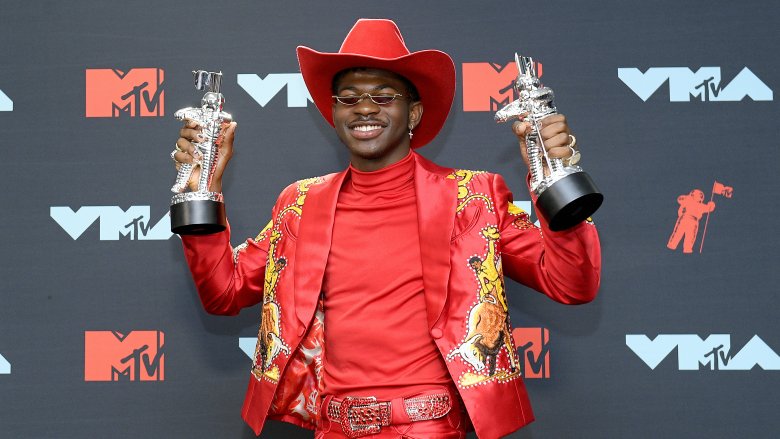 Was there ever any doubt?

Lil Nas X took home the Song of the Year award at the 2019 MTV VMAs for “Old Town Road.” With a late assist from country music star Billy Ray Cyrus, the Internet sensation rode his infectious earworm from TikTok meme all the way to a remixed record-smashing 19 weeks at #1 — and his first-ever VMA.

“It feels amazing, man,” he told MTV News after the ceremony. “There’s no words. My first award.”

Speaking about his rise to fame, the Atlanta-based rapper said, “It’s like, you know when you’re in a dream? Well, you don’t want to wake up because it’s a good one, you know?”

After seven weeks at #1, Lil Nas X gifted Billy Ray Cyrus with a Maserati, but now he says he “might just buy him a ranch full of horses or something.” Lil Nas X revealed that Cyrus gave him “a couple things” as well, but when pressed for specifics he remained mum. But don’t worry, they were “good things, though.”

Lil Nax X is now the first openly LGBTQ+ musician to win Song of The Year at the VMAs after he came out during Pride Month and at the height of his smash hit’s popularity. During an interview with Time, the rapper claimed he was taught at an early age that homosexuality was “never going to be O.K.,” but he felt it was time to live his truth.

“I know the people who listen to this the most, and they’re not accepting of homosexuality,” he said, later explaining that he was “pushed by the universe” to come out publicly. “In June, I’m seeing Pride flags everywhere and seeing couples holding hands — little stuff like that.”

We expect this to be the first of many awards for Lil Nas X, but in the meantime, check on your horses in the back.