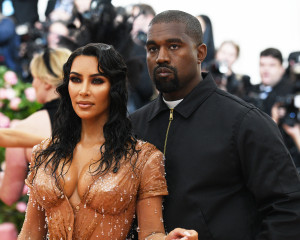 Kim Kardashian revealed that she and hubby Kanye West could possibly move to Wyoming — part-time.

The Keeping up With the Kardashians star, 38, spilled the details while appearing on The Tonight Show Starring Jimmy Fallon on Wednesday, September 11.

Kardashian told Fallon that while it’s West’s “dream” to relocate their four children from Los Angeles to Wyoming, the reality star isn’t as sold on the idea.

Kim Kardashian and Kanye West’s Sweetest Moments With Their Kids

“We love Wyoming. It’s always been such an amazing place,” Kardashian told Fallon. “My husband did just buy a ranch there. His dream and his vision is to move there. I love L.A., so I envision summers, I envision some weekends but yeah, we love it. It’s, like,  the prettiest place you’ve ever seen in your entire life.”

Kardashian and West have reportedly already purchased a $14 million ranch, called Monster Lake Ranch, in Cody, Wyoming, according to TMZ.

West is currently in Cody, Wyoming wrapping up his latest album, which is expected to be released on September 27. He also recorded his last album Ye at his studio in Jackson Hole, Wyoming.

Kardashian also presented West with a cake shaped like the mountains of Wyoming for his 41st birthday.

This isn’t the first time West has attempted to make a big family move. In April, West hoped to move to his hometown of Chicago.

The drama unfolded on the April 7 episode of Keeping Up With the Kardashians, which showed Kardashian flying 1,740 miles from Los Angeles to Chicago on a private jet to confront West about the move.

“I don’t want to uproot them from all of their friends and their routine and their cousins and everything,” Kardashian told West. “I just think that it would be amazing to have a second place in Chicago and if you need to spend more time out there that’s totally fine, but I think it would be really hard just to take the kids and leave and permanently move to Chicago.”

West replied that Chicago “felt like I was home.”

Kardashian called the possible move to Chicago her “breaking point” during a confessional on the E! reality series.

However, Kardashian was, again, willing to compromise on the move for a part-time relocation.

“I mean, I’m willing to split it, I’m just saying during the school year, it’s going to be really hard,” Kardashian told West.