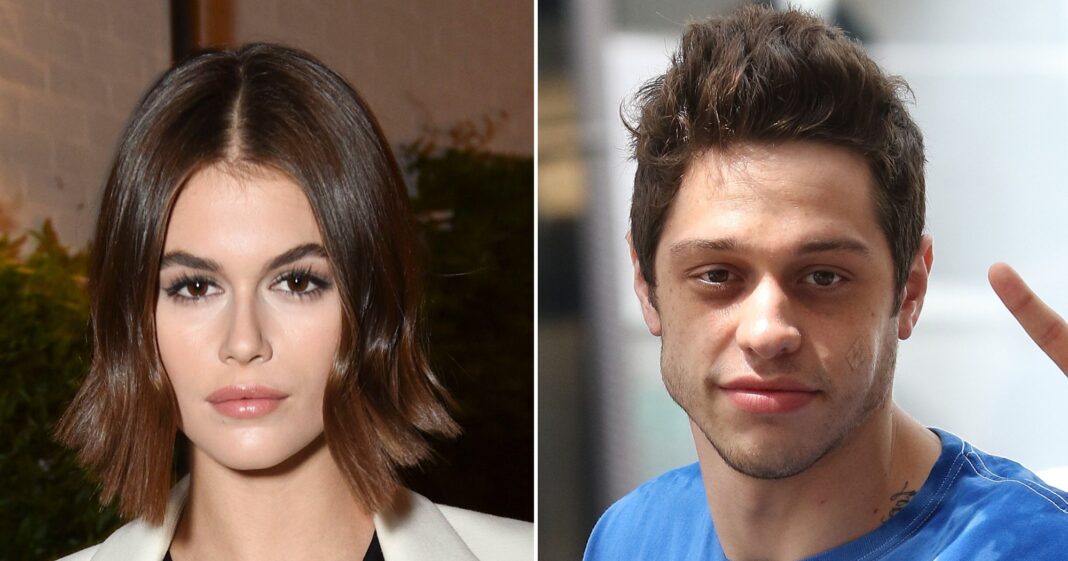 The model, 18, was spotted at Magnolia Bakery in New York City’s West Village with a cake box.

An insider tells Us Weekly exclusively that Gerber ordered a confetti cake with pink frosting that had the words “Happy Birthday, Pete!” written in blue frosting.

After weeks of relationship rumors, Us confirmed on Thursday, November 14, that the pair are officially an item.

“Pete and Kaia are dating and they’ve been trying to keep their relationship somewhat low-profile,” a source told Us exclusively.

The couple were first linked in October after being spotted together on a date in NYC, where an eyewitness saw the pair “laughing together” as they ate lunch in the SoHo neighborhood.

Earlier this month, the pair were spotted driving in L.A. after dining at Nobu, and on Sunday, November 10, Gerber and Davidson were texting each other while she sat in the audience and he was on stage at a Brooklyn comedy show.

Two days later, an eyewitness told Us that the daughter of Cindy Crawford “looked super into” the actor and comedian during an early dinner date at Sugarfish in NYC.

“She kept reaching out to touch his hands,” the onlooker told Us. “They were whispering to each other the whole time.”

Davidson was spotted with Gerber weeks after splitting from Once Upon a Time in Hollywood actress Margaret Qualley. Us broke the news that they broke up in October, after two months of dating.

The Trainwreck star dated Kate Beckinsale for a few months earlier this year after they were spotted together at a Golden Globes afterparty in January. His four-month-long engagement to Ariana Grande ended in October 2018.

Davidson joked about his high-profile exes during the November 2 episode of SNL. He offered to answer questions about himself during Kristen Stewart’s monologue, declaring that he would be “an open book.” The Charlie’s Angels star, 29, replied, “The thing is, I just think it’s, like, all pretty much out there.”