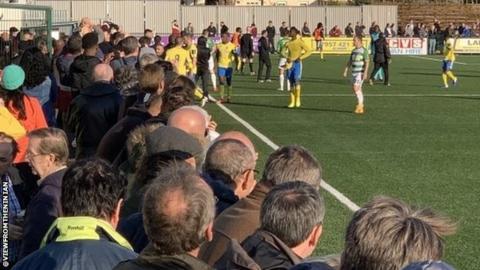 Football News: Police say they are investigating after an FA Cup match between Haringey Borough and Yeovil Town was abandoned amid reports of racial abuse by fans.

Officers are also investigating after items were reportedly thrown onto the playing area, a Metropolitan Police spokesperson told BBC Sport.

Saturday’s match was abandoned after Haringey’s manager took his team off the field in the second half.

There have been no arrests yet and inquiries are continuing.

The match, played at Haringey’s Coles Park Stadium, was in the fourth qualifying round of the FA Cup, with the winner set to progress to the first round proper.

Haringey goalkeeper Valery Douglas Pajetat was reportedly spat at and hit by an object thrown from the Yeovil Town end.

Defender Coby Rowe was then “racially abused”, according to Haringey boss Tom Loizou, who said “there was no way I could let him continue”.

Avon and Somerset Police says it will be assisting the Met, and have asked anyone with information or video footage to contact them.

The Football Association is also investigating and said it was “deeply concerned” about the allegations.

“There is no room for discrimination in our game and we are working with the match officials and the relevant authorities, as a matter of urgency, to fully establish the facts and take the appropriate steps,” said an FA statement.

The incident came four days after England’s Euro 2020 qualifier in Bulgaria was halted twice as fans were warned about racist behavior, including Nazi salutes and monkey chanting.

Haringey plays in the Isthmian League Premier Division and Yeovil are in the National League.

“It’s very distressing,” Loizou told BBC Radio 5 Live. “The abuse a few of my players got was disgusting.

“Yeovil’s players and manager were in a different class. Their team tried to calm their supporters down, they tried their best and they supported us – they said ‘if you’re walking off, we’re walking off with you’.

“I took the decision to take my team off and I don’t want Yeovil Town to get punished for it. If we get thrown out of the FA Cup and they go through, there are no hard feelings there.

“I have not done it for any other reason than looking into my players’ faces and seeing how distraught they were. They are not used to this.”

What happened at Haringey v Yeovil?

Visitors Yeovil were leading 1-0 through a Rhys Murphy penalty when the game was halted in the 64th minute.

There was a long delay for that spot-kick to be taken, with Haringey keeper Pajetat reportedly initially struck by an object from the stands.

Shortly after Murphy scored, play was suspended as the hosts left the field. About 35 minutes later, it was confirmed the match had officially been abandoned.

“It must be said that 99.9% of [Yeovil] fans are also disgusted by what’s happened as much as we are. One club, one community.”

In a statement, Yeovil said the club “will not accept racism or discrimination in any form” and that they will “be cooperating with the authorities and our friends at Haringey”.

‘The boys were disgusted’

Former Haringey left-back Michael O’Donoghue was at the game and went into the dressing room with the team when they came off.

The 23-year-old, who played for Borough for three and a half years before leaving last season to join Concord Rangers, told the PA news agency: “As soon as they scored it was starting to kick off again and you could see the Haringey players were getting abused and felt unsettled.

“The referee was seen removing the bottles thrown at the players and then the managers of both teams went on and escorted their teams off the pitch.

“I went into the changing room with the boys, the referee called in both captains and managers to have a talk about what to do next. The boys made a group decision to make a stand and not go back out to play.

“The officials and Yeovil manager came into the Haringey changing room and said they will back whatever decision the Haringey boys made, so that was class from them.

“The boys were disgusted and you could see a few were distraught from getting abused like that.”

“The players and I decided we’d support [Haringey] and make a stand together, and be stronger with togetherness.

“My head is in an absolute spin. I’ve gone through a situation I never hoped I’d go through.

“We, footballers and managers, get a lot of abuse but nobody should feel discriminated against when they come to play football.

“I feel we’ve done the right thing. I’m not going to feel anything other than proud of the way the players conducted themselves.

England and Aston Villa defender Tyrone Mings, who was racially abused in Bulgaria on Tuesday, praised Haringey’s response and said: “Our country isn’t perfect either.”

The campaign group Kick It Out said in a statement: “These reports of alleged racist abuse aimed at goalkeeper Valery Douglas Pajetat yet again means players are continuing to receive discriminatory abuse while doing their job.

“The Haringey manager and players took swift and decisive action as a result of the abuse, similar to that taken by the England team out in Bulgaria.

“Kick It Out has informed the FA and will support the club in identifying the offender(s) to ensure appropriate action is taken and strong punishment issued.

“We would also like to offer our full support to Douglas and all at Haringey Borough FC.”