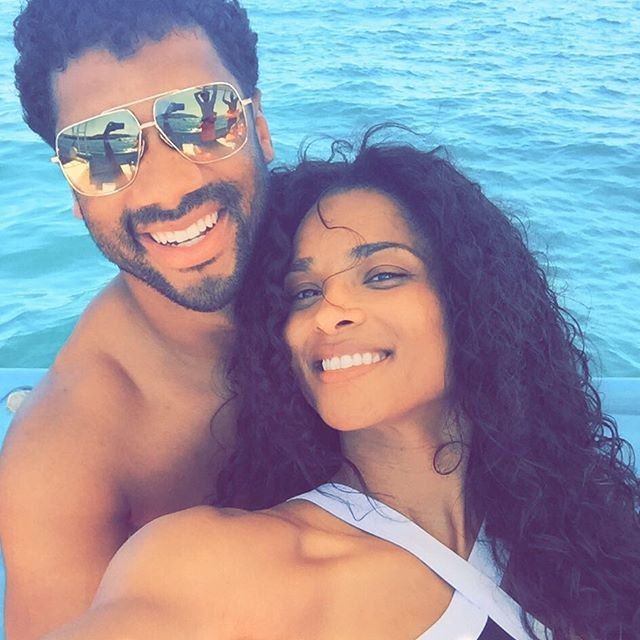 One year after Ciara and Russell Wilson‘s fairytale wedding in England, the two are still all about the passion as they celebrate their anniversary with some seriously romantic gestures during their vacation to Mexico. Of course, it was definitely still a family affair as the couple brought along their daughter Sienna and Ciara’s son Future from a previous relationship.

On Sunday, Ciara took to Instagram to post a sumptuous photo of a dreamy white bed covered with red rose petals, even spelling out “R + C.”

Along with the enviable image, the singer wrote, “I tried to plan things for the day, but he wouldn’t let me.’Twas A Perfect Day. The simple things are the sweetest…@DangeRussWilson #1yearAnniversary.”

The couple’s anniversary was July 6, but there appears to be a multitude of lavish celebrations.

On Thursday, the day of their actual anniversary, the singer posted an Instagram image showing a gift she got her Seattle Seahawks hubby, which was an airplane dragging a banner wishing the couple a happy anniversary.

Along with the image, Ciara wrote, “HAPPY 1 YEAR BABY! YAY! I [Heart] U!…I’m Grateful to God for the Love he has given me, by putting you in my life. I have all that I need. Truly 1 of the Best years of my life.”

The proud wife and mother of two also posted a video in which the family of four looks at her high-flying gift over their balcony. The video shows the whole clan as they excitedly watch the well-wishing plane as it flies by them.

The beaches of Mexico were quite a different sight from their wedding in the English countryside.

E! News previously reported two had a very traditional and “heartfelt” ceremony, filled with flowers and clean, classic decor. A pastor said some “enlightening” words, incorporating their love of faith and God into the nuptials. The happy couple also took a moment to share words from their heart with one another, while a few personal speeches were mixed in throughout.