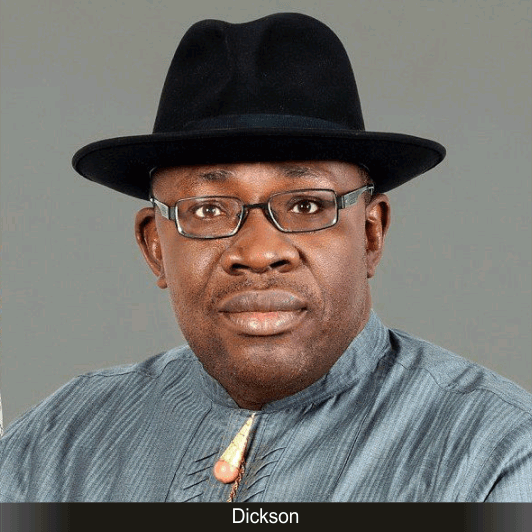 The Governor of Bayelsa State, Mr. Seriake Dickson, has called on the founding Secretary of Ijaw National Congress, Pastor Power Aginighan, to stop trading blame and join forces with other Ijaw leaders to move the Ijaw nation forward.

The governor, who spoke through his Chief Press Secretary, Mr. Daniel Iworiso-Markson, was replying to allegations made by Aginighan that he (Dickson) was responsible for the crisis rocking the INC.

Aginighan, a former Managing Director of the Niger Delta Development Commission, had reportedly pointed out that Dickson was aware when the disagreement in the INC degenerated into a situation where two presidents emerged from the group but failed to act.

He also claimed that Dickson performed below the expectation of many Ijaw nationalists in his handling of the crisis in the apex Ijaw body.

He had argued, “He (Dickson) was aware when the seed of discord which blossomed into the most embarrassing tale of two INC presidents was sown early in 2015 but neglected to act.

”Every sitting governor of Bayelsa State will continue to be a rallying point in the development of the Ijaw strategic agenda.”

But Iworiso-Markson carpeted Aginighan, saying he appeared not to have a grasp of what the matters really were.
He said that Dickson, as an Ijaw patriot, constituted a 20-member Ijaw National Reconciliation Committee made up of eminent Ijaw leaders to mediate in the crisis rocking the INC.

Iworiso-Markson stated, ”The governor is a peace mediator. INC is a socio-cultural body; INC is not an arm of government. The Governor’s intervention is because, by virtue of his position as governor of Bayelsa State, Governor of Ijaw people and of the Ijaw nation, he feels that as brothers, we should not be fighting one another.

”He decided to intervene to bring all feuding parties together and the only way he could do that was to set up such a committee with a high caliber of members. Pastor Aginighan should look at the caliber of members on that committee.

”They represent the creme of the leadership of Ijaw people across this nation. And in the governor’s wisdom, you can’t have such creme of leaders put together by him to bring about reconciliation and at the end of the day, there won’t be peace.