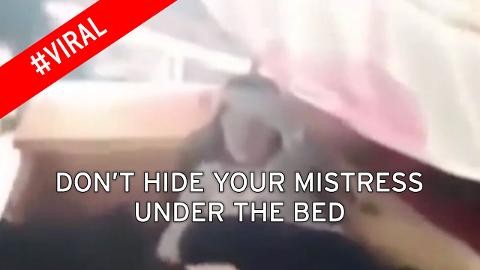 A cheating wife was left red-faced when her in-laws stormed her flat to find her lover hiding under the bed.

The woman, only known as Mayra, was apparently ambushed by her mother-in-law and her husband’s relatives while she was home alone with the man.

Dramatic footage captured in Becerril, Colombia, shows a nervous Mayra as she lets her in-laws into the flat and asks them: “Why did you not call me? And why do you want to come in now?”

But her husband’s suspicious mum, her father-in-law and one of her sisters-in-law pushed past her and began searching the home.

As she records the scene on her smartphone, the mum-in-law marched from room to room asking: “Where do you have him?”

And when she got to the bedroom, she pushed the bed to one side and Mayra’s lover emerged from underneath.

But as he climbed free, the mum-in-law began battering him furiously while Mayra grappled with her sister-in-law.

Then as she bundled the shame-faced couple out of the home, she told Mayra the marriage with her son was over.

The mum-in-law can be heard shouting: “My son does not deserve that. Now, you go with him. You should leave the house, Mayra.”

The bizarre showdown has gone viral since it was posted to social media with hundreds of thousands of views, Mirror notes.