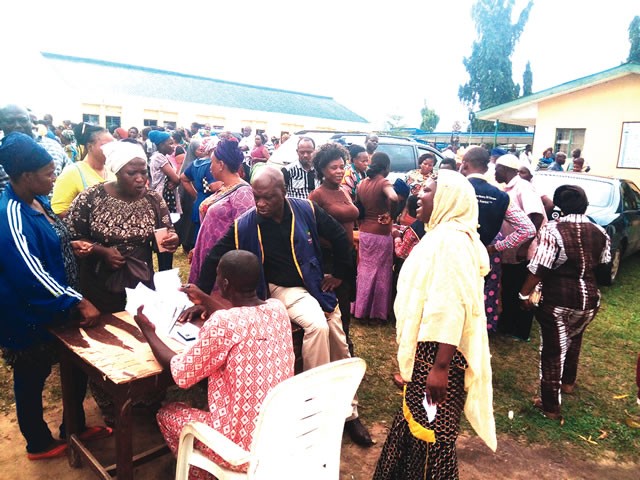 This came seven months after four pupils and two members of staff of the college were kidnapped in October 2016.

It was learnt that the gunmen gained entry into the school premises around 6am on Thursday through the creek at the back of the college.

They were said to have pulled down the school fence and headed for the boys’ hostel, seizing 10 Senior Secondary School pupils.

Our correspondent was told that four of the pupils were later released at the waterside by the assailants after profiling their parents’ details.

PUNCH Metro learnt that the gunmen had shot into the air around 8pm on Wednesday while the pupils were having a prep, but went back after policemen and soldiers fired back.

They struck after the operatives had left the school in the dawn.

A Senior Secondary School 2 pupil, who gave his name only as Daniel, said he was having his bath when the gunmen stormed the premises.

He said, “A friend saw two of them through the window and rushed to tell me that kidnappers had come again. Immediately we raised the alarm, they entered into our hostel, broke the doors and started dragged some pupils out. I hid in the bathroom.”

Another pupil, who did not want his name in print, said, the gunmen took their time to carry out the operation.

“Two of them broke down our doors and told us to lie down. They didn’t use masks and one of them wore a police uniform. They asked if we had phones, but we said no. After picking some pupils, they packed some of our belongings, including sandals. Isiaq (Rahmon) resisted following them until they slapped him.

“While we were doing our homeworks on Wednesday, they shot into the air, but our teachers told us not to panic. They left because policemen and military men were on the ground,” he added.

A Junior Secondary School 2 pupil, who was ill and admitted to the school’s sickbay said, “When they came, they were shooting. I jumped from my sickbed and hid under the bed. Everybody was scared.”

Our correspondent observed as parents thronged the school to pick their children, ignoring the school authorities’ assurance that the pupils were safe.

Some parents of the abducted pupils were inconsolable as they broke down in tears. 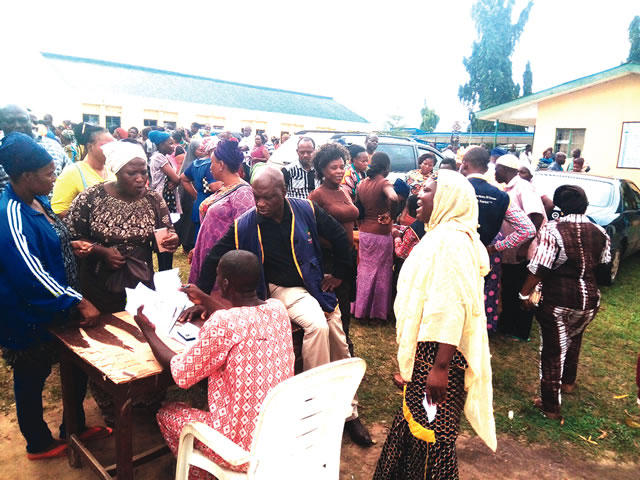 Some parents at the school Photo: Afeez Hanafi

One of them, Maruf Rahmon, said he was at work when his wife, Ikamat, called him that Isiaq had been abducted.

He said, “I have three children here; Isiaq is one of them. The school authorities had a meeting with us this afternoon (Thursday). We were told at the meeting that the kidnappers had written the school three days ago that they were coming. But they didn’t inform parents. I would have come to pick my children.”

Distraught Ikamat appealed to the government to ensure the release of the pupils on time.

Another affected parent, Isiaq Yusuf, said, “I am sad. Faruq (Yusuf) is in SSS1. I want to see my son. The school authorities are telling us to be patient, but a child is not a goat.”

Mrs. Riskat Odunukan, whose child, Jubril ­– a SSS1 pupil – was freed by the kidnapper, decried the poor security in the college.

She lamented that the school had not implemented any of the security measures recommended by parents after the October 2016 incident.

Riskat said, “ There should be total demolition and reconstruction of the fence and it should be high. Bushes in the school’s surroundings should be cleared and there should be a police post around the creeks with Armoured Personnel Carriers.

“Jubril said those kidnappers asked him about his parents’ details and he told them that his father was late. He said they also asked if he knew my phone number, but he said no and they asked him to go.

“The school did not call us; we read the news on the parents’ platform. I thought I was daydreaming. I called some teachers to confirm, but their lines did not go through.

“When the last year incident happened, we advised the school to mount Closed Circuit  Television Cameras and clear the bushes. Nothing has been done. The so called tricycles they bought for the school security men are not being used to patrol the surroundings. The kidnappers capitalised on those lapses.”

Our correspondent gathered that a child, who told the kidnappers that his father was a pilot, was among those taken away.

“The kidnappers came when military men guarding the school had gone. They took 10 pupils, but released four after profiling them. I think they took away those whose parents are rich,” another parent, Alhaja Amirat Alamorieda, said.

A driver and resident of the community, who spoke on condition of anonymity, said the abdutors had been on the waterways since Monday.

The school authorities, including the permanent secretary in the state’s Ministry of Education, declined comments on the incident when approached by our correspondent.

However, the member of the House of Assembly representing Epe Constituency II, Mr. Segun Olulade, said the government would ensure the release of the pupils, adding that the school would be shut till Monday.

“The government is making efforts in terms of security. The incident is unfortunate. Parents who want to take their children home are allowed because of their emotional state. There is a mid-term break on Thursday and Friday. So, the school will resume by Monday,” he added.

Security men were the only people on the school premises as of 6pm when our correspondent left the college.

The statement read, “Today (Thursday), at about 5am, kidnappers gained entrance into Igbonla Model School and abducted six pupils. Investigation and rescue operation have commenced with the visit to the affected school by a police team, led by the Commissioner of Police, Lagos State.

“From the visit, it was found that the criminal elements used the Imeru/Iji waterways to access the swampy forest bordering the school and bore a hole on a part of the school fence to gain entrance.”

Meanwhile, the representative of the Lagos East Senatorial District, Senator Gbenga Ashafa, decried the kidnap in a statement.

“I am aware that the Lagos State Government, ably led by Governor Akinwunmi Ambode, is working with security agencies to ensure that the students are recovered safely in record time.

“I urge the residents of Epe and the staff and students of Lagos State Model Secondary School in Igbonla, to remain security conscious while assisting the security agencies with relevant information that will assist in the recovery effort. I also urge the parents of the other students who are currently in school not to panic,” the statement read in part.