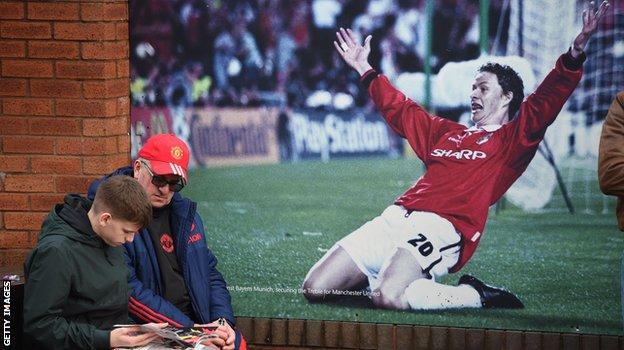 Football News: Ole Gunnar Solskjaer got off to a flying start as Manchester United manager with just one defeat from his first 17 matches after temporarily replacing Jose Mourinho in December 2018.

Those few months included an improbable Champions League win at Paris St-Germain and a surge in support for the Norwegian, with many pundits saying United had little choice but to give their former player the job.

Since his permanent appointment in March though, a total of just 14 points from 15 games is better only than Southampton, Brighton and Watford of the teams who have been in the Premier League for his whole tenure so far.

United are enduring their worst start to a season in 30 years and are winless away from home in eight matches – while Solskjaer’s win ratio now is 47.5%, lower than any United manager since 1981.

The Norwegian will always hold a special place in the hearts of Manchester United fans for the 11 years he spent at the club as a player, a spell that included scoring the winning goal in the 1999 Champions League final.

But as United entertain Premier League leaders and bitter rivals Liverpool on Sunday – the team who brought about the end of Mourinho’s reign with a 3-1 win – should United stick with Solskjaer? And should he still be in charge after the Liverpool game?

We asked four supporters what they think.

You can also have your say by voting below.

‘He should stay – but there are caveats’

Barker: He should still be in charge after Liverpool but there are caveats. I think a lot of United fans feel he is not the right man for the job. He is not getting as much out of this poor quality squad as he should do. Even if he has a vision for the future, you end up running down a slippery slope where poor results lead to even poorer results and he may not be able to turn it around in time.

He has a three-year plan. It still needs to be backed up by owners the Glazers and [executive vice-chairman] Ed Woodward in the transfer market but I do not think he will make it through the three years. The best-case scenario – if he can survive through to next week – is to deliver a slightly better squad which is ready for the next manager to take over.

As Alan Shearer said, it is the worst United squad in 30 years and we will finish in the worst league position in 30 years as a result of that. It all flows from the top down.

It is clear to see how elite clubs across Europe structure themselves for success, so why do Manchester United think they can have a different system?

‘If United lose, perhaps a swift exit would be best’

Lehnert: If Liverpool inflict a heavy defeat on United this weekend, then it is not outside the realms of possibility that Solskjaer will not keep his job. It has been a turgid start to this season, and a dispiriting loss at home to our biggest rivals would gift the board a perfect opportunity to fire the Norwegian should they be looking for one.

More than any of United’s post-Ferguson managers, Solskjaer is working with the backing of fans that understand the constraints that he is operating under. His line of credit from his time as a player is unending, but as a manager, there has been precious little since that fateful March night when they beat Paris St-Germain to suggest that he can lead this team into a halcyon future.

If this awful run of form continues with a disheartening defeat on Sunday, that will leave United hovering over the relegation zone, and then perhaps a swift exit would be best for all involved.

Laher: We can’t keep sacking managers because every time we do we have to get rid of all the players they don’t want and spend a fortune to get in the players the new manager wants. What if we sack Ole and then his replacement doesn’t like Harry Maguire and Aaron Wan-Bissaka?

Solskjaer looks like he has got a plan to build a team mainly made up of young British players. He should be given time to do that and the board need to come out and say he has their full support and explain that they understand that this process may take quite a few seasons.

Someone with experience in dealing with football transfers and contracts needs to be appointed to ensure we get the players we want in at the right prices. We also need to appoint a director of football who sets the philosophy for how United play, identifies the players needed to implement that philosophy and make sure the manager’s style fits with that philosophy.

‘He is out of his depth’

Thompson: Sadly, I think Solskjaer is out of his depth. He will always be a legend in my eyes and he is trying to do the best job he can. But you can see he is tactically naive and his substitutions are not great.

But if you get rid of him, who do you bring in?

United need a proper plan. They need a sporting department alongside the commercial department. The damning thing is that if we finished in the top four last season, then Woodward would have had his most successful season. The objectives were reaching the top four and quarter-finals of the Champions League and we were just a couple of points away from doing it. How sad is that?