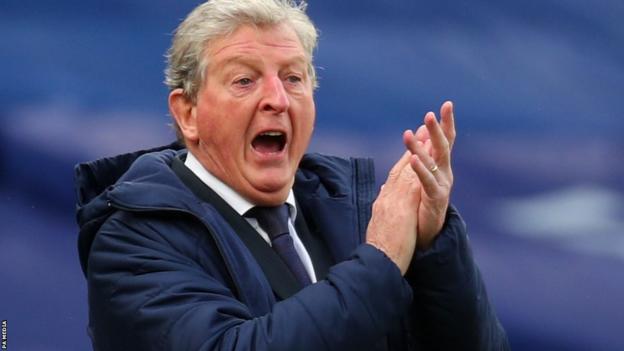 Manager Roy Hodgson will leave Crystal Palace when his contract expires at the end of the season.

The 73-year-old former England boss said: “The time is right to step away from the rigors of top-flight Premier League football.”

Hodgson has been in charge of the Palace since September 2017.

Asked whether he was retiring, Hodgson said: “One never knows. It is a dangerous thing to do when you still feel good about yourself making bold statements about retirement.

“I am certainly not leaving Crystal Palace with the idea of putting myself back on the market for another job.

“I really am stepping away from football for a while, but who knows what the future will be? It is a never-say-never moment.

“I’ve seen so many people retire with all the fanfare blazing, only to surface again somewhere in a fairly short period of time. I’d prefer not to do that.

“I am looking forward to spending a little bit more time with my wife and son and maybe listening to what they want to do for once because it hasn’t happened very much in the last 50 years.”

Hodgson, who began his playing career at Palace and supported them as a child, replaced Frank de Boer as a manager with the club bottom of the Premier League, having lost their first four matches of the 2017-18 season without scoring a goal.

Despite losing his first three games in charge, he guided Palace to 11th in the table. They finished 12th and 14th in subsequent seasons and are currently 13th with two games remaining.

Palace chairman Steve Parish said: “It has been an absolute privilege and pleasure to work alongside Roy, who is both a magnificent human and an outstanding football manager.

“I know how much it has meant to Roy managing the club he supported as a child, adding to his distinguished and unparalleled career in football management.

“His record with us cannot be overstated – he is the only Palace manager to secure four years in the Premier League, and he has helped give us stability in the most turbulent of times.

“We will be forever grateful for his immense contribution.”

Hodgson, who is the oldest person to manage in the Premier League, began his managerial career 45 years ago with Swedish side Halmstads.

He has managed 16 teams in eight countries, including Inter Milan and Udinese, Switzerland, United Arab Emirates, and Finland’s national sides.

He has also been in charge of Blackburn, Liverpool, West Brom, and Fulham in the Premier League, guiding the Cottagers to the Europa League final in 2010.

He took the England job shortly before Euro 2012 and led them to the quarter-finals, but two years later, they were knocked out at the group stage of a World Cup for the first time since 1958.

Hodgson’s England won all 10 matches in qualifying for Euro 2016, but he stepped down after a 2-1 last-16 defeat by Iceland left him with a record of three victories from 11 games in major tournaments.

‘An absolute legend’ – the tributes

Several Premier League managers have been paying tribute to Hodgson in their pre-match news conferences.

Arsenal boss Mikel Arteta said: “He’s an absolute legend. What he’s done for football, for English football, what he transmits as a manager, and what he has done at different clubs is remarkable.

“He has been doing it for so long with the way he is always conducting himself. It’s a great example for me as a young coach. He is someone I admire.”

Liverpool manager Jurgen Klopp described Hodgson as “one of the very, very greats of our business,” adding: “I knew about him long before I met him, and he is a really nice guy. I couldn’t have more respect for him and what he has done.”

Everton manager Carlo Ancelotti said: “Roy is a good friend. He has had a fantastic career. In Italy, they have good memories of him.

“He has helped football to be better, and he also taught a lot of managers how to behave on and off the pitch.”

Hodgson’s replacement will have an ‘impossible job.’

“You have to look at the job Roy has done there – they have always stayed up pretty comfortably,” said Sutton.

“He is not everybody’s cup of tea because of the brand of football, but in terms of doing a job and keeping owners happy, he is the perfect fit.

“The squad will need a big overhaul with so many players out of contract.”

Former Australia goalkeeper Mark Schwarzer, who played under Hodgson at Fulham, told 5 Live: “When you look at his time, especially at Inter Milan, the Italians were renowned for having that defensive system, being very rigid, very organized – and Roy loved that.

“When we started that at Fulham, players were pulling their hair out because the training sessions were monotonous.

“It wasn’t until about two or three months into that time that players started to realize – the penny dropped – this is just building an incredibly stable foundation, one to build upon, to have that flexibility in the final third.

“I’m sure the Crystal Palace fans who will be in the stadium on Wednesday will show their appreciation. The players and the staff all speak incredibly highly of Roy Hodgson.”

In January, Frank Lampard sacked as Chelsea boss is the early bookmakers’ favorite to succeed Hodgson.