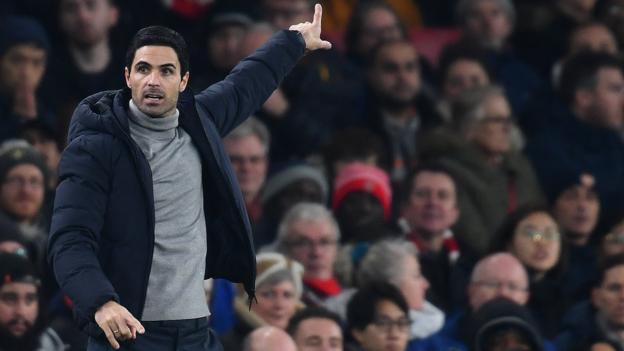 The Gunners are 10th in the Premier League, nine points behind fourth-placed Chelsea.

Spaniard Arteta took over last month and has won two, drawn one and lost one of his four matches in charge.

“If we can find something to help us go through the season in a more balanced way in certain areas, we’ll look at the options,” Arteta said.

“I’m expecting big things from the players I have at the moment, the players that are recovering from injuries. That’s the biggest expectations from my side.

“We always have to be looking because obviously we have some bad injuries for players who are going to be out for a long time.

“We have to see if we can find options there.”

Defender Calum Chambers has been ruled out for up to nine months after rupturing the anterior cruciate ligament in his left knee, while left-back Tierney is out until March after suffering a dislocated shoulder.

Areta wants Aubameyang to stay but contract talks yet to start

The 37-year-old also said talks over a new contract for captain and top scorer Pierre-Emerick Aubameyang will not begin until the summer.

The Gabon striker’s current deal runs out at the end of next season and he has been linked with a move away.

However, Aubameyang said in his programme notes before Monday’s FA Cup win over Leeds that he was “committed” to the club and “desperate to bring it back to the top”.

Arteta said he was “thrilled” to read those comments.

“My intention is to keep Auba obviously, because I know that if we keep Auba with us, we’re going to be stronger and closer to winning football matches.

“That’s the only thing.

“But at the moment we’re in the middle of the season and we haven’t discussed anything further on [a new contract] at the club.”