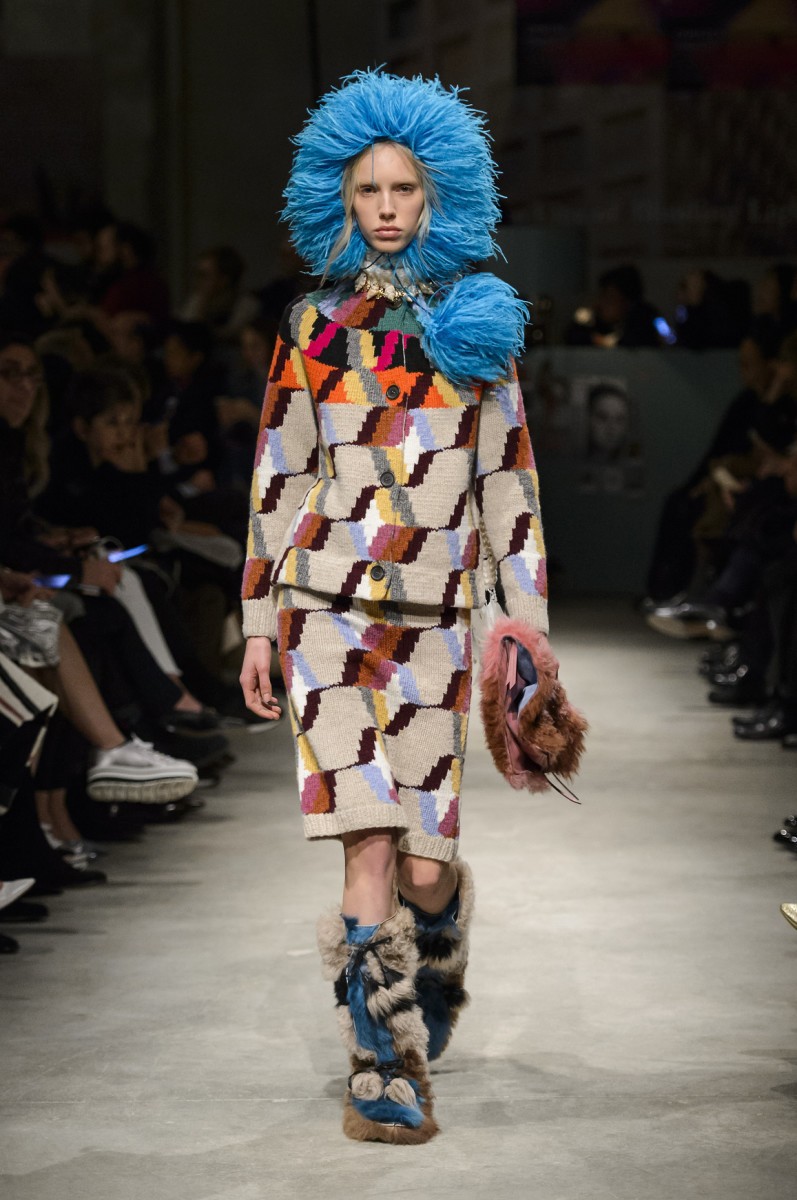 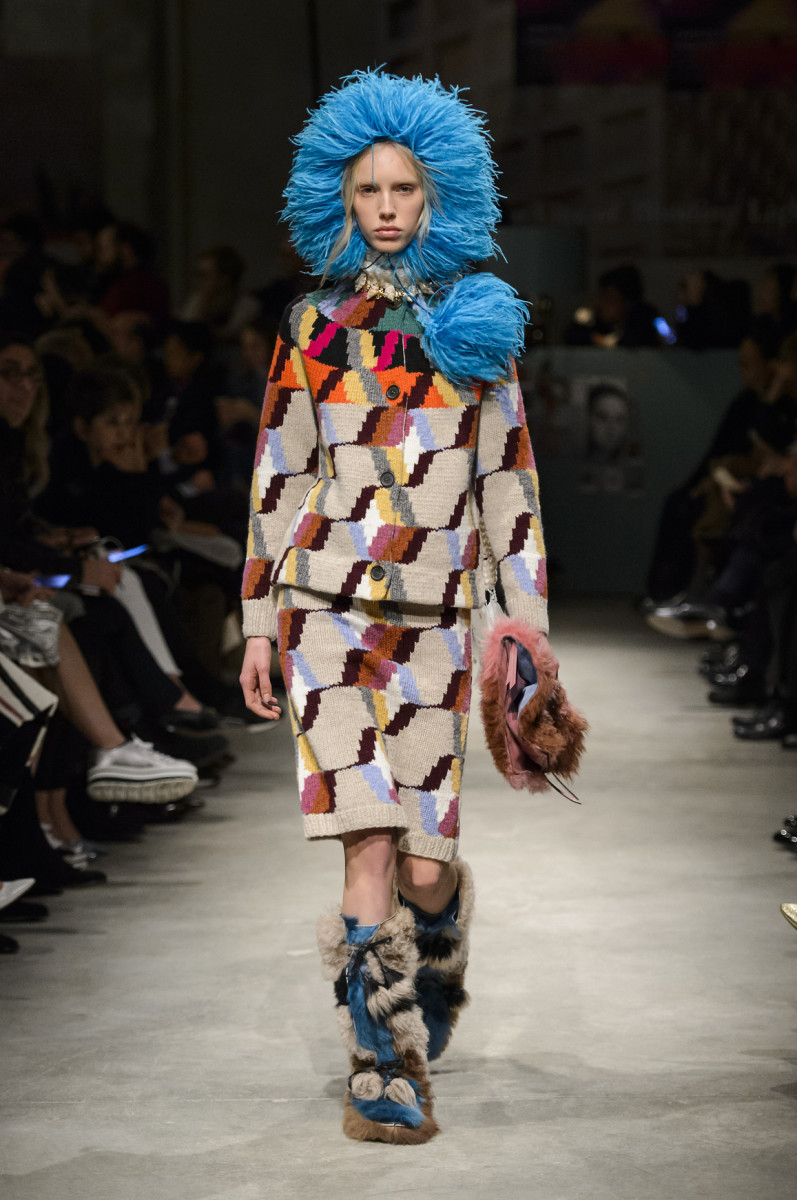 To say that stylists, editors and/or fashion directors fight each other tooth and nail to secure the most statement-making, eye-catching and generally buzzed-about pieces off the runways for their covers each season before a competing magazine does might be a bit of an exaggeration, but to some degree, the struggle to snag one of these hero items is real. Sure, there may be some advertiser pressure at play to feature certain brands on the front of a glossy, but when it comes to heavy-hitting issues like September and March, dramatic, striking looks — paired with just the right cover star — are of upmost importance.

In the recent past, we’ve seen Gucci’s trompe l’oeil embroidered dresses, Prada’s pastel neoprene pieces from the Fall 2015 collection, Maria Grazia Chiuri’s youthful wares for the new Dior and both Céline and Balenciaga’s neon pieces show up on a slew of separate covers over the course of a season — and for fall, it seems that editors have found their latest fixation. Miuccia Prada was big into headwear for both Miu Miu and Prada‘s Fall 2017 runway shows, and while the ostrich feathered hoods or fuzzy, hip hop-inspired newsboy caps might not trickle down to the mainstream, they’ve made their way into more editorials than we can keep track of. In fact, the bright blue Prada hat alone has appeared on five covers thus far, which is quite the feat. Let’s run this down, shall we?

Model Daphne Groeneveld looks coy on the August cover of Harper’s Bazaar Spain, and we must say that the feathered cap is a lovely complement to her blue eyes. 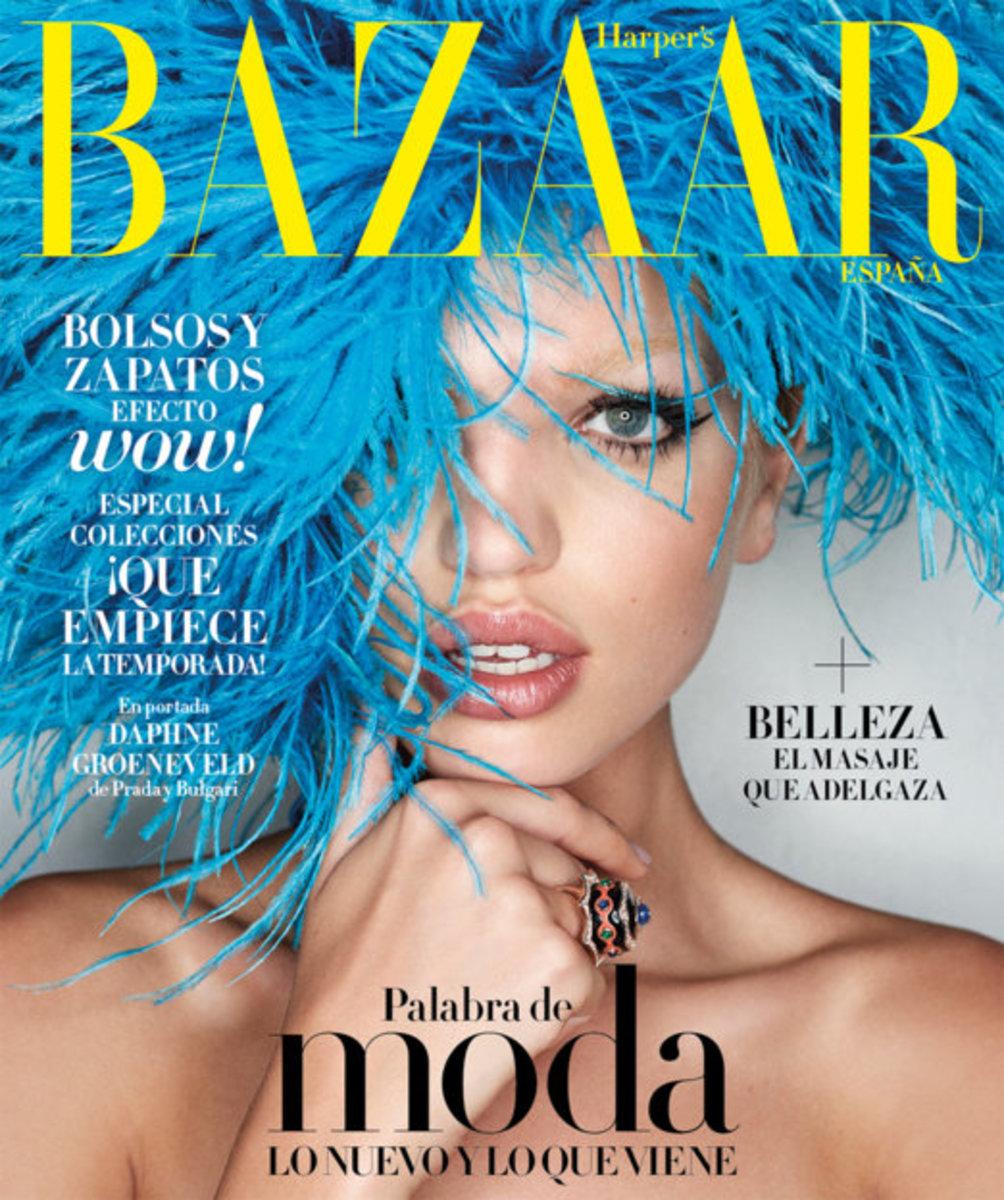 For the cover of Elle UK’s August 2017 issue, stylist Anne-Marie Curtis kept it in the Prada family, pairing the hat with two colorful knits from the same collection. I think fashion may have found the cure to seasonal affective disorder with these looks. 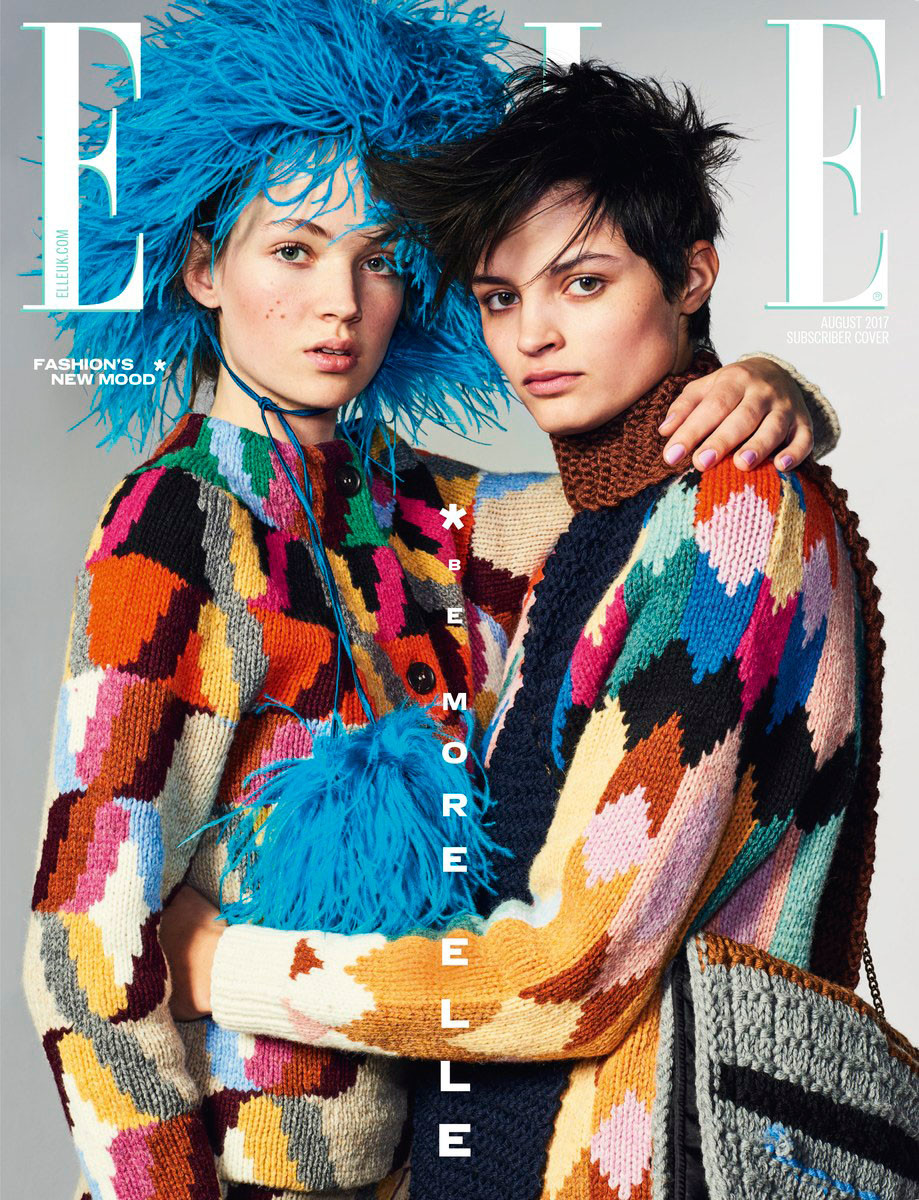 Bella Hadid, Queen of the September Covers, stands out from the Prada pack for Vogue Spain thanks to a headdress in a mossy shade of green. 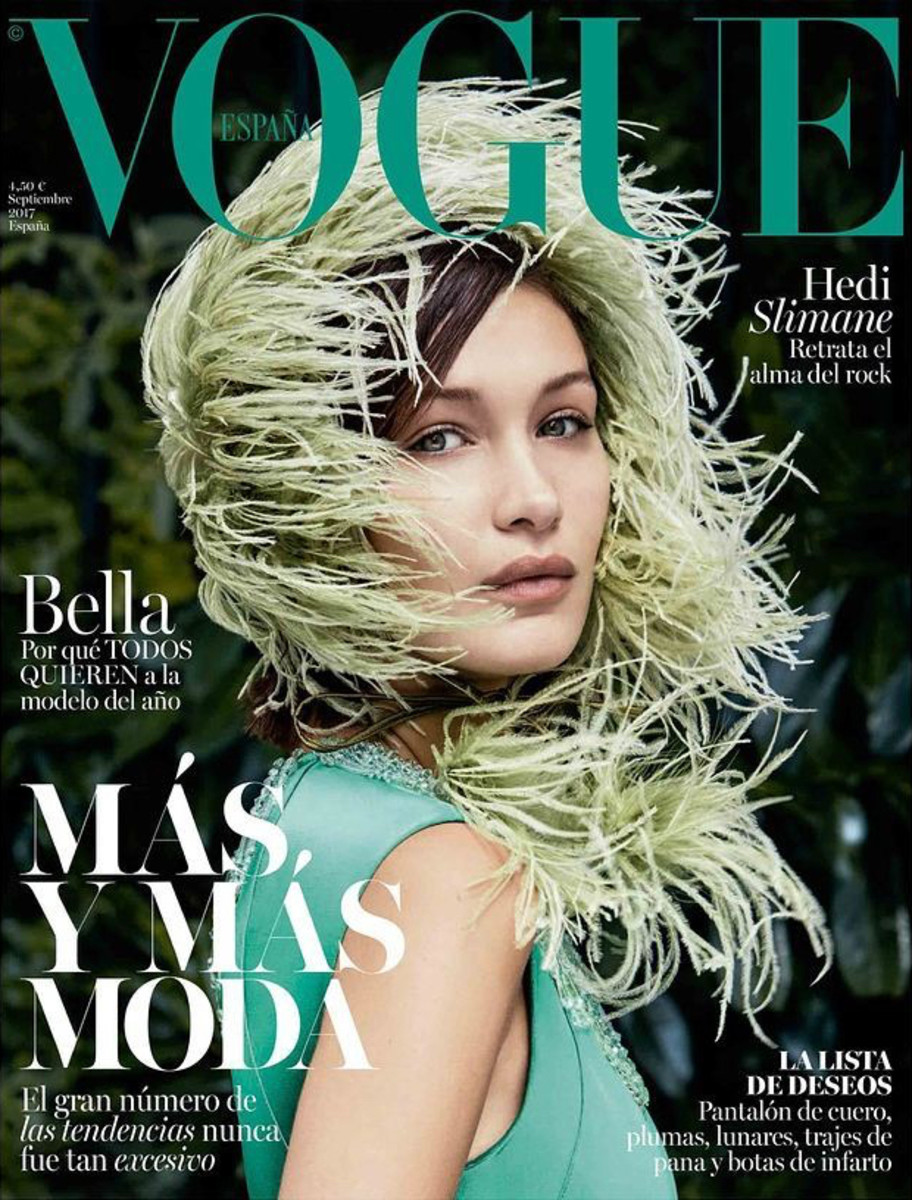 Marie Claire‘s Czech edition went for another head-to-toe Prada runway look on its September 2017 cover, complete with the collection’s patchwork fur boots. While this may be chic, I am willing to bet model Eva Klimkova is pretty damn cold without any pants. 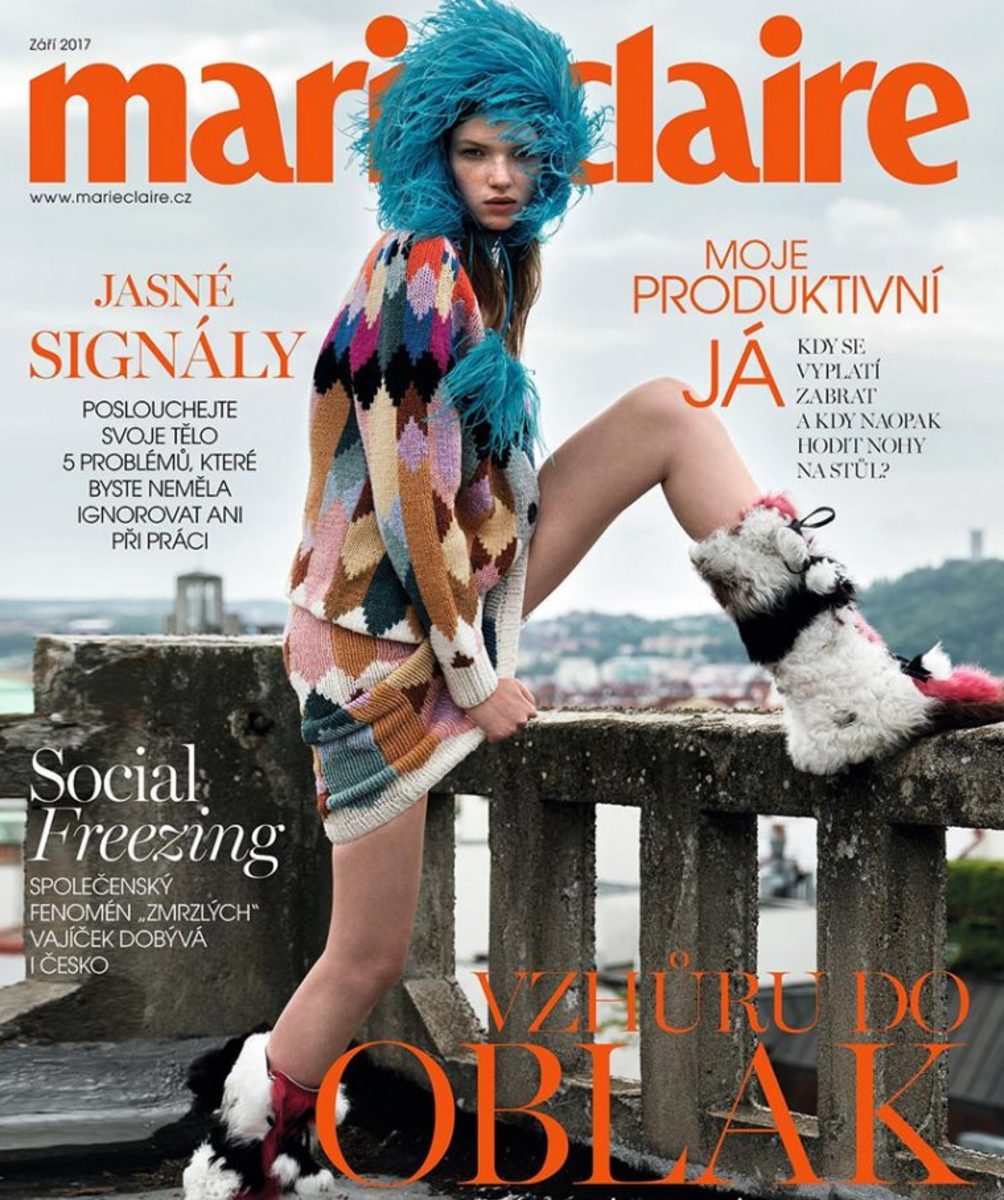 The Prada cap made it to the Paris news — Vogue Paris, to be specific, with a dreamy shot of Edie Campbell that highlights the feathered hat and not much else, fashion-wise. 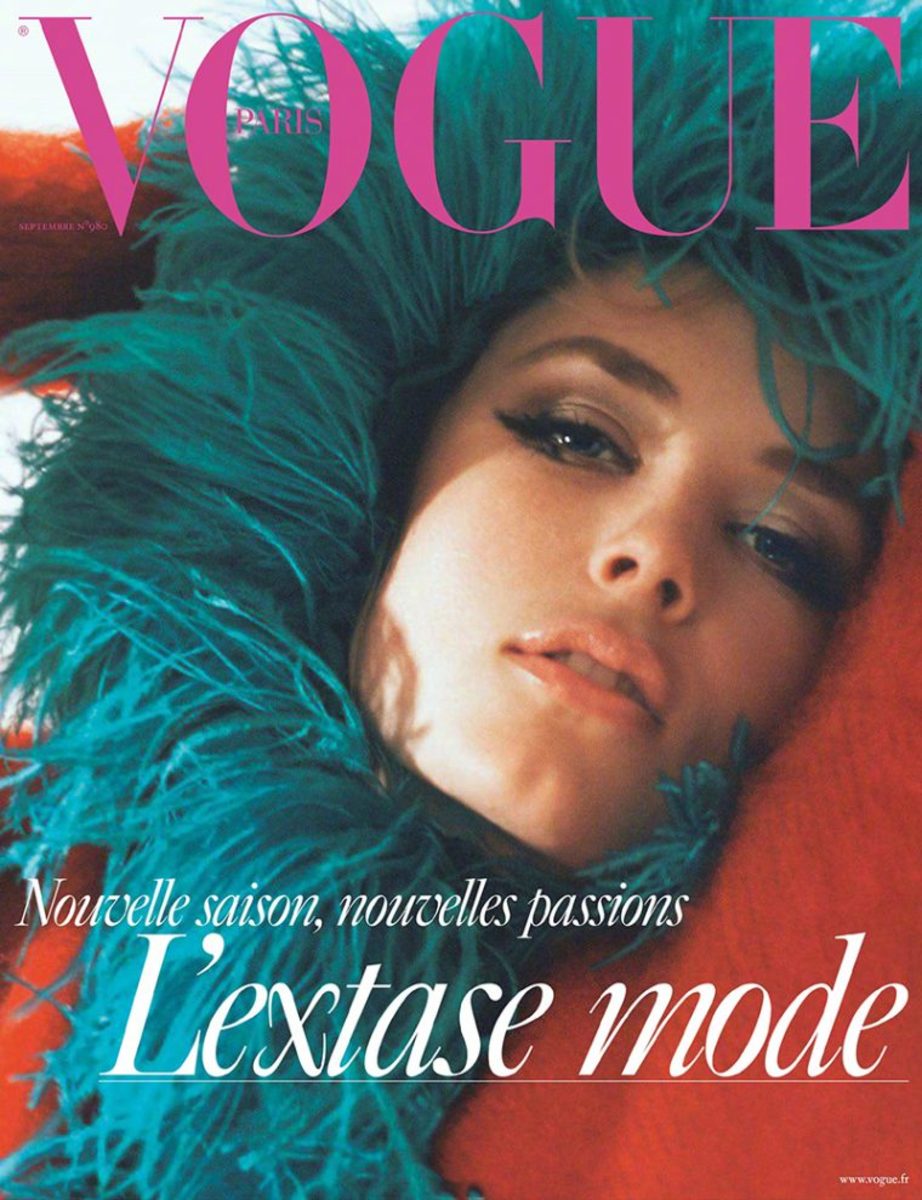 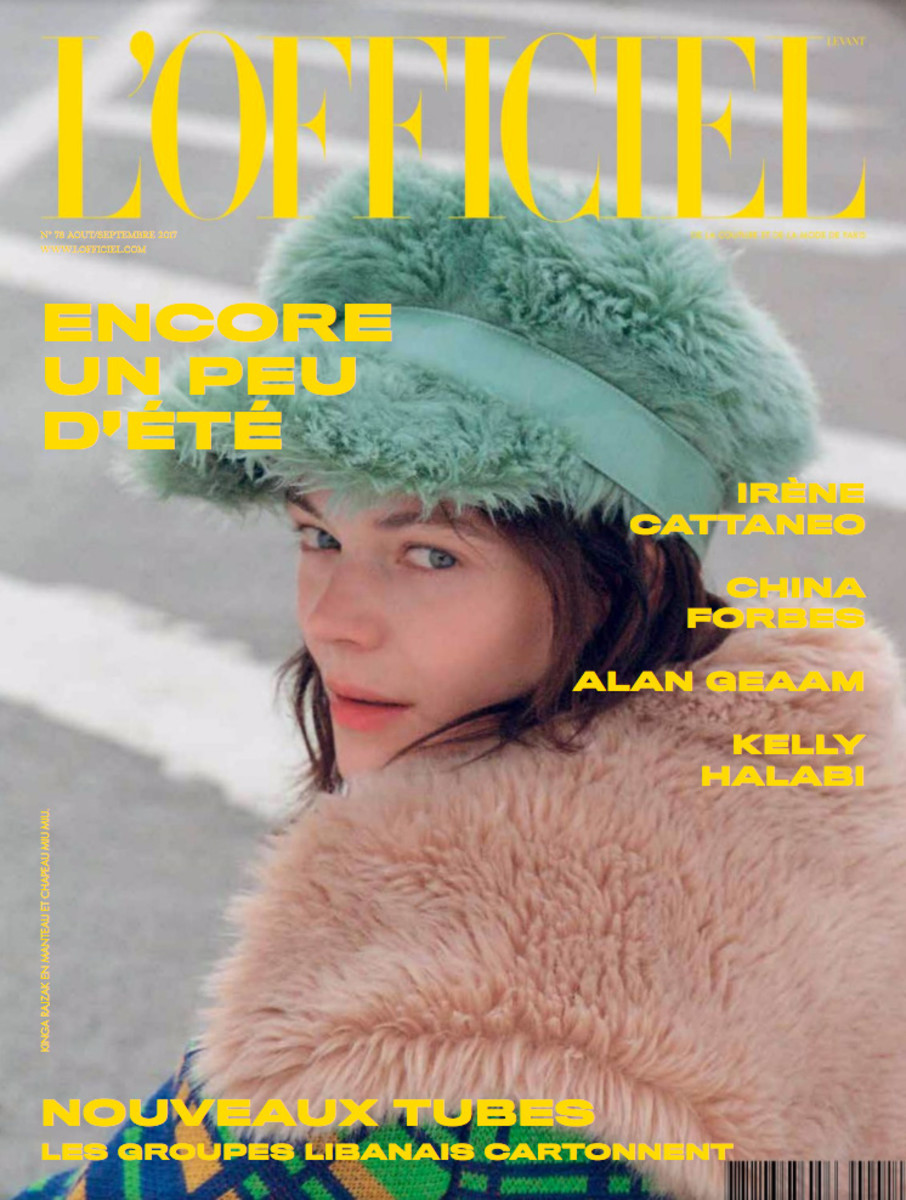 Hailey Baldwin lived out our collective dreams by posing with Miss Piggy (!) in Love‘s fall issue, wearing a pink hat that conveniently matches her co-star. 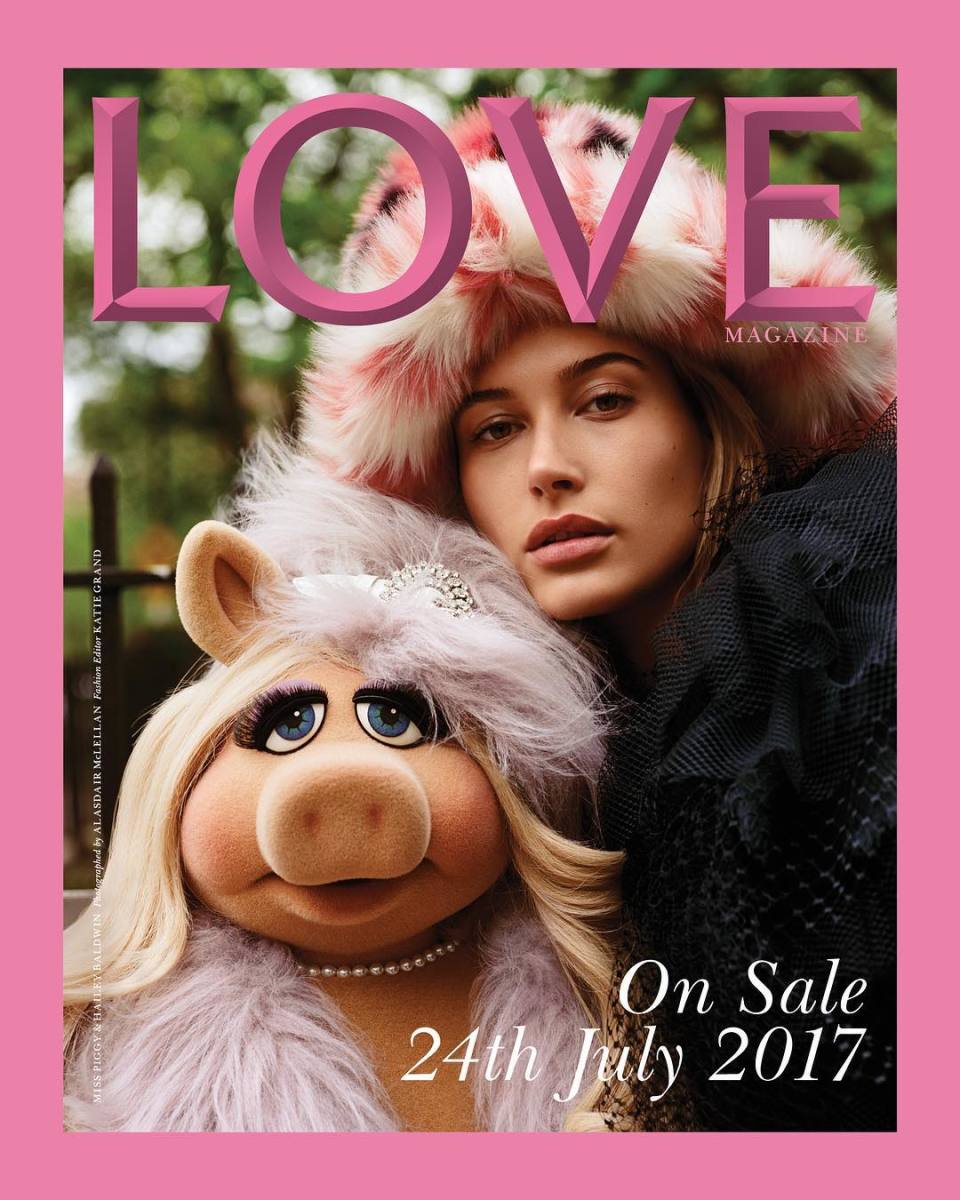 Even Kermit (shown here with Julia Nobis) got in on the action. It ain’t easy being green, am I right?

The Miu Miu faux fur hat was honored with an almighty American Vogue cover, via a John Currin painting of Jennifer Lawrence. 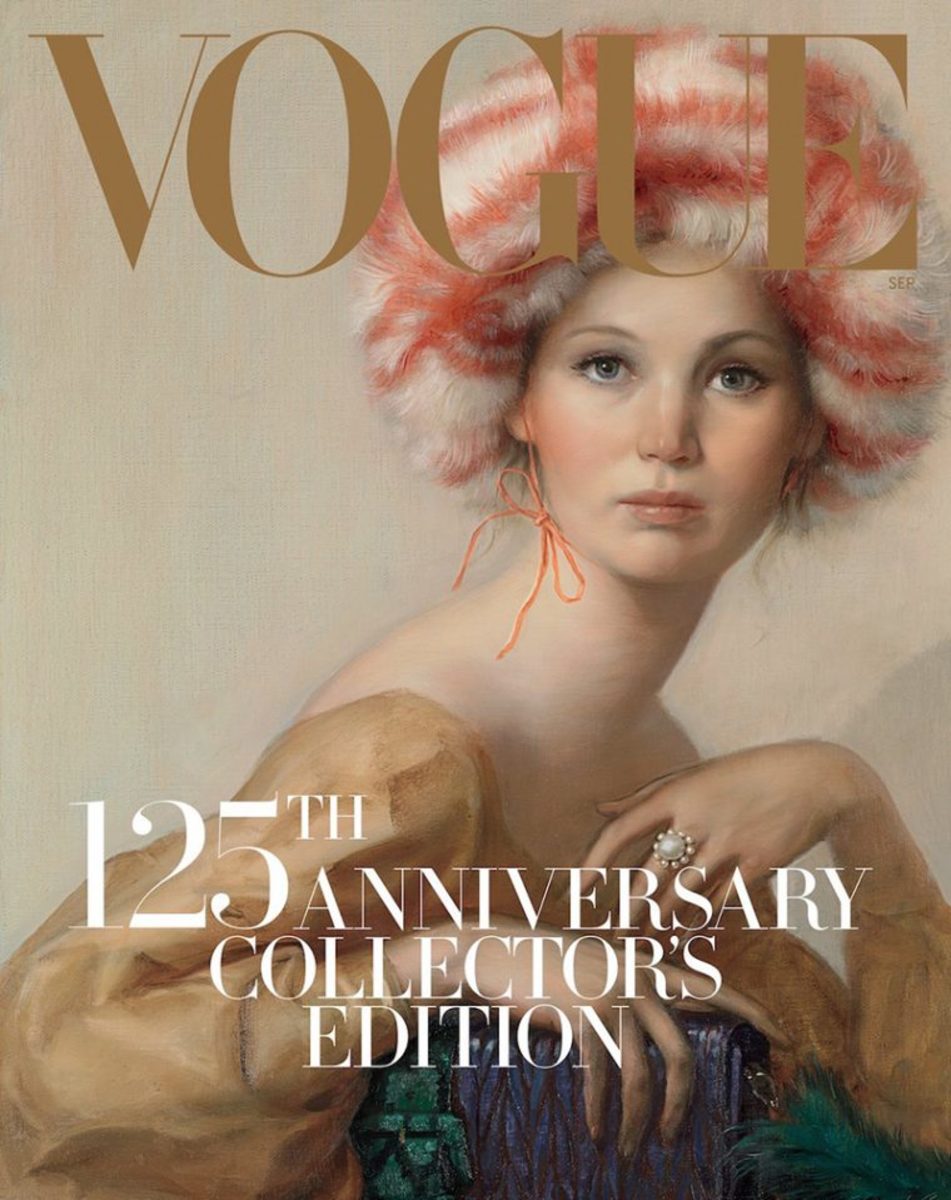 Finally, Australian indie favorite Russh was not satisfied with stopping at just a fuzzy hat, so the team styled Taylor Hill in a full hooded coat from the collection… 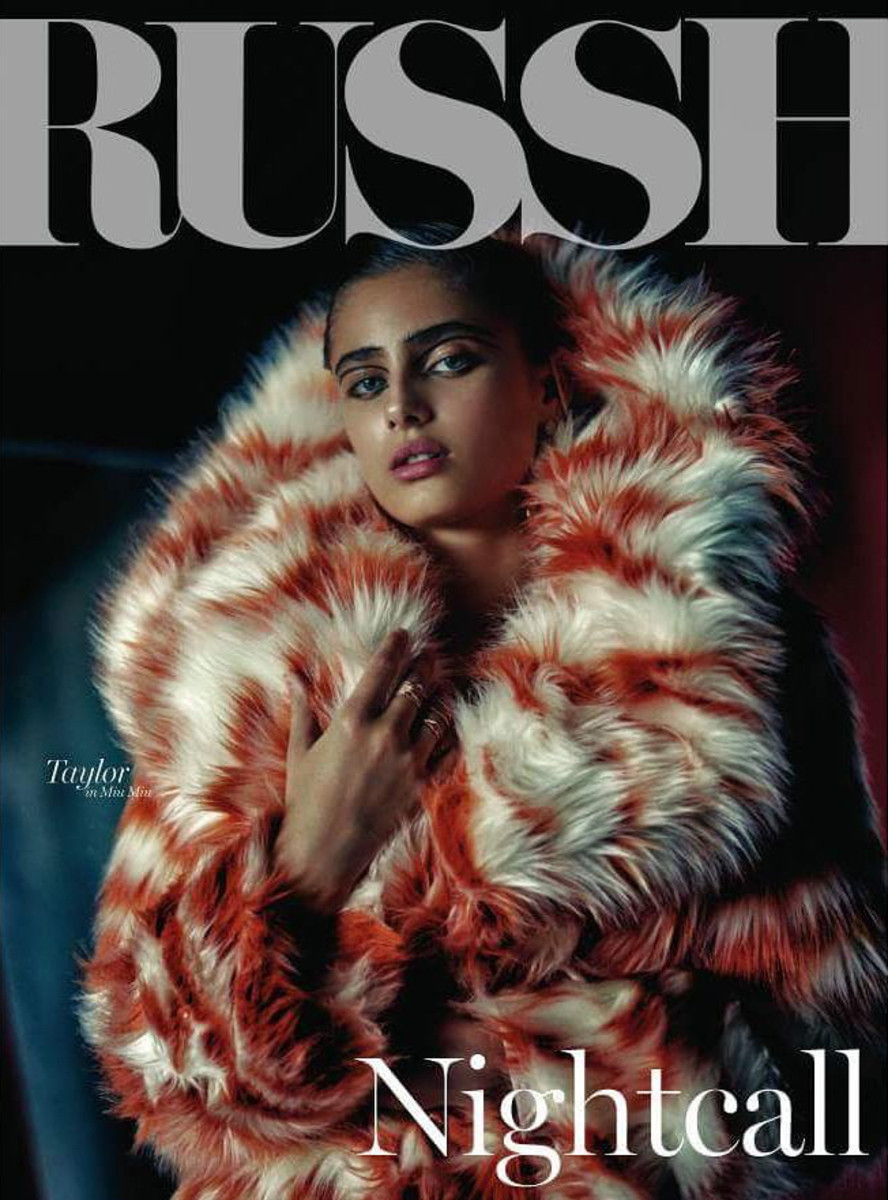 … the very same piece that Stella Tenant had the distinct pleasure of wearing while posing with Animal in Love.

Well, there you have it, folks. If it isn’t clear to you by now, the sartorial powers that be are really, really excited about feathers and faux furs in a rainbow of shocking hues for fall. It’s a daring look for sure and requires equal amounts of confidence and commitment, but if you’re the type to turn to street style stars and top editors for inspiration, we bet this is what they’ll be wearing as soon as the temperatures drop. Luckily, affordable versions are easy to find, and since colorful furs have been a runway mainstay for several seasons now, you’ll likely get plenty of use out of your purchase. Or, at the very least, it’ll make for one hell of a ‘gram.