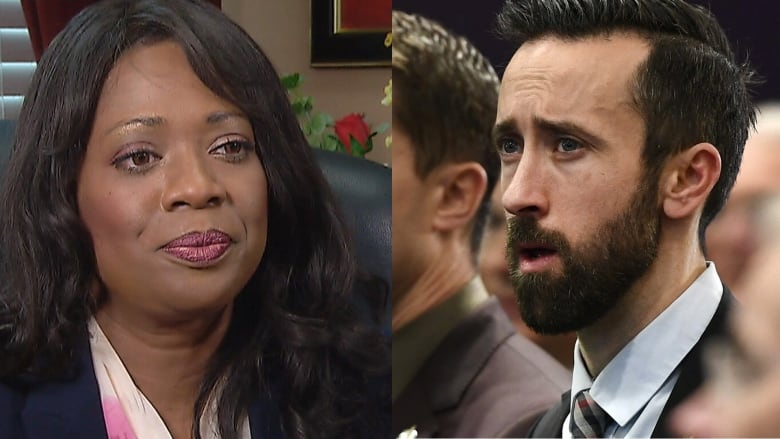 The mostly French-language video, anonymously emailed to Radio-Canada, is a recording of a virtual meeting O’Toole held with social conservatives in Quebec — people “who want to help out the campaign,” as one MP puts it during the conversation.

In the video, O’Toole tells those on the call he’s concerned about the government’s proposed legislation to ban conversion therapy and another bill that would broaden access to medical aid in dying.

Watch: Erin O’Toole reaches out to social conservatives (in French)

Conservative leadership contender made the comments in French in conversation with social conservatives from Quebec. 0:29

The leak comes just two days before the party’s only two official debates are held in Toronto, and as the role of social conservatives within the federal party is being hotly debated.

While some Conservatives have suggested that any public discussion of social issues such as gay marriage or abortion prevents the party from broadening its voter base, two of the four candidates in the leadership race — Leslyn Lewis and Derek Sloan — are social conservatives.

Their supporters could prove to be kingmakers in the race if no clear winner emerges on the first ballot.

O’Toole’s team has confirmed the recording is authentic. A spokesperson for Peter MacKay’s campaign said senior people on the campaign team were unaware of the video until CBC News asked about it.

In the video, O’Toole tells those on the call that he wants to take a closer look at the debate on banning conversion therapy.

Conversion therapy is the pseudoscientific practice of using psychological or spiritual counselling to change the sexual orientation of someone who identifies as LGBTQ2 to heterosexual. In March, the Liberals introduced legislation that would outlaw several aspects of the practice, including exposing a minor to it.

In the video, O’Toole says he has concerns about the legislation.

“It’s very important to respect the conversation between a priest and the members of their flock,” he says.

O’Toole’s campaign said in an email that his concerns have to do with “how the bill has been drafted,” adding that O’Toole has always been clear that “coercive, degrading actions that seek to change a person’s sexual orientation or gender identity should be banned.”

In the recording, the Ontario MP also reveals he “probably” will vote against new legislation that would expand access to medical aid in dying, saying he has “a lot of uncertainty” about the practice as both a Catholic and a lawyer.

‘A seat at the table’

O’Toole notes in the video that he voted against the previous bill on medical aid in dying.

In fact, his platform includes a promise to create legislation “protecting the conscience rights of all health care professionals” by allowing them to refuse to refer patients to services that violate their beliefs.

Last year, a provincial legislator in Alberta proposed legislation with a similar goal. Critics claimed that his plan could limit access to everything from medical aid in dying to contraception and abortion.

O’Toole has said that social Conservatives would have “a seat at the table” if he becomes leader. The video, however, shows him making an outright appeal to their values and for their votes.

“I have the support of some social conservative MPs who are very well known and very well respected, like Garnett [Genuis],” O’Toole says in French in the recording.

“If you vote for Leslyn [Lewis] or Derek [Sloan] as your first choice, I would like to receive your second position, second vote. Please.”

A spokesperson for O’Toole’s campaign said they believe the race will be close and will go to several ballots, “so it’s important we encourage members to fill out their ballots completely.”

MacKay’s relationship with social conservatives has been more fraught.

Before the campaign began, the former cabinet minister referred to social conservative issues as “a stinking albatross” around the neck of outgoing leader Andrew Scheer during the last election. MacKay later apologized for how the remark was received.

The Lewis campaign also released an attack ad featuring a recording of MacKay saying that social conservative issues were something to “park … until we get the country moving in the right direction again.”

At one point during the video, before O’Toole joins the call, Genuis is asked to what extent the Quebec social conservatives involved in O’Toole’s campaign can marshal support.

“There’s someone who likes to be quite private and discreet but who has been working to talk to evangelical churches in Quebec about participation in the leadership race,” Genuis says in the video.

Genuis says in the video that while many of these socially conservative voters would support Lewis or Sloan as their first or second choices, they will “certainly come to us ahead of MacKay.”